Fall is Here: A Trip to Riley's Farm and our first Homeschool Group Field Trip!

We had our first, hopefully of many, outing with a group of homeschooling families yesterday.  It was fun to be with a group of people that don't think we are a little strange for considering this education plan for our kids.  While I think it's important to be around people that aren't a thing like you, periodically, it's good to be able to breathe and feel like you are speaking the same language as another group of people. So besides the fact that we were able to go on a great trip to a fun place, the camaraderie was priceless.
It was my second trip to Oak Glen with the girls.  The year before a friend of mine and someone she knew and our kids all took a trip out there.  I had never been before and it was a fun first trip.  But this time it was a little different.  The group, Tapestry of the Heart, planned the field trip, which was a tour of Riley's Apple Farm.  We are not, formally, members of the group since I figured I couldn't go to much since I'm still working, but after the trip, I think I'll put in and join. I have one very good friend in the group and a friend from elementary school that I'm so glad to have gotten reconnected with through the group. It'll be good to have the support, even if I can't be at much and maybe things will change next year.  Who knows.

Anyway, the tour began with music, which is always fun.  One of the things that really stuck with me is when the musician was talking to the kids he said, "so long ago, kids didn't have ipads and game systems and tvs.  In order to have fun, you made your own music. So, we don't have any of that today, right?  But is anyone here not entertained?"  So. True.  I want the girls to be able to have fun, play and entertain themselves without all that.  Not to say we never let them play with these things.  There is a time for everything.  But it's not often.  Imagination, creativity and communication with others is so, so important. And stinking fun, too. 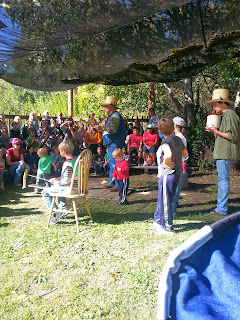 Next, they took our group to an old log cabin.  There was lots to do here.  Much of it was a little old for the girls but they still had fun and learned much. 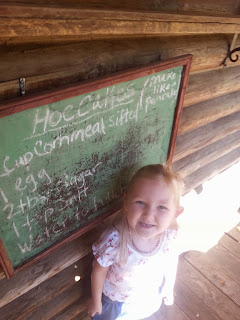 Claire really, really wanted to help with the apple peeling, coring and slicing.  I don't think they would have let her, since she's still pretty little, but she enjoyed watching.  At home, I may have let her peel the apples and maybe will soon.  The would peel, core and slice the apples, then hang them on a string to dry.  It was neat. 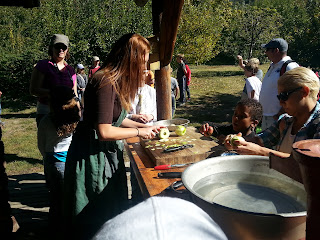 Inside the cabin was a bed and a table with ink wells and quill pens.  Kids could try writing with the pens at the tables.  This was VERY popular with the elementary age kids that were in another group.  Claire waited patiently for her turn to do some writing of her own.  She wasn't as sure about holding the pen.  But she scribbled on a couple sheets of paper and was very happy with the results. 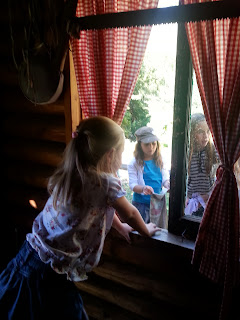 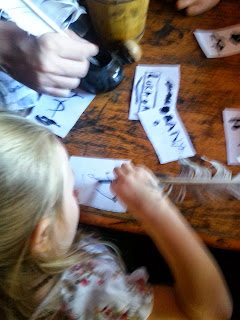 It was able then that she got a little hungry.  Luckily, mommy remembered to bring snacks this time :-) 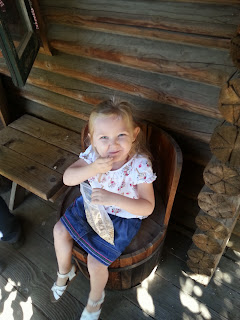 Next, the kids helped make rope.  Claire was a little short for this but participated anyway.  For some reason she was VERY excited about the rope making.  Not sure it met with her expectations, but a learning experience nonetheless. 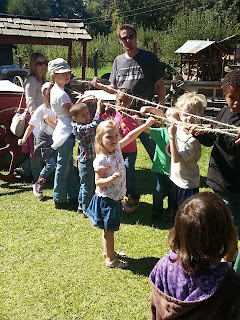 However, this mortar and pestle was the BIGGEST hit of the "rope making" area.  Claire (and Ashlyn) could have hung out, grinding corn, for the entire afternoon.  I need to remember this.  Anytime I need to get something done, I may be sending them outside with something to grind with my own mortar and pestle.  I may also be in the market for a bigger one.  It's always surprising what they get excited about. 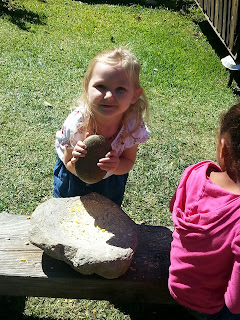 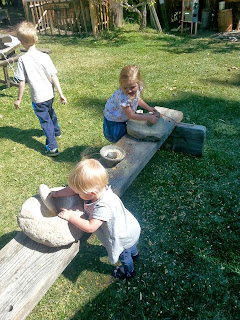 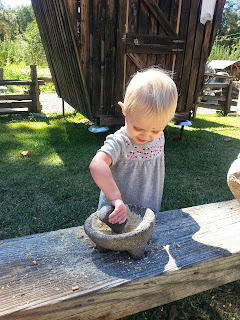 The hayride was another favorite.  We rode around the farm and then halfway through, the driver stopped and talked to us about the farm, the apples and wild animals around the farm (bears, deer). Then they let the kids get off and look at the pigs and chickens with special care to warn the kids NOT to put fingers into the chicken coops. 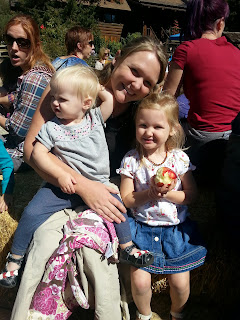 Next stop was cider making.  Ashlyn was getting tired so we did a lot of babywearing at this point.  It was pretty funny to her Claire describe the cider making process to Christian the next day.  "Um, I pick up apple, I put it in 'nare, I waited in line, I went potty.  Yup.  Halfway through cider making, she decided she had to go potty.  So we took the trek up the hill to the bathrooms.  Apparently, this was a very important part of the process. 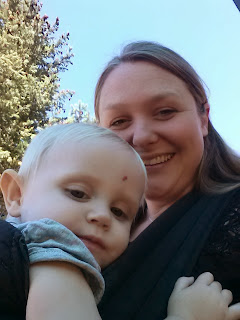 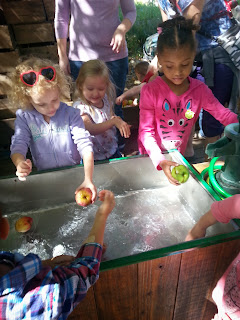 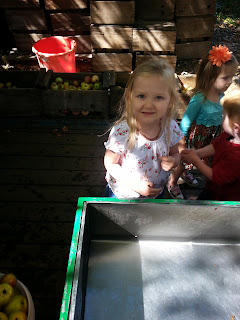 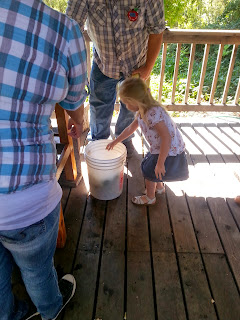 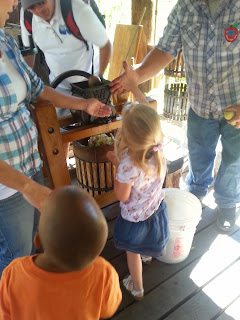 The last thing the kids did was made little "kazoos" out of rubber band and popsicle sticks.  I helped her make it, since the rubber band was a little difficult.  She didn't quite get how to make it made noise, she'd always put it too far into her mouth.  But she had fun anyway.  A couple of the older girls came by Ashlyn's stroller and played for her.  She loved it and it really was the sweetest thing to watch. 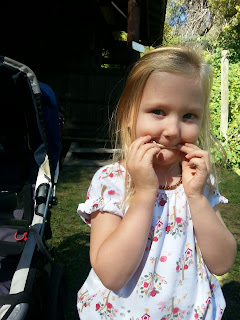 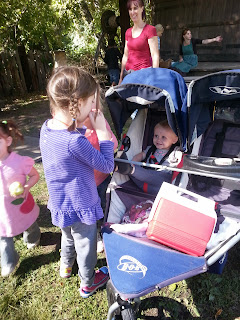 However, at this point, we were hitting the "we haven't had a nap today" wall.  The girls were getting cranky and tired.  One last stop was at the General Store to buy some cider for Daddy on our way out.  It's generally a sign of a fantastic day, when you leave with a big, overtired grin, and a huge jug of cider in your lap.  Many thanks to Rachael and Tapestry of the Heart for putting this together AND for the invite.  Would love to hang out with these people very soon! 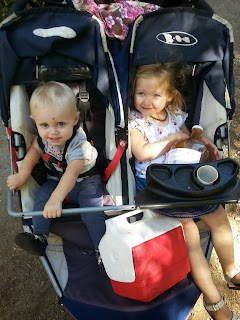