Ashlyn Esther: A birth story. . . and coming to terms with the unexpected. . . 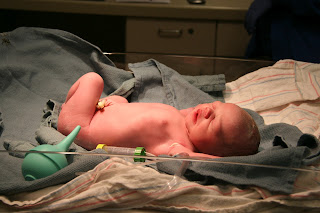 I wish the story ended there. Everyday, since her birth, I wonder at what the next part of this story was all about.  Why? Is the question that runs in my mind over and over.

The resident who had attended the birth (and may have actually caught the baby from some of the pictures my mom took) started to massage my stomach to try and get the placenta out.  She worked for some time and then the OB came over to see what was going on.  He began to work on it.  Nothing was coming.  He looked up at me and said, "the placenta isn't coming out, I'm going to have to try and go in after it."  He then did one of the more painful things I've experienced.  He tried to manually get it out.  He tried twice and on the third time told me he was going to give me a shot of morphine to try and keep me from being in so much pain.  All the morphine did was make me feel loopy.  I still could feel everything.  They decided to take me into an OR and perform a D&C.  I held Ashlyn for a few minutes.  Tried to nurse her a bit but they had to take me away.  I passed her off to Christian and my mom. "She's beautiful.  You'll see her when you get out."  I was told.  I signed a few forms about surgery and blood transfusions and I was taken into the OR.
That night was busy for babies, apparently.  Two nurses waited with me as the doctor, apparently, went to deliver two more babies.  The anesthesiologist finally came into the room.  He began ordering the nurses around.  Then he looked at me.  He told me he was going to put a mask over my face, that I shouldn't remember anything.  He was right.  I woke up in the hallway of LDRP.  The same anesthesiologist was looking at me and in a softer tone, but still very direct, told me they had to perform a hysterectomy.  I was stunned. I didn't know what to say.  I prayed I was dreaming.  Or he was kidding or he didn't really mean to say hysterectomy.  I don't even know if I said anything to him.  It might have just been a very feeble, "what?"
What I missed while I was under anesthesia was that Dr. Yu began the D&C but still couldn't get the placenta out.  Apparently, my uterus was not the typical shape.  I never knew this.  My mom remembers that a gynecologist I saw when I was a teenager pointed it out but I don't remember this at all.  It was shaped like a heart, with one half much larger than the other.  During my pregnancy, I thought I never experienced Braxton Hicks contractions.  I DID notice one half of my abdomen tightening up and my belly being lopsided from time to time but assumed it was the baby pushing against one side of my stomach.  Now I know that was my  uterus tightening with contractions and that odd shape was the shape of my uterus.   The placenta seemed to be attached to the highest point in my odd shaped uterus.  His longest instrument couldn't reach it. Meanwhile, I was losing a lot of blood.  Turns out I lost 2.5 liters and required a blood transfusion.  Finally, his back against a wall, Dr. Yu rushed out of surgery and found Christian in the nursery with Ashlyn.  Both his and my parents sat on the other side of the nursery glass in the waiting room.  The doctor took him aside and told him, "I'm going to have to perform a hysterectomy to save her life."  Christian, bewildered, replied, "There's nothing else you can do?!"  Dr. Yu repeated, with more intensity, "I'm going to have to perform a hysterectomy to save her life."  "Ok," said Christian. The doctor briefly put his hand on Christian's shoulder and hurried back to the OR.  Christian saw our parents through the glass of the nursery, all looking at him with questions.  He sent a text message to his dad who then told the rest.  He picked up Ashlyn and sat in the rocking chair.  He knew everything had changed and the shock I would feel when I woke up.
I was taken to CCU (Critical Care).   Over the next several hours, I sat in CCU with my mom and then Christian.  A Ghanian CCU nurse sat at my doorway on a computer and brought me ice, soup at lunchtime and told me that I'd have to wait to go back to LDRP to see my baby.  I was told, first, that they would bring her to me.  Then was told I would have to wait for a room.  During my stay in CCU I was seen by two hospital Chaplains (one Protestant, one Catholic) and the sweet resident who attended the birth.  One nurse wheeled in a hospital breast pump.  I tried to pump for a while and got some colostrum that the nurses took and placed in a bucket of ice. "When can I see my baby?"  I asked.  "As soon as we can get you a room."  So I waited.  Between shock and tears over what had happened and a whole lot of pain. . .I would ask to see the baby.

Finally, at about 3 in the afternoon, they agreed to let me go back to LDRP.  I told the nurse who was taking me back, "I just want to see my baby"  She replied, "Honey, I want to see your baby"  They wheeled my bed through the hospital until I was in a room in Labor and Delivery.  Ashlyn was waiting with two nurses at my door on one of those plastic hospital bassinets.  They gingerly transferred me to the bed and placed her in my arms.  Christian, my mom and Cindy and Christy Samson were all there.  I finally got my girl.  We nursed for a little while.  I tried to keep from crying.
Over the next several days, there were a lot of tears.  I'm pretty sure every doctor who was on call came to see me.  They were all ones I'd loved and seen in my prenatal appointments.  They were all so supportive and sweet.  Bedside manner was pretty important these days.  The anesthesiologist even came in.  The doctor who performed the surgery came in twice and checked on us.  We felt loved by the staff, concern for my well being and deep sorrow for what had to happen.  No one came in with a "we did what we had to do to save your life, now get over it" attitude.  We were grateful for that. They came in with grace and love.  For that I will be forever grateful.
It's been about 3 and a half weeks.  It's taken me about that time to get this all down.  I would start part of it and then be overwhelmed and stop.  I am living in a really odd place, emotionally.  So grateful for our little family.  So blessed by my new baby girl.  So in love with the two daughters God has entrusted me with and so, so thankful to be alive.  But at the same time, there are days when the fullness of this and how much our lives has changed and how quickly it has changed hits me like a ton of bricks.  We always thought we'd have a large family. We love kids and at the start of our marriage put that arena of our lives into the hands of God.  My pregnancies have been easy and both of my births were completely natural.  Yet, according to the pathology report, I had developed "placenta accreta" a condition where the placenta attaches to the uterus. While it is usually caused by previous uterine surgery, prior c-sections etc., I really had no risk factors for this (although, my history of fibroids  may have had something to do with it). This complication was so shocking, so totally out of left field.  When we handed the control of our family size over to Him, never did we dream He would cut us off at 2. 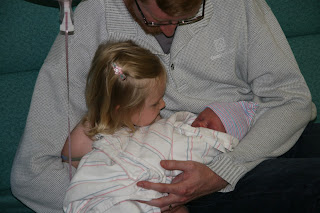 So now I am trying to live in the moment and try not to worry about what comes next but it's not always easy.   We chose "Ashlyn" for her name because we liked the meaning.  (Esther was Christian's grandma's name). The Irish name "Aisling/Aislinn" pronounced "Ashlyn" means "Dream/Vision".  We love Proverbs 29:18 "Where there is no vision, the people perish: but he that keepeth the law, happy is he."  It was a reference to a verse we had chosen for our family.  We want God's vision to be the center point of our family and knowing and teaching and living the reality of God's law and His grace is so important to us.  We want to pass that vision and that faith on to the next generation.  "As arrows are in the hand of a mighty man; so are children of the youth" (Ps. 127:4) reaching out to generations forward. This week, however, God showed me an aspect of Ashlyn's name that, until this happened, I had never thought about before.  I was rocking Ashlyn to sleep in the morning. She was cranky and crying and I knew she was merely tired and needed a nap.  Claire came into my room and stood next to the rocking chair.  "Do you want to sing to her?"  "K," said Claire.  I immediately drew a blank.  I used to sing "Solla Sollew" to Claire when she was tiny since I directed Seussical the Musical when I was pregnant with her.  But there wasn't really anything like a lullaby in Thoroughly Modern Millie so I couldn't think of anything.  Soon, a hymn we sang at our wedding filled my mind.

Be Thou my Vision, O Lord of my heart;Naught be all else to me, save that Thou artThou my best Thought, by day or by night,Waking or sleeping, Thy presence my light.

High King of Heaven, my victory won,
May I reach Heaven’s joys, O bright Heaven’s Sun!
Heart of my own heart, whatever befall,
Still be my Vision, O Ruler of all. 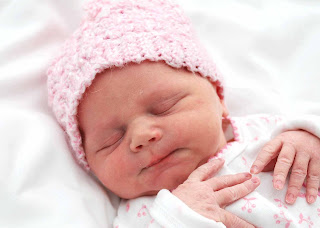 God knew this story before I was pregnant.  Knew it before we got married.  Knew it before I was born. I will still grieve my permanent loss of fertility.  There are still days where I just cry for what will never happen. I still cry when people bring it up and have a hard time talking about it.  But "whatever befall," His vision is best.  Whether that includes adoption of more children or just training up our two girls, our family is still in His hands and Ashlyn is a "good and perfect gift" (James 1:17).
Posted by Sarah at 11:16 AM 14 comments: