Well, my summer vacation got off to a fairly rocky start.  Our cat, who normally is very low maintenance, began to throw up. . . a lot.  At first, I thought it might be her food.  But after changing food several times, Tara was still throwing up after most meals.  Then, the week after I got done with school, she started doing something she's never, ever done before.  She started peeing outside her litter box.  This was just not acceptable at our house.  I was not going to have a house that smelled like cat pee AND it was clear that Tara just did NOT feel good.  So we found a local vet through a local interest facebook page for our area and took her in.  Turns out, a bunch of tests and $300 later, Tara had a pretty nasty urinary tract infection.  Try giving antibiotics through an oral syringe to a cat for nearly a month.  Yeah. Not my favorite.  But as of right now, she seems like she is doing fine.  I do need to make a follow up appointment at the animal hospital to make sure she is completely over her infection.  We really don't have the money to spend on this cat so hoping we get the all clear.  I don't want to have to make upsetting decisions about her if this thing has caused more damage, damage we really couldn't afford to fix. 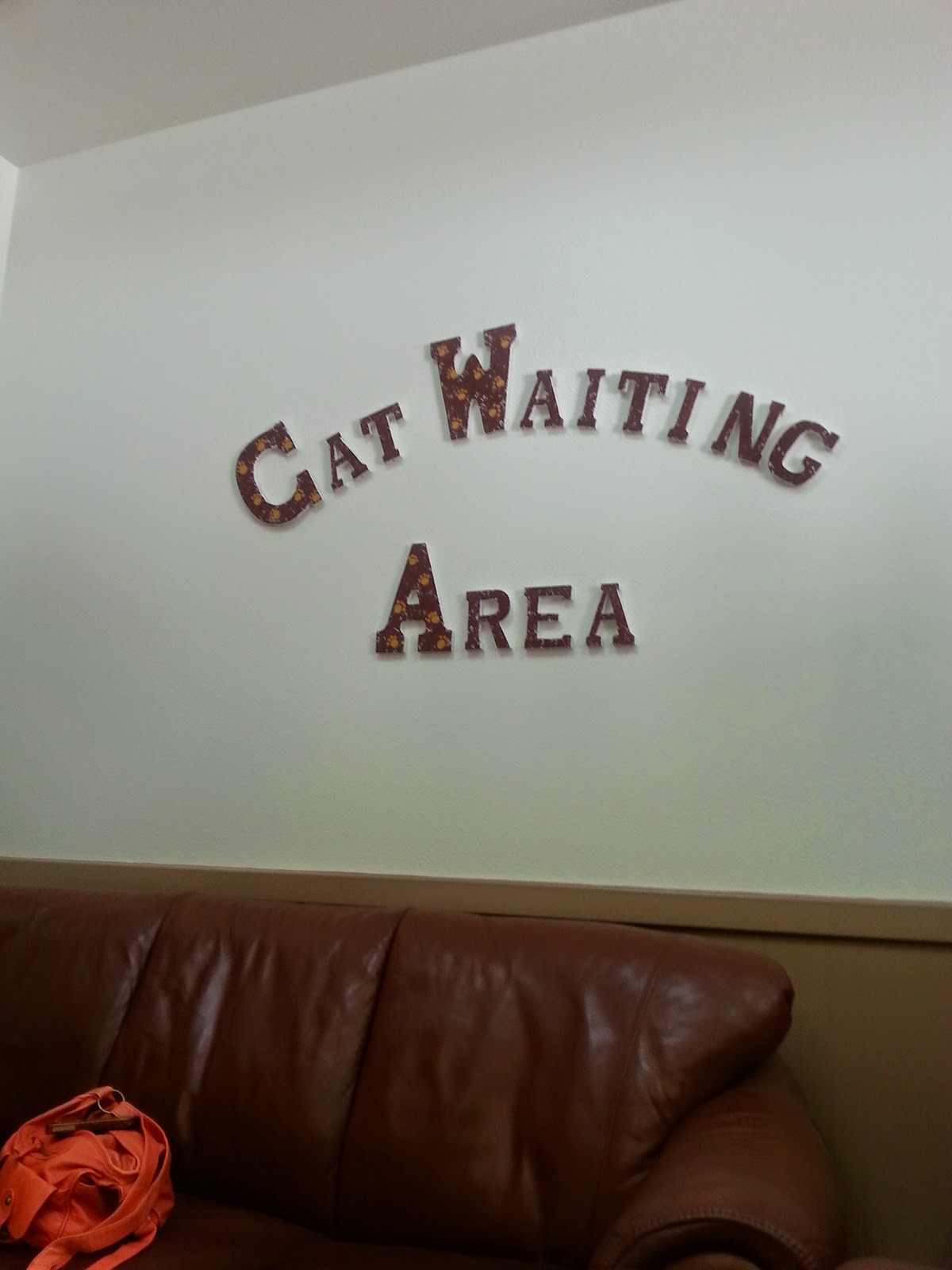 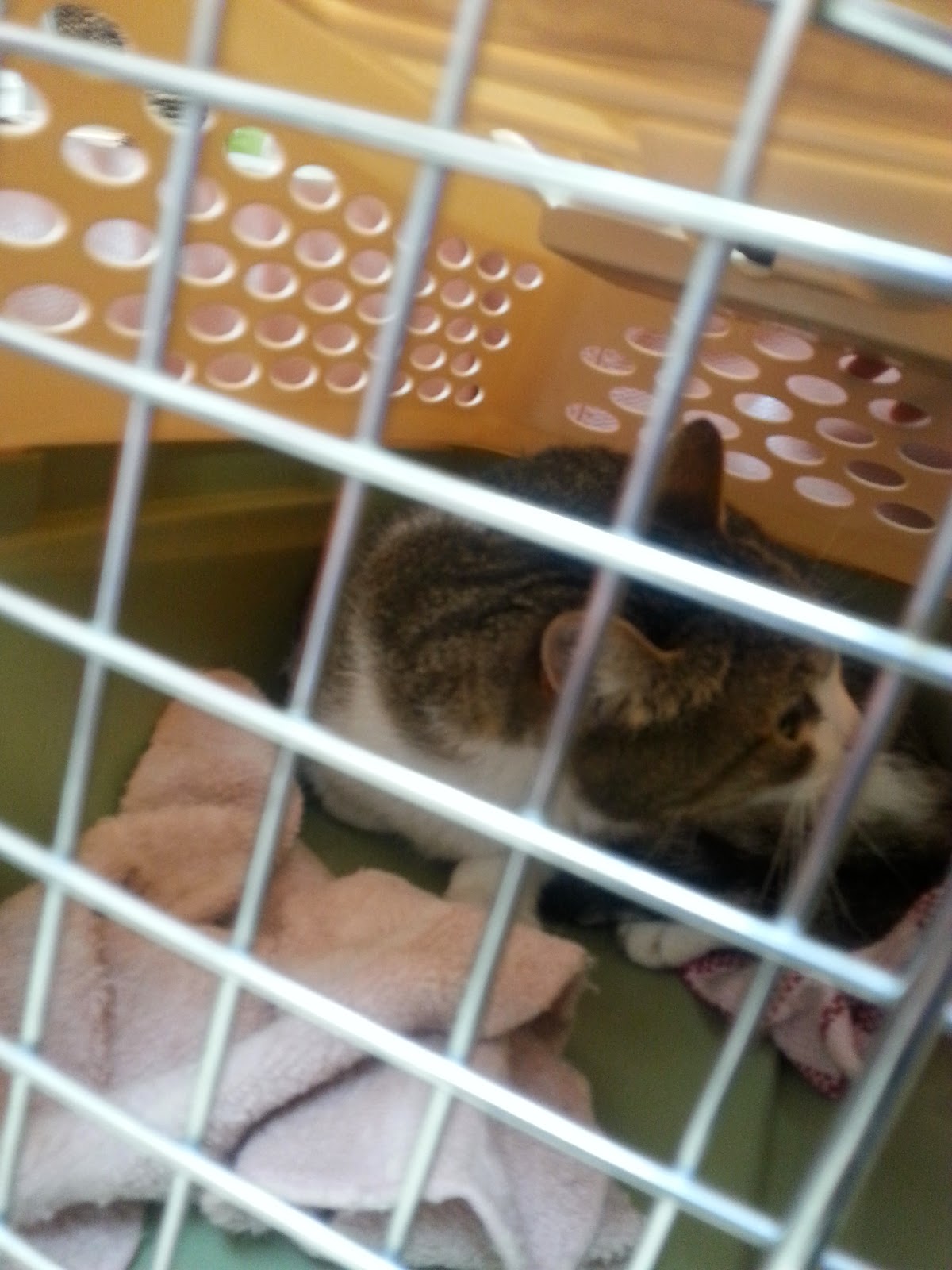 In late June, our neighborhood HOA put on a fun event at the park across the street.  Normally, I have no use for the HOA and the management company that controls it, but I will admit that they throw some fun neighborhood get togethers.  They do a makeshift pumpkin patch in the fall and then this event in the summer complete with petting zoo, food vendors, face painters, jump houses etc.  Ashlyn napped for most of it, but Claire enjoyed the whole thing and it was nice to get out and chat with neighbors we don't always see. 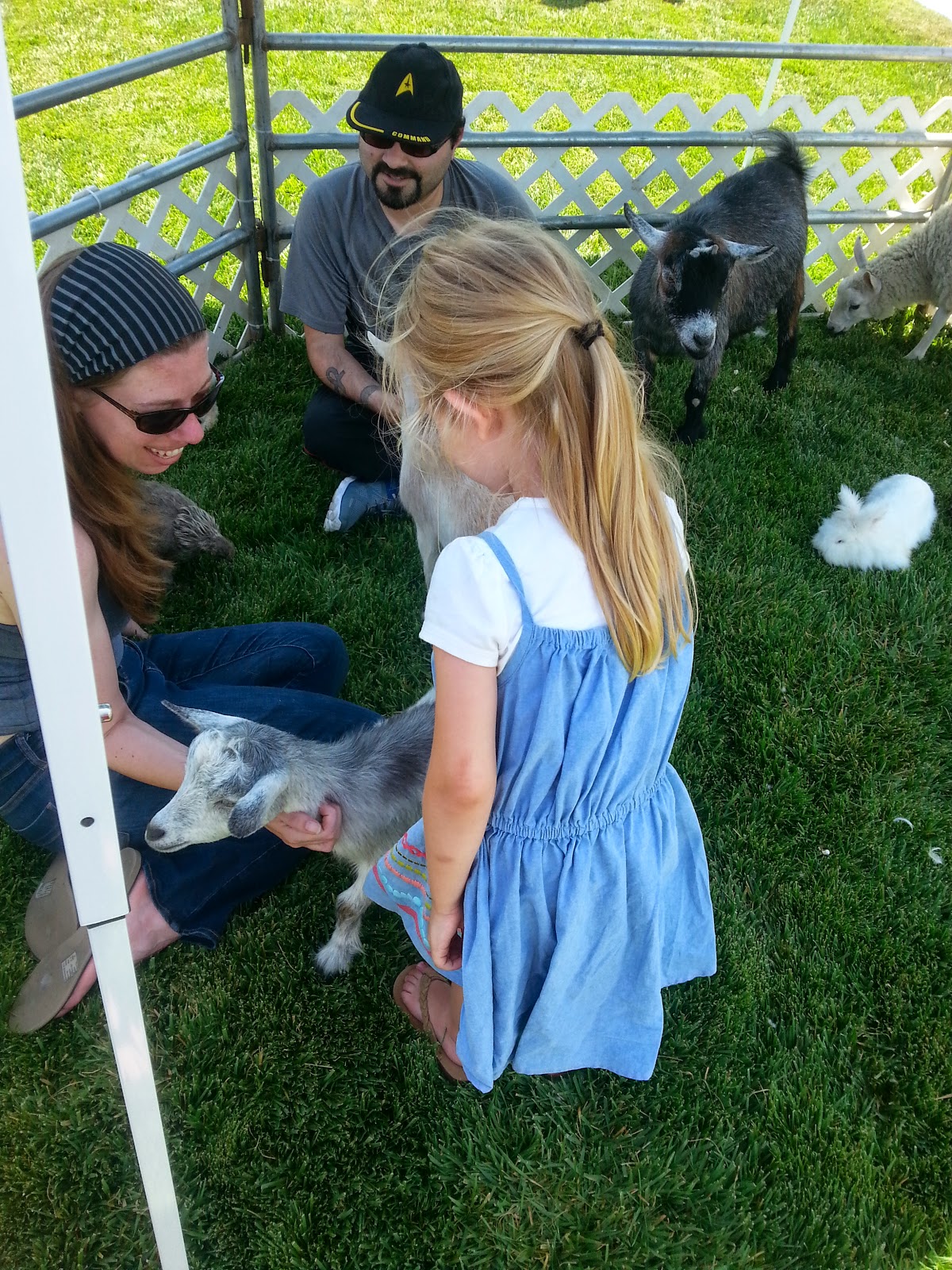 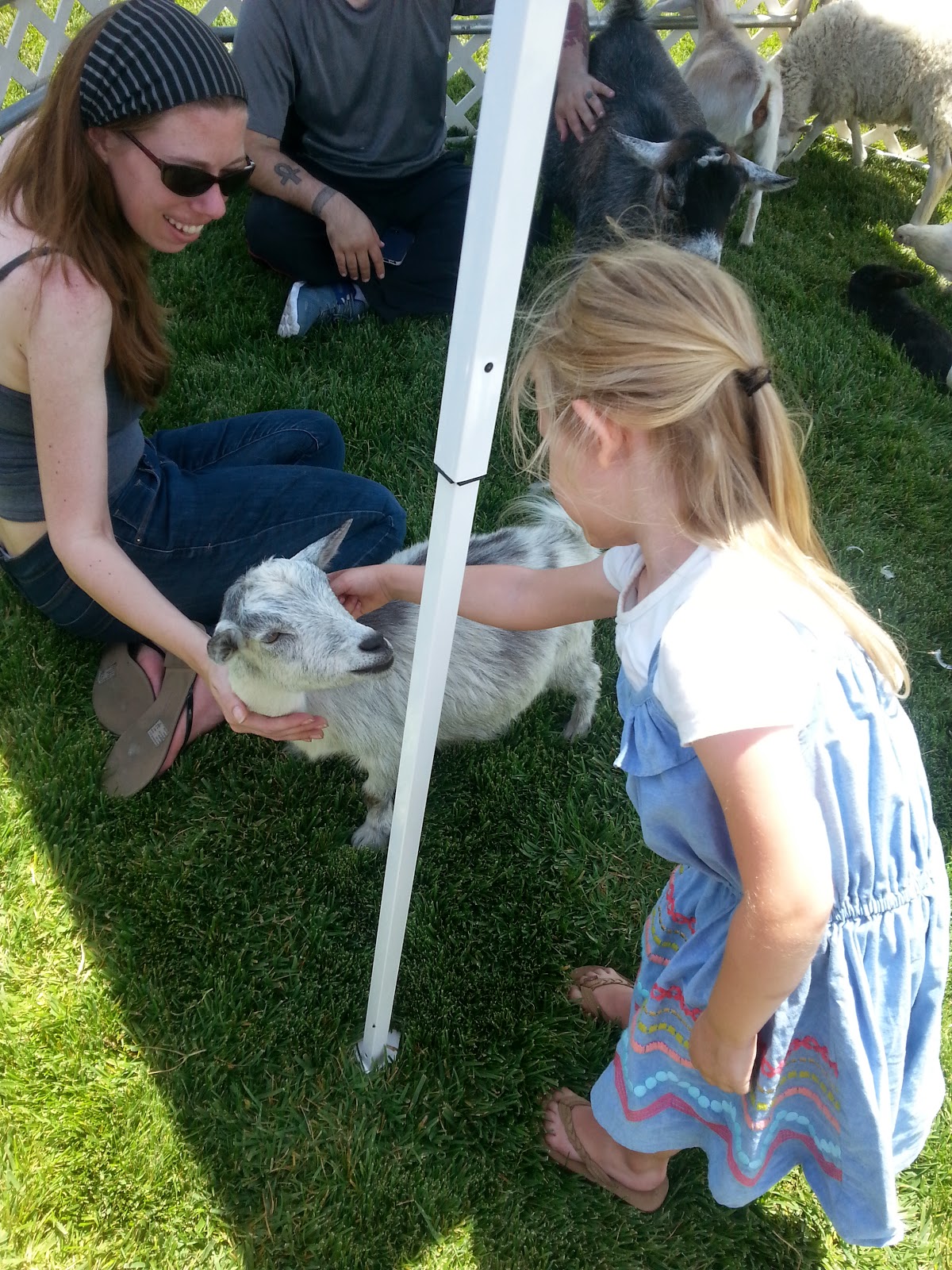 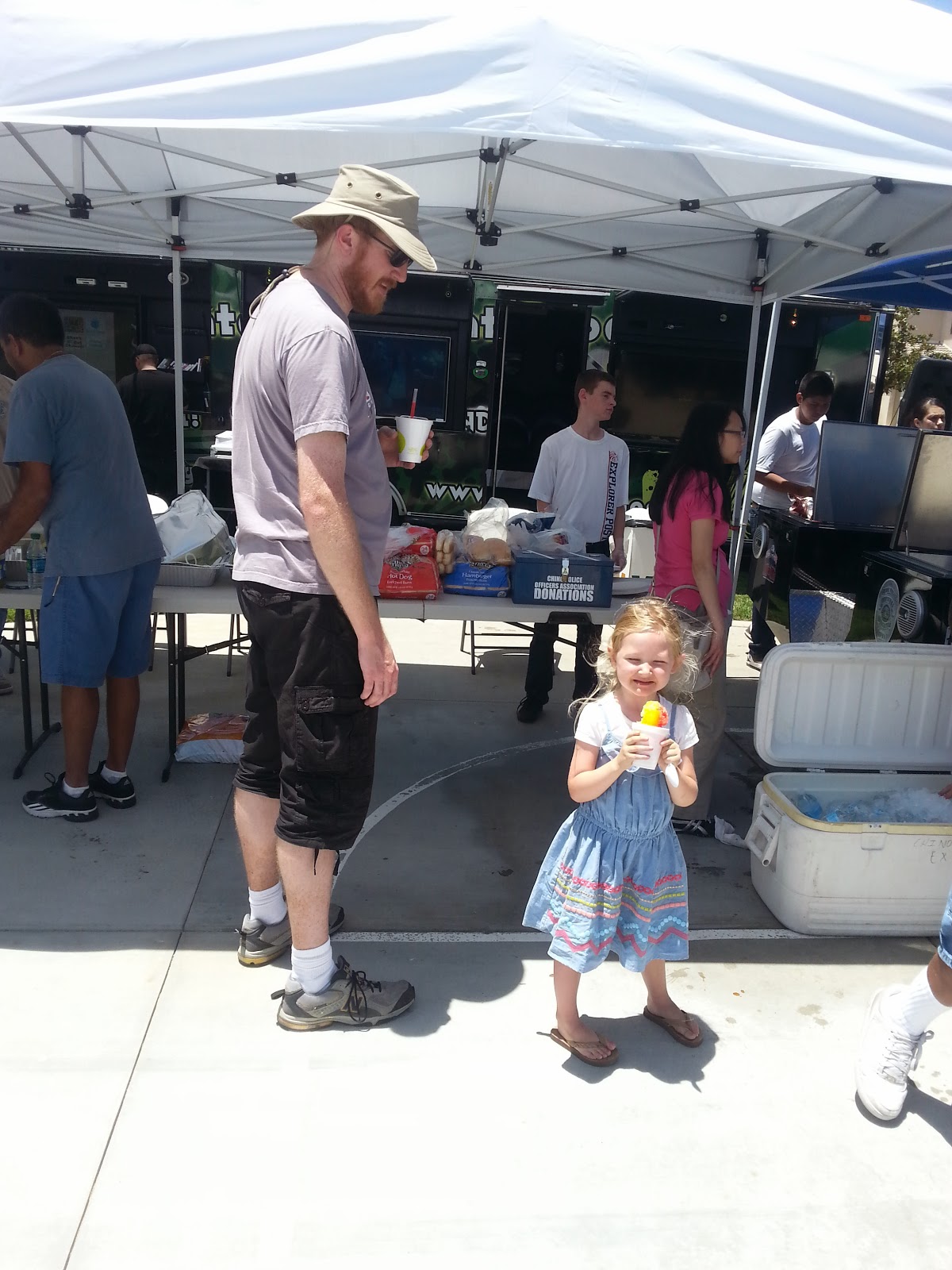 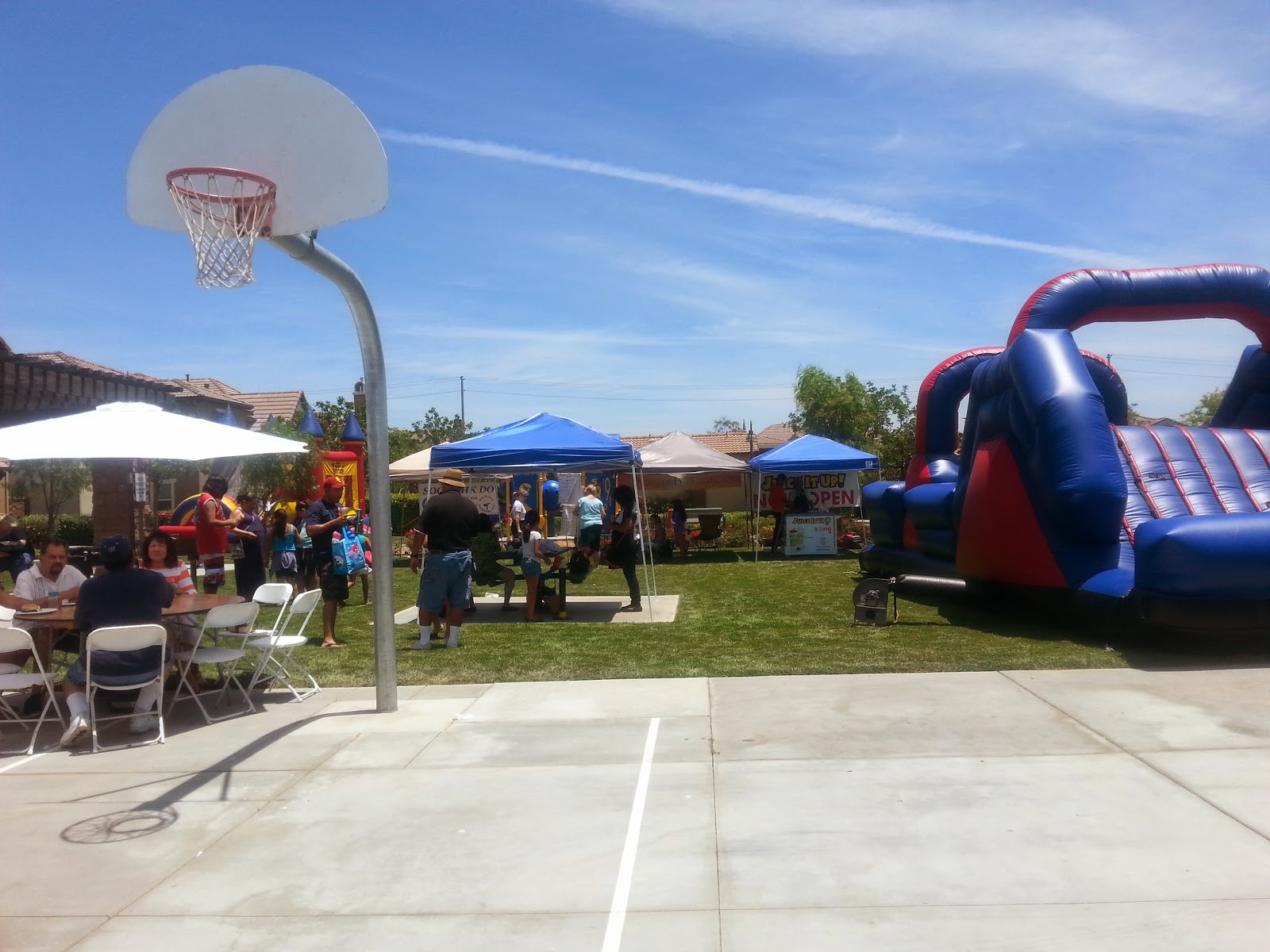 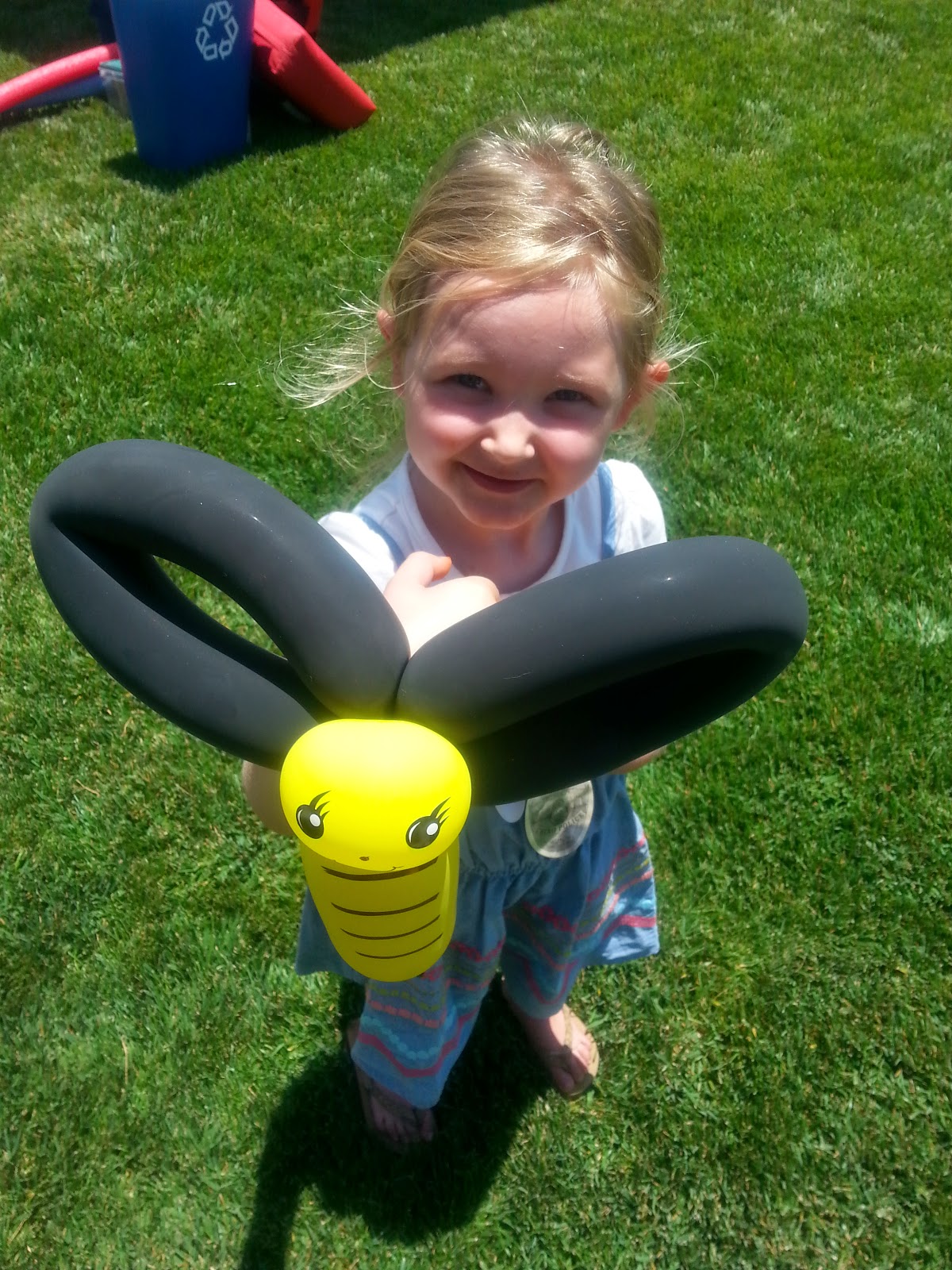 Claire performed in her second dance recital and third stage performance this year (her second one was her appearance as a Froglet in my production of "Honk!" at the middle school). It's crazy to me how comfortable she is with all of this.  She has been going to concerts and productions since she was tiny so I guess it's not a huge jump for her to do this, but it's been really fun to watch her go from having to watch every little move her dance teacher was making in order to perform (and still only knowing a little bit of what she was doing. . . but she was so, so cute!) in December to being able to do some of her routine for me at home and then seeing her with confidence on stage in the Spring was pretty cool.  I could never dance very well so hoping she gets her interest and talent from other areas of the gene pool. 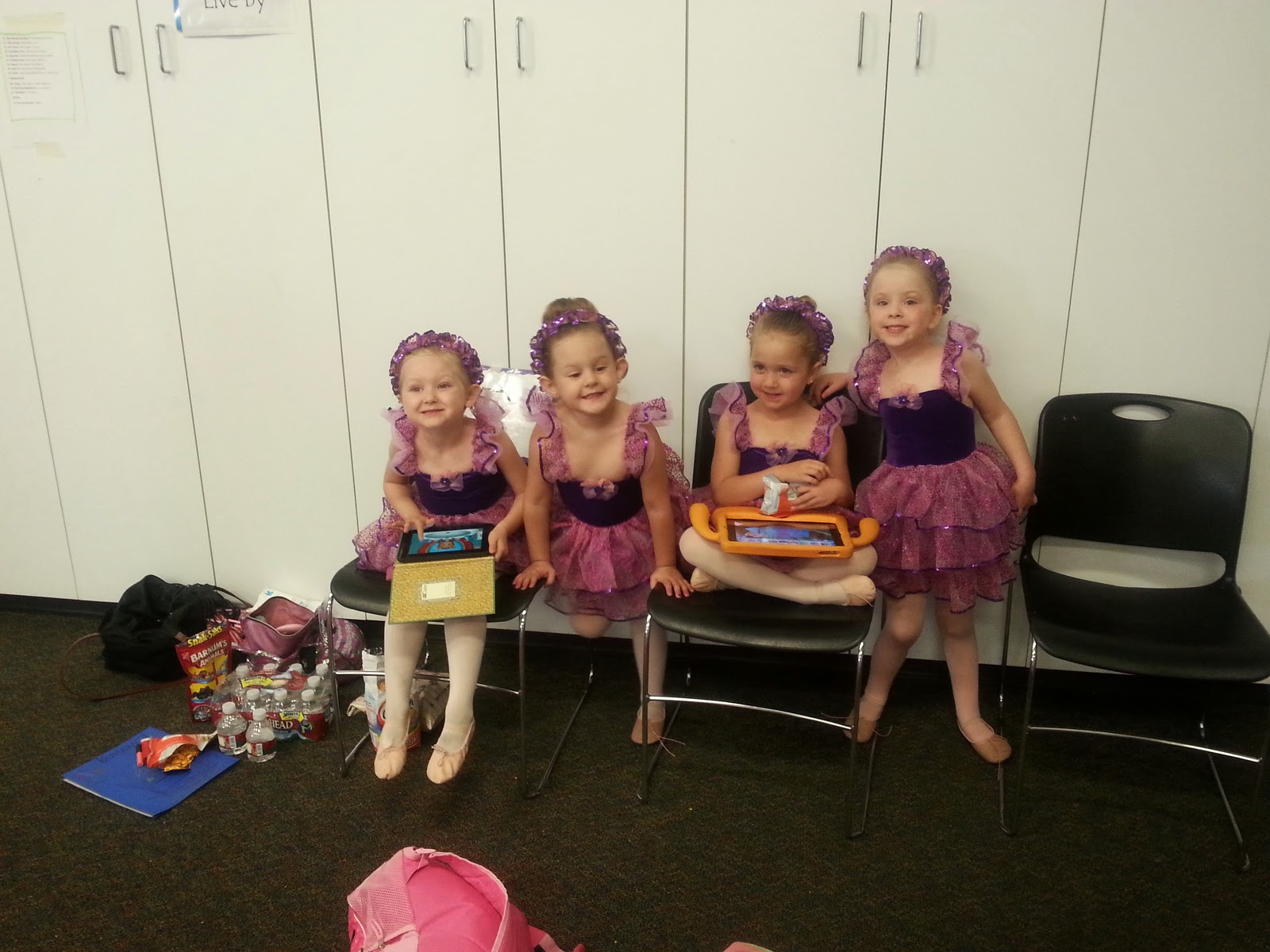 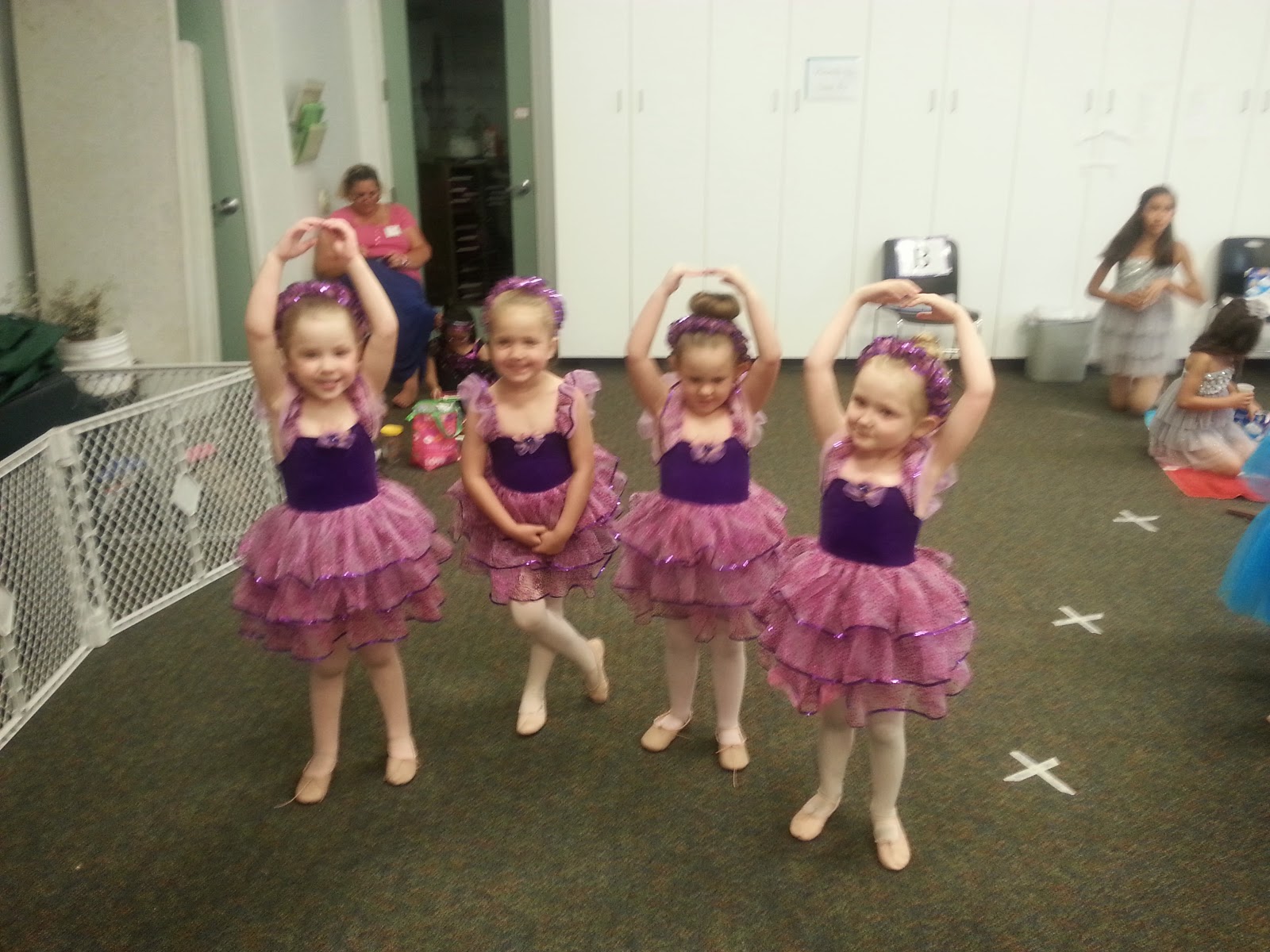 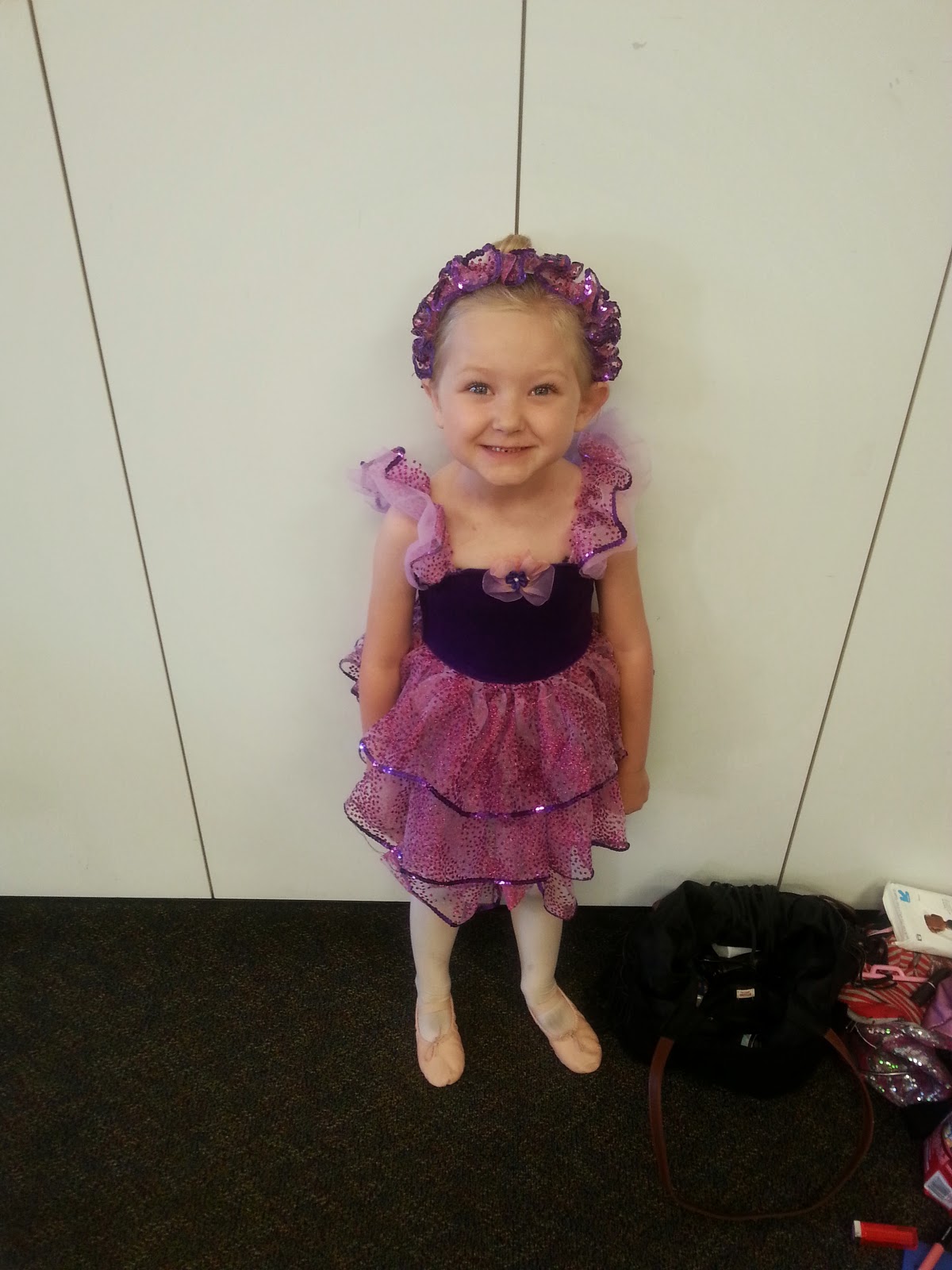 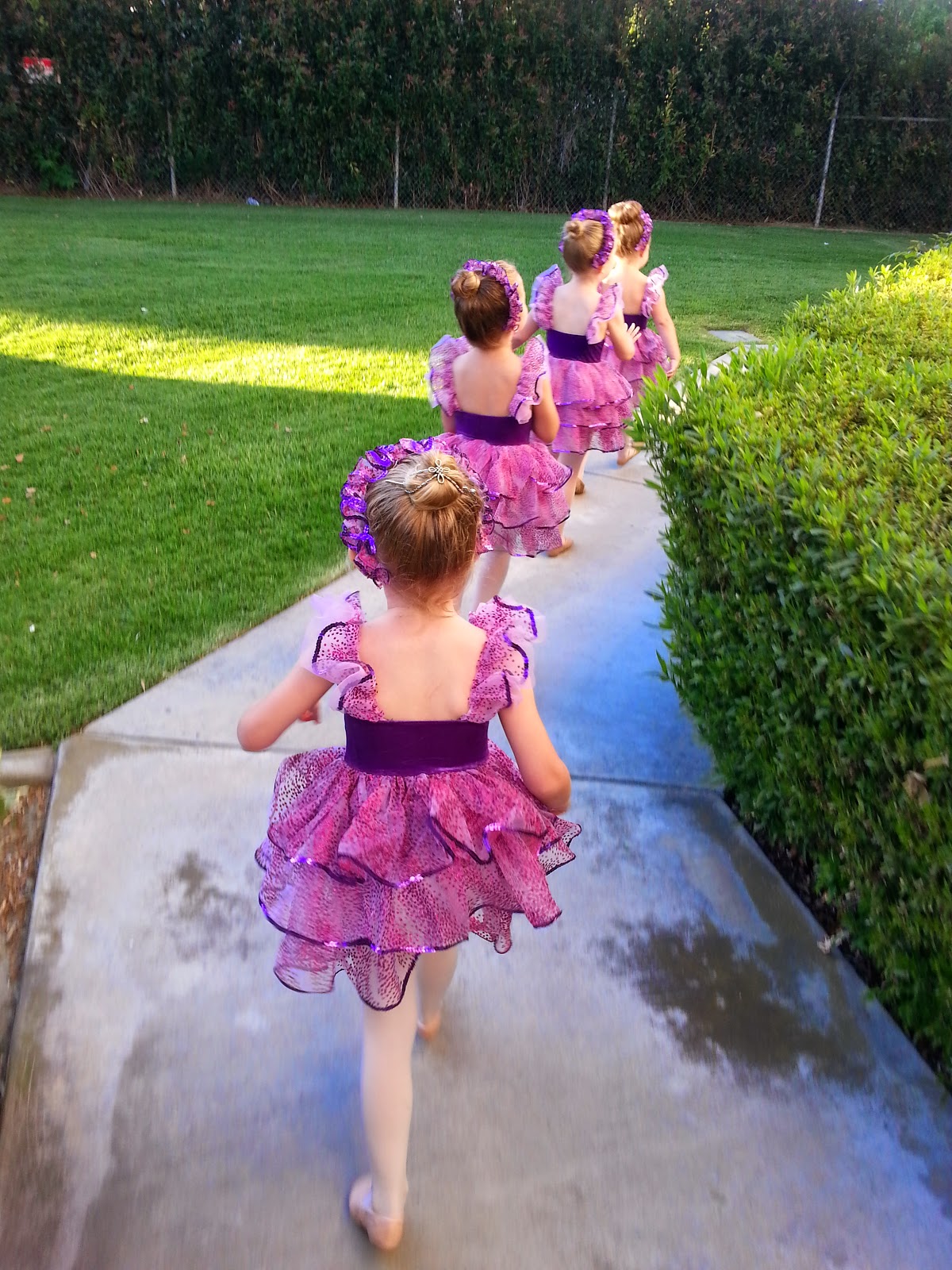 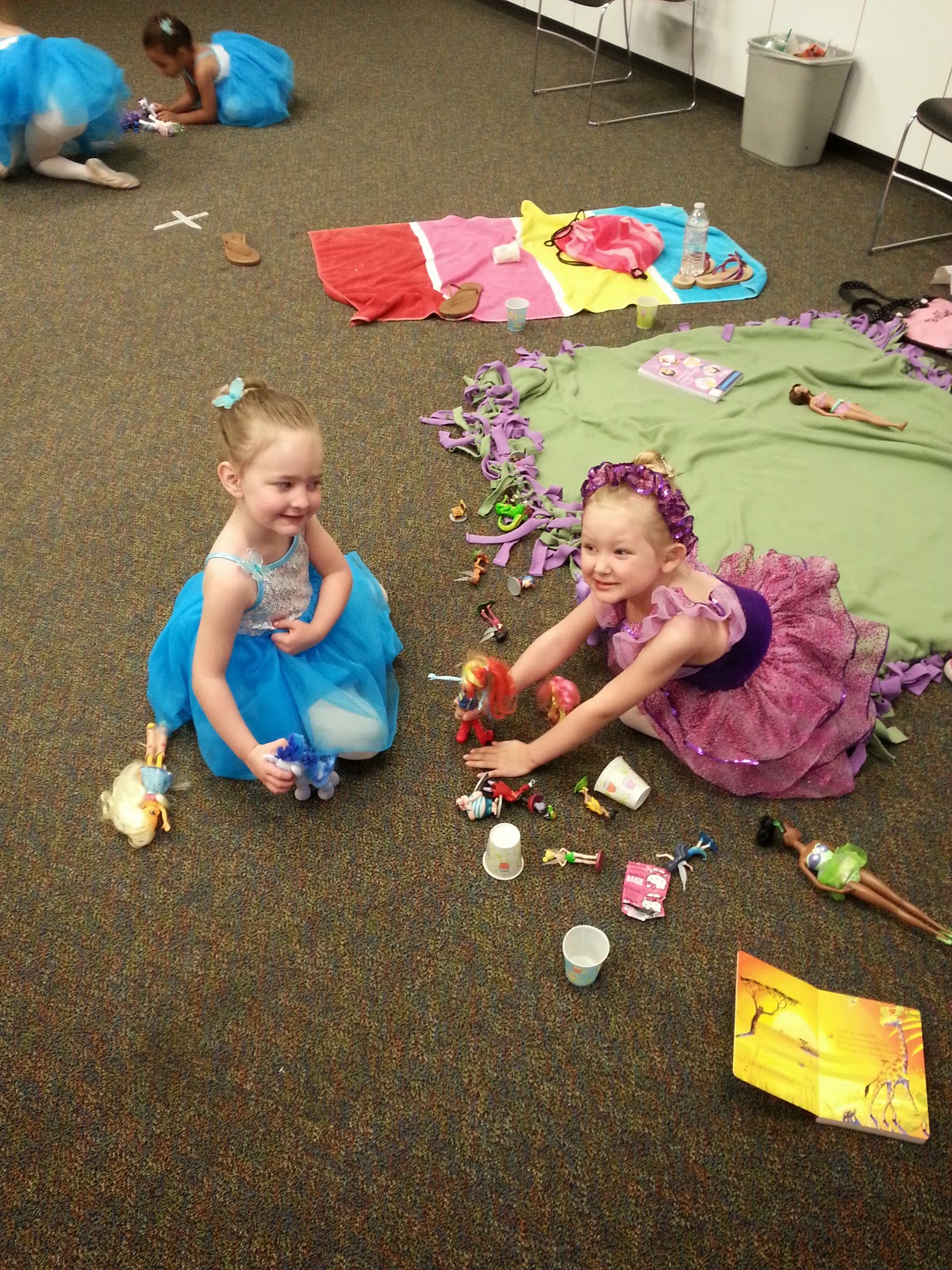 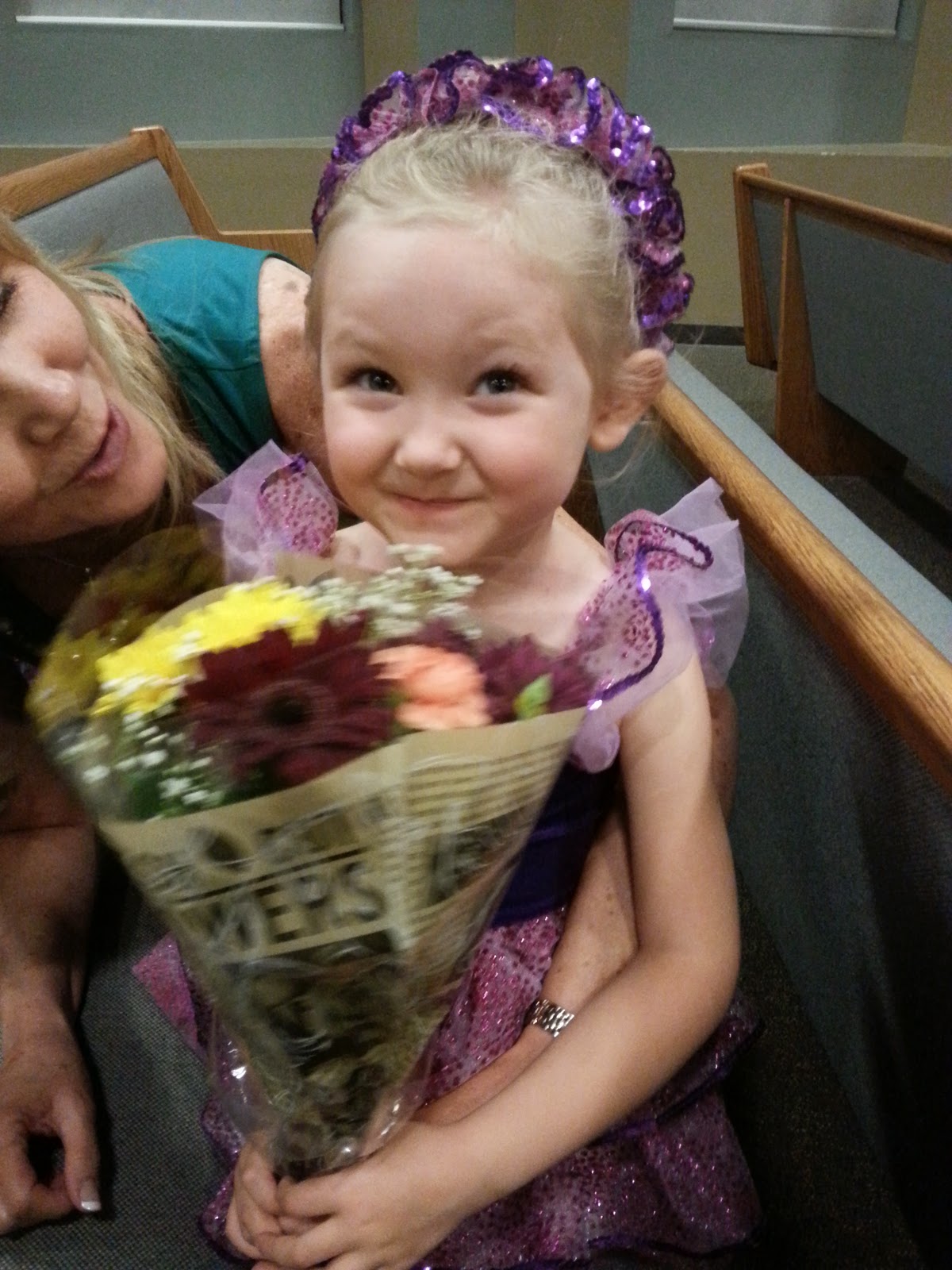 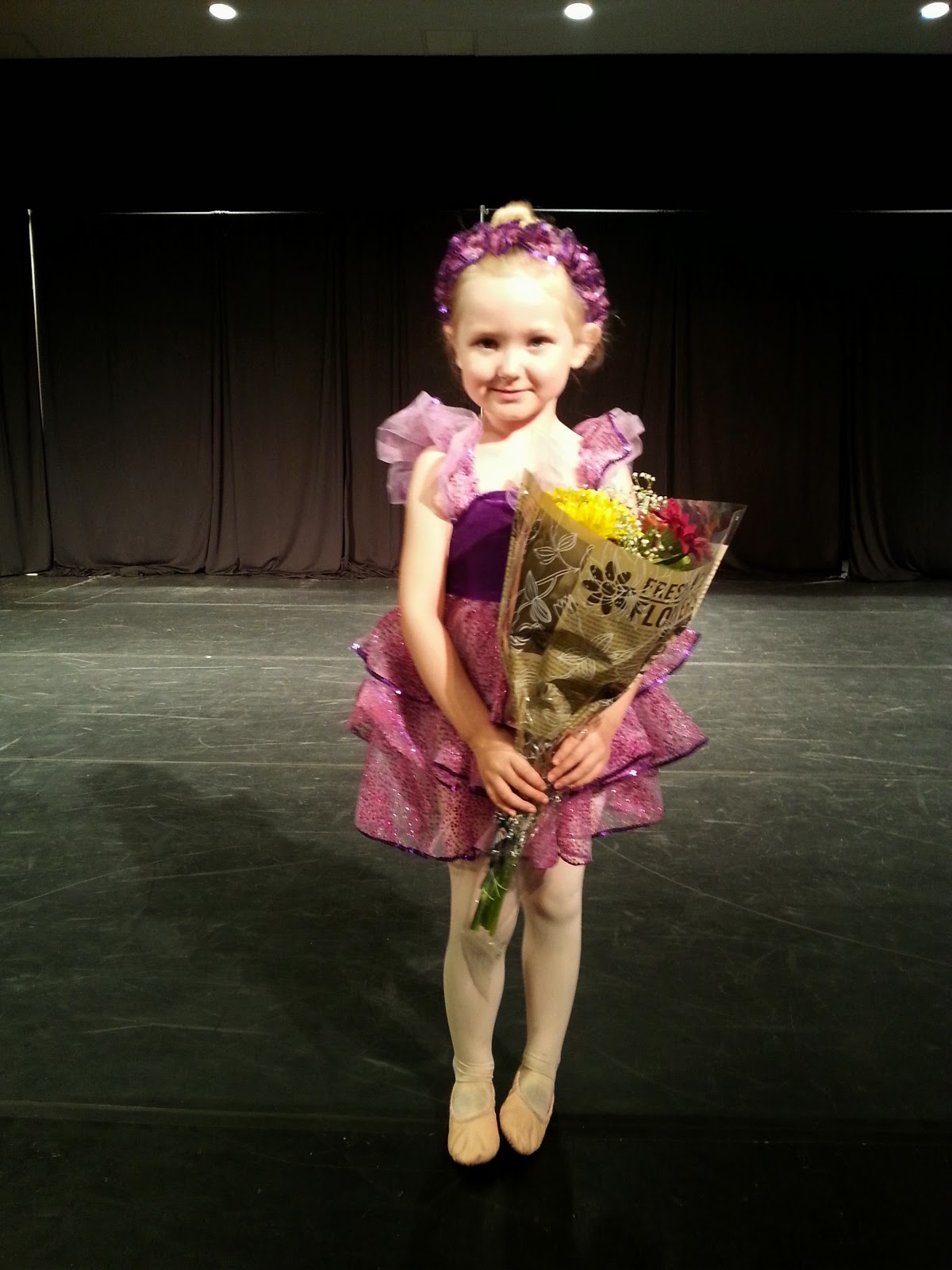 Ashlyn made the big move to Claire's bedroom and her trundle bed, this summer, too.  Having the girls in the same room has gone well for the most part. I am still nursing Ashlyn and, at times, she wakes up and wants to nurse at night.  So getting through that was difficult since now she could, potentially, wake up sister if she cried.  Sometimes Claire sleeps through her night wakings and other times she will awaken and I can hear her on the monitor say, "Ashy, mommy will come in the morning! Go to sleep."  The last couple days, I've been night weaning her, though.  It's been fine.  I go in, I tell her she can nurse when the sun is up and, inevitably, she will get angry.  I bring her out of Claire's room so Claire can sleep and rock her in her old bedroom.  If she is too upset, sometimes I will put her in her crib and let her sleep there.  She's never really been a baby you could rock to sleep like Claire was. Often, when I put her in the crib, she'll curl up and stop crying immediately. It's weird. It's like the crib is still a comforting place for her, even though she is doing so well sleeping with Claire.  But her night wakings are less and less every night and I wouldn't be surprised if in the next few nights she'll be sleeping through the night with sister in her room the whole night.  It has, however, made Claire, who used to sleep until at least 8am every morning an early riser since Ashlyn will wake up and then poke Claire and they are usually up and making noise now at 6:30am (when Ashlyn makes it the whole night in the new room.  Not my favorite. Hopefully, the "newness" of sharing a room will wear off and they will start sleeping in again. But I love that they love sleeping together and that everyone had a roommate for now :-) 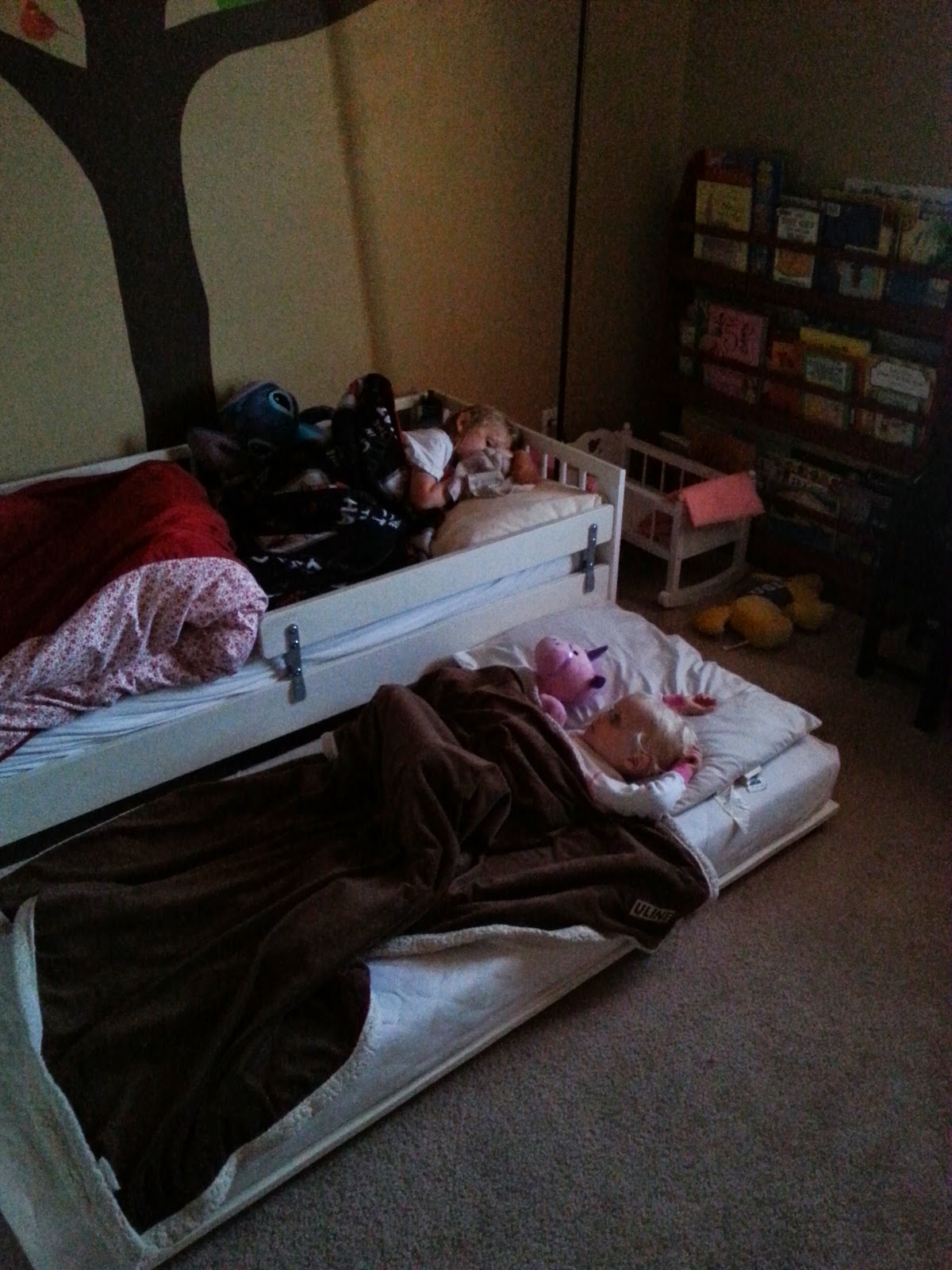 Ashlyn's personality is coming through more and more these days.  She's goofy, sweet wants to kiss and hug EVERYONE and EVERYTHING. Including her peepee when it gets flushed down the toilet.  I kind of wish I was kidding since it's kind of weird but that's just her.  Everything and everyone needs a hug and a kiss and a "I yuh yuuuu!" She's also pretty impish.  She's tiny and genetically I guess the Reed/Johnson genes took full control in that regard, but she's LOUD and seems like she's going to be a little passionate (also a trait of my family. . . both sides) and somewhat mischevious.  If she wants something she'll say "peeese?" and give you this sidways half smile.  You can practically see her batting her eyes. She likes to grab onto counter ledges, bars, really whatever is in front of her and swing (we are considering gymnastic classes).  I thought potty training her was going to be insane and it turned out to be, really, pretty easy.  But I couldn't really tell her "when" to go.  I had her naked from the waist down and told her where the little potty was.  After one accident the first day, she went on the potty every. single. time afterward.  I was floored.  After she did her business, she'd yell, "Yay! I did it!!  I want jamameen (jellybean)!!"  Week two, we put her in underwear.  Same thing, few accidents and then she got that she wasn't wearing diapers anymore. She got brand new "'Punzel" undies as her reward for doing so well, and Lord knows she does NOT want to peepee on 'Punzel.
The 4th of July started with me having Christian plant a couple tomatoes in our garden.  Late?  Yes. Better late than never.  Of course!  Unfortunately, two of the tomato plants (same kind) didn't make it but our Beef Steak tomato plant is doing fantastic and we've already gotten some great tomatoes from that plant. 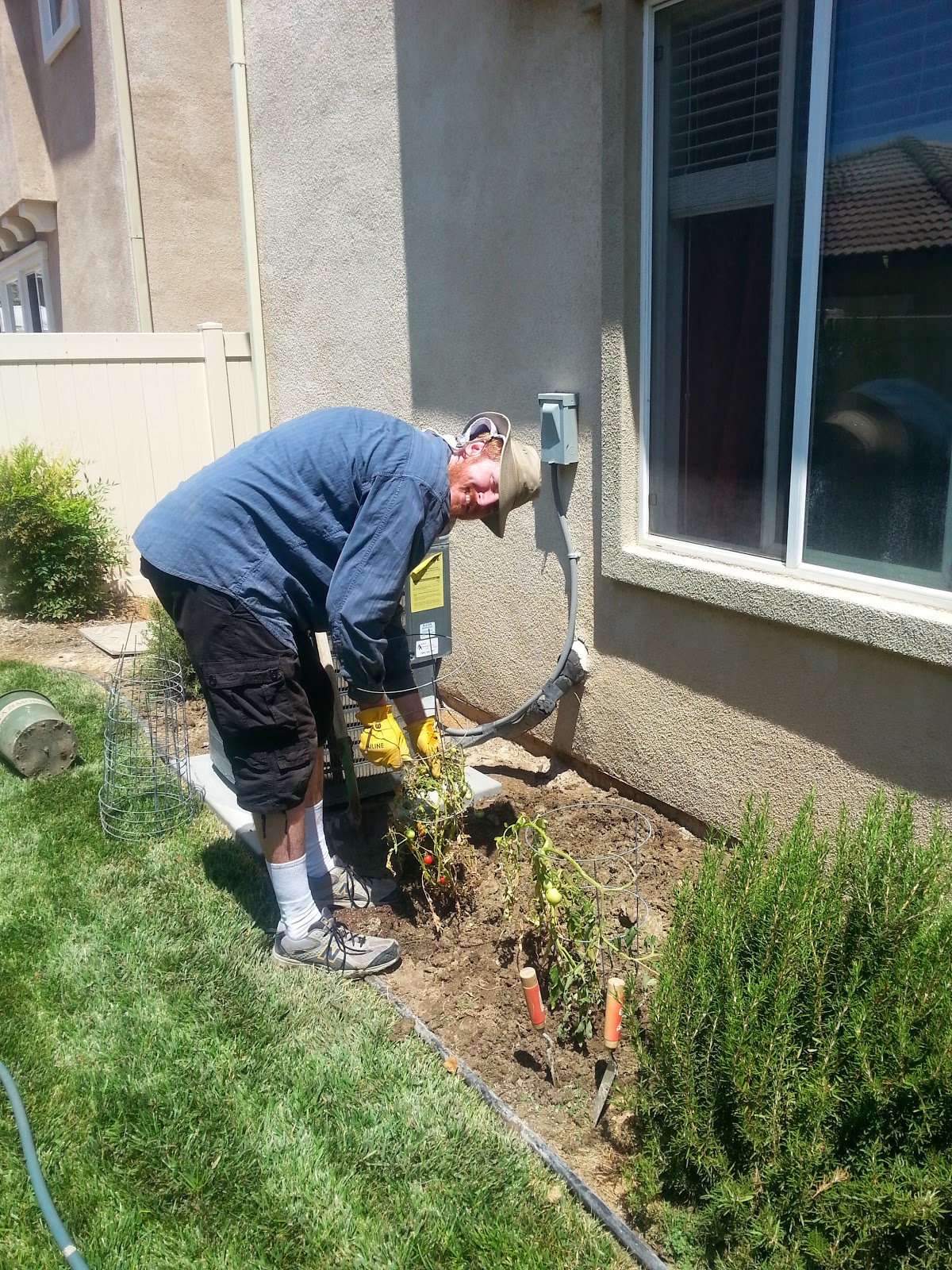 Our evening consisted of our church's barbeque in the afternoon and then a walk down to the city's fireworks show.  The fireworks show seemed to have a little trouble (started 30 min late, couple issues with the fireworks themselves) but for the most part it was a good show and it was nice to have a meal with church family and talk to people I normally don't. 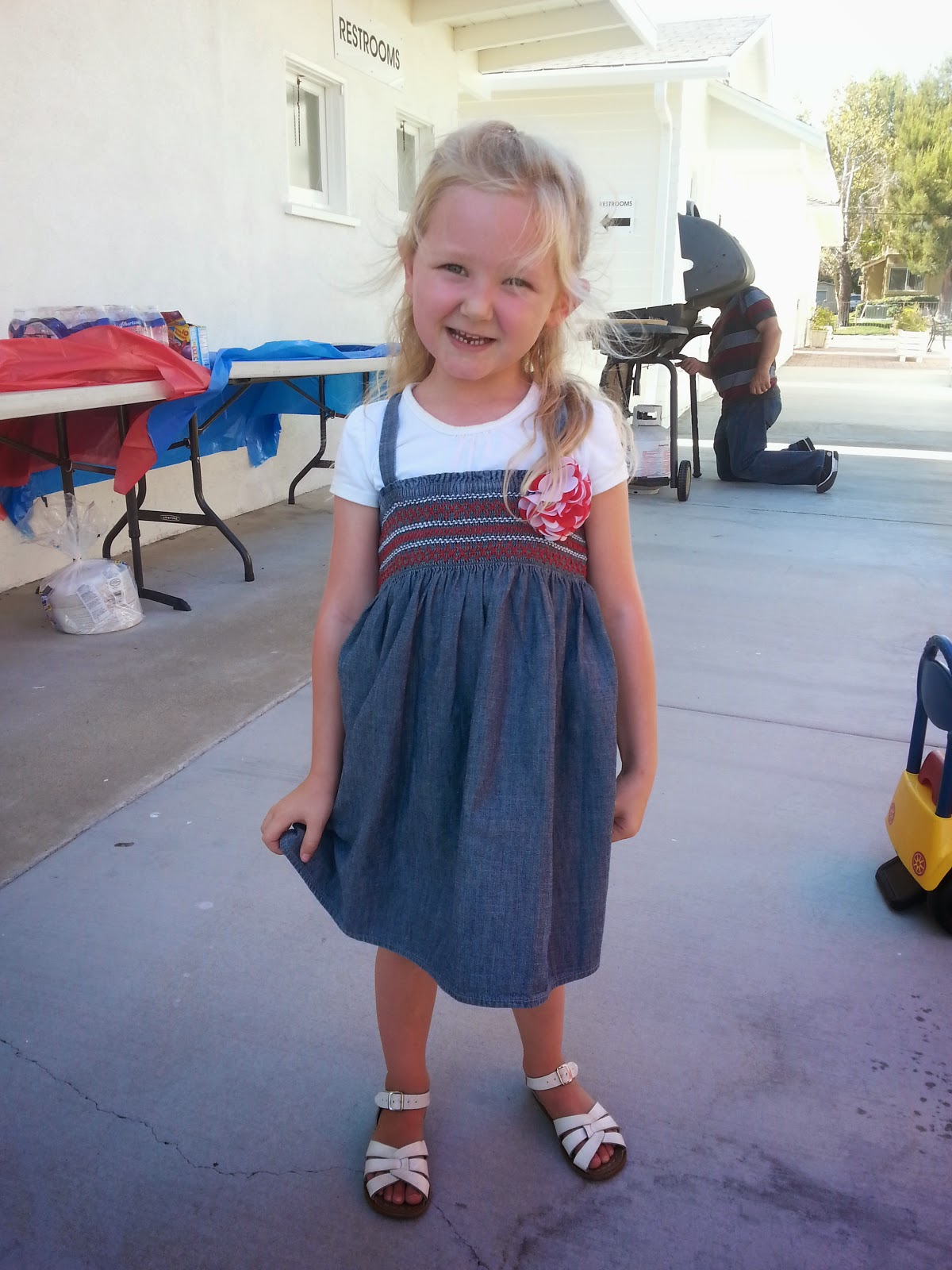 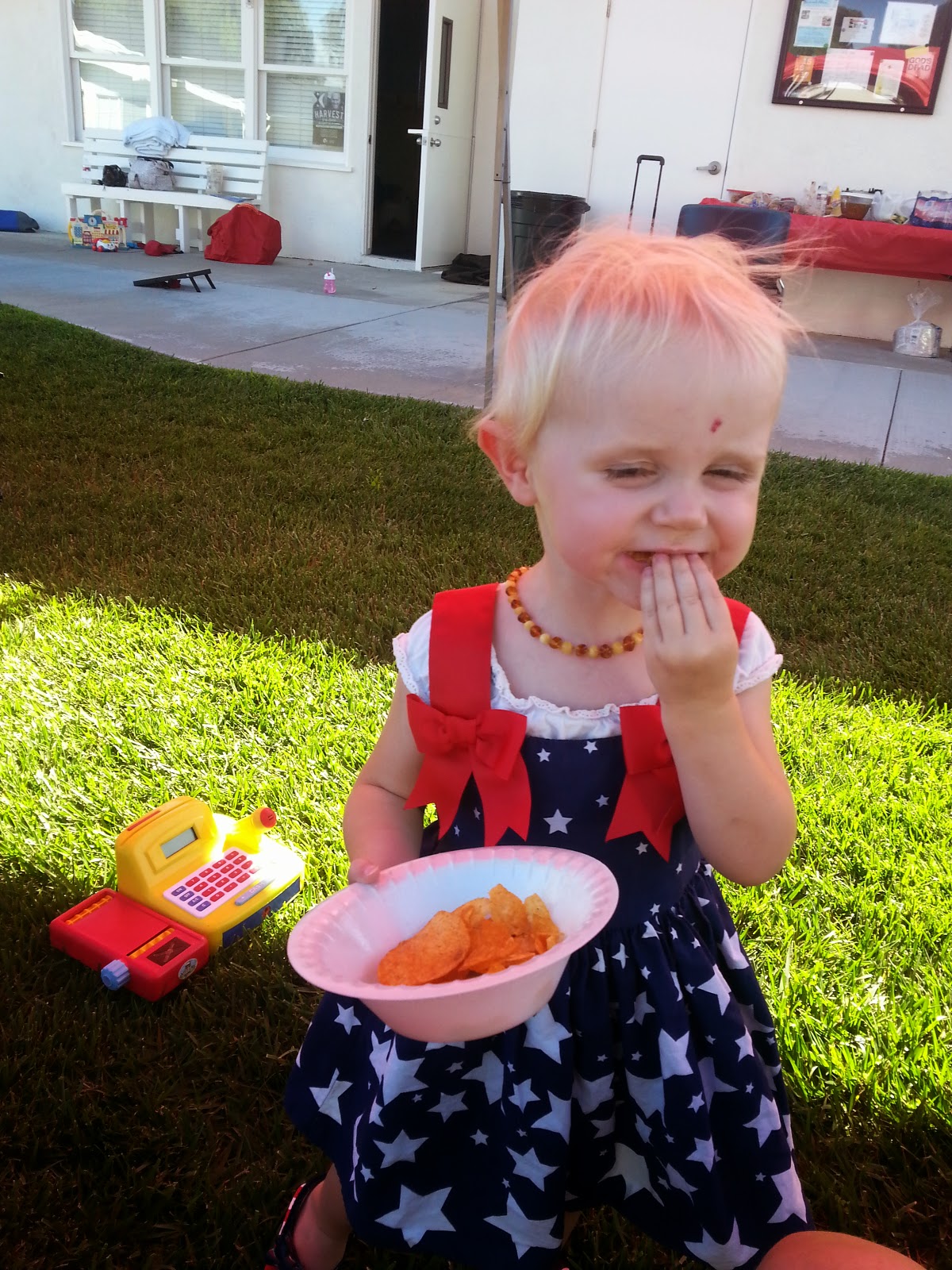 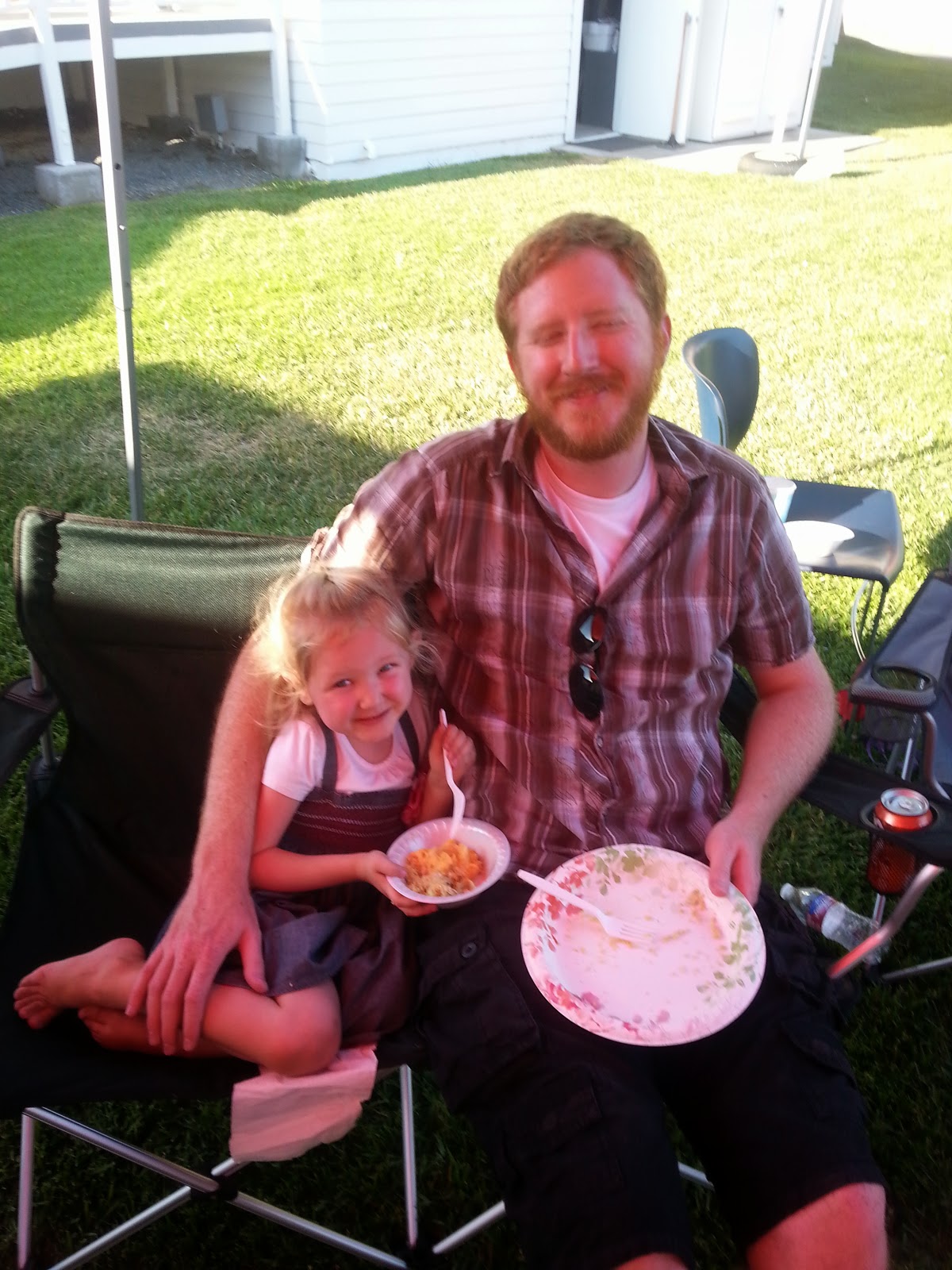 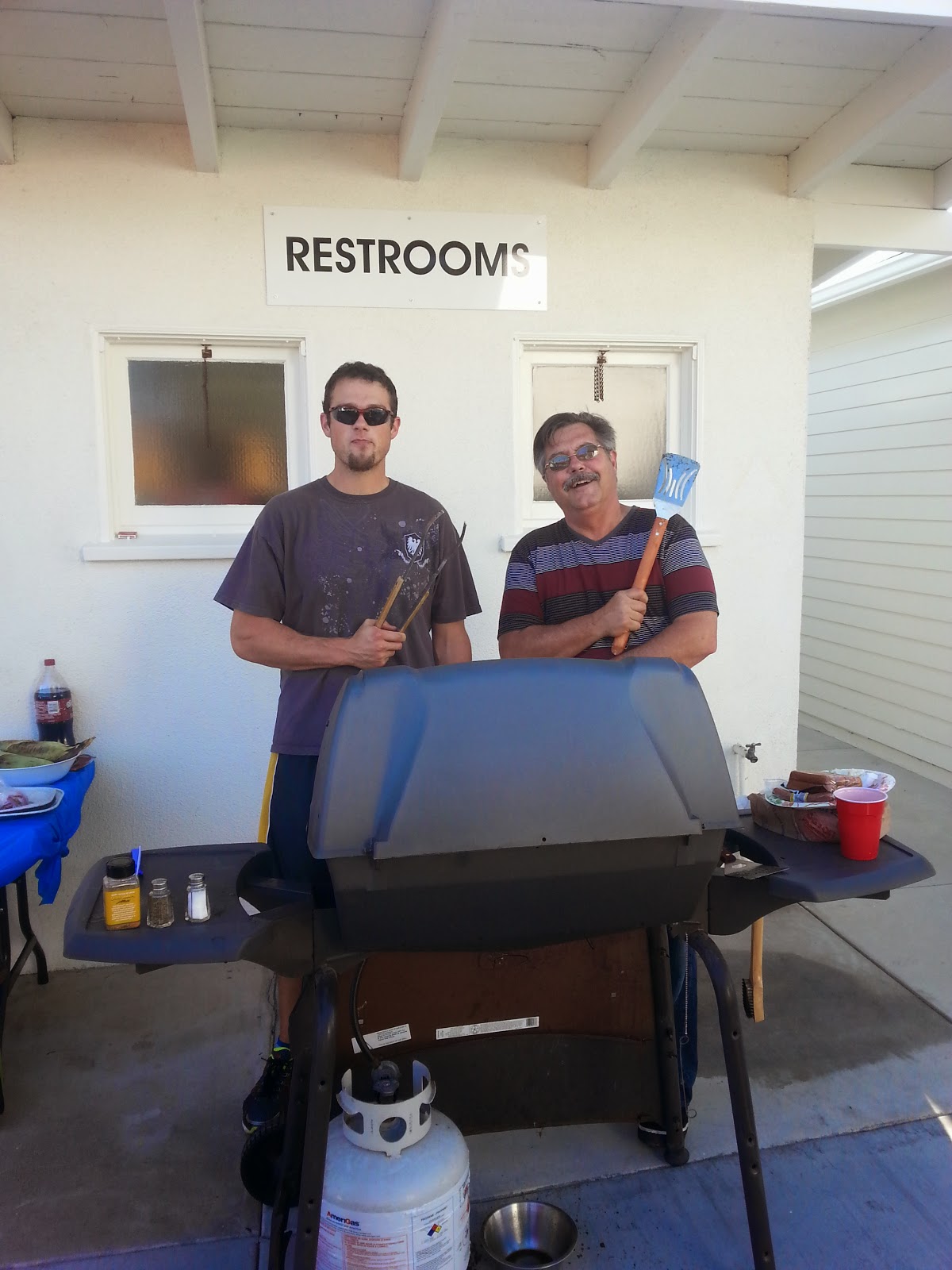 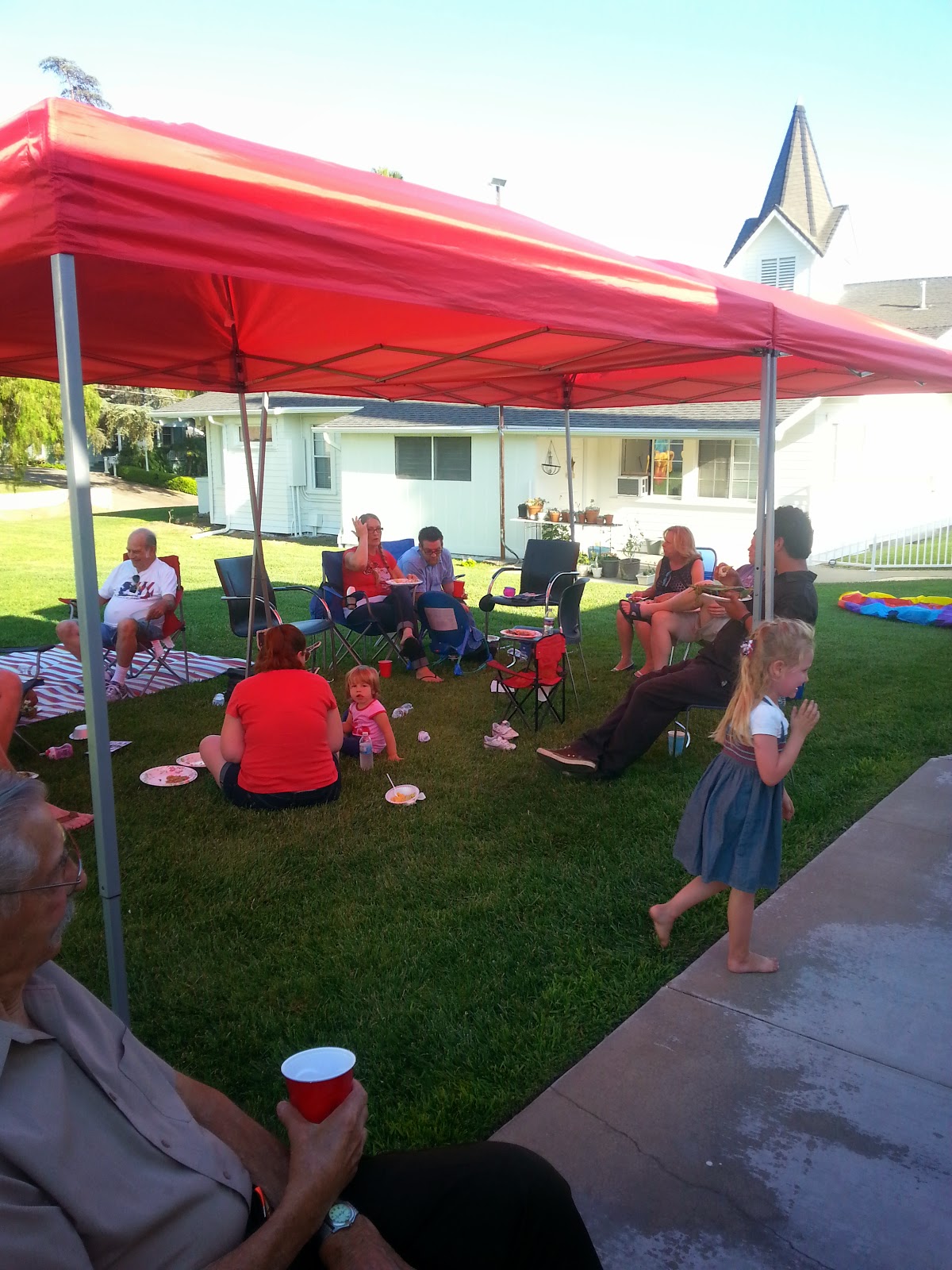 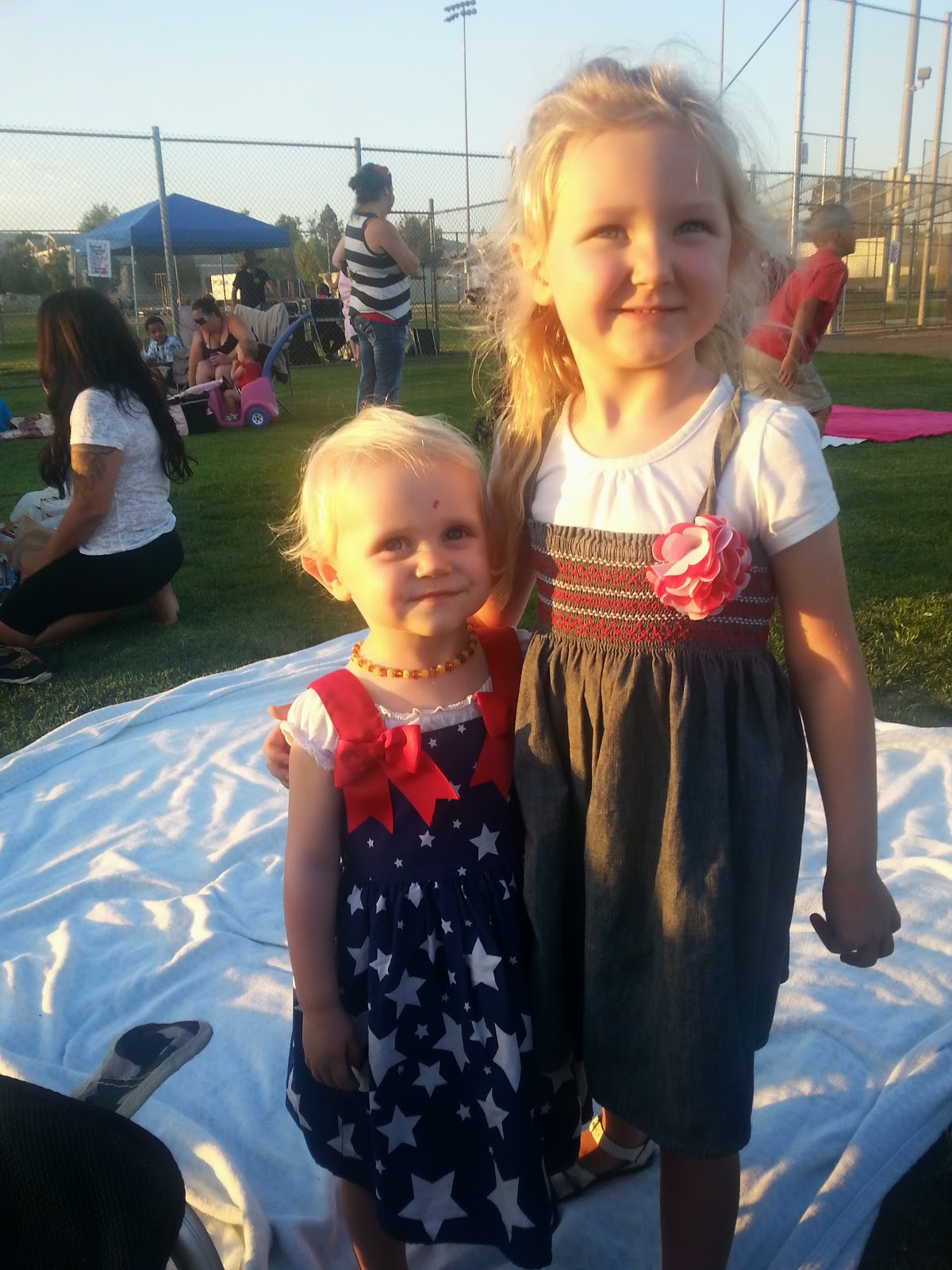 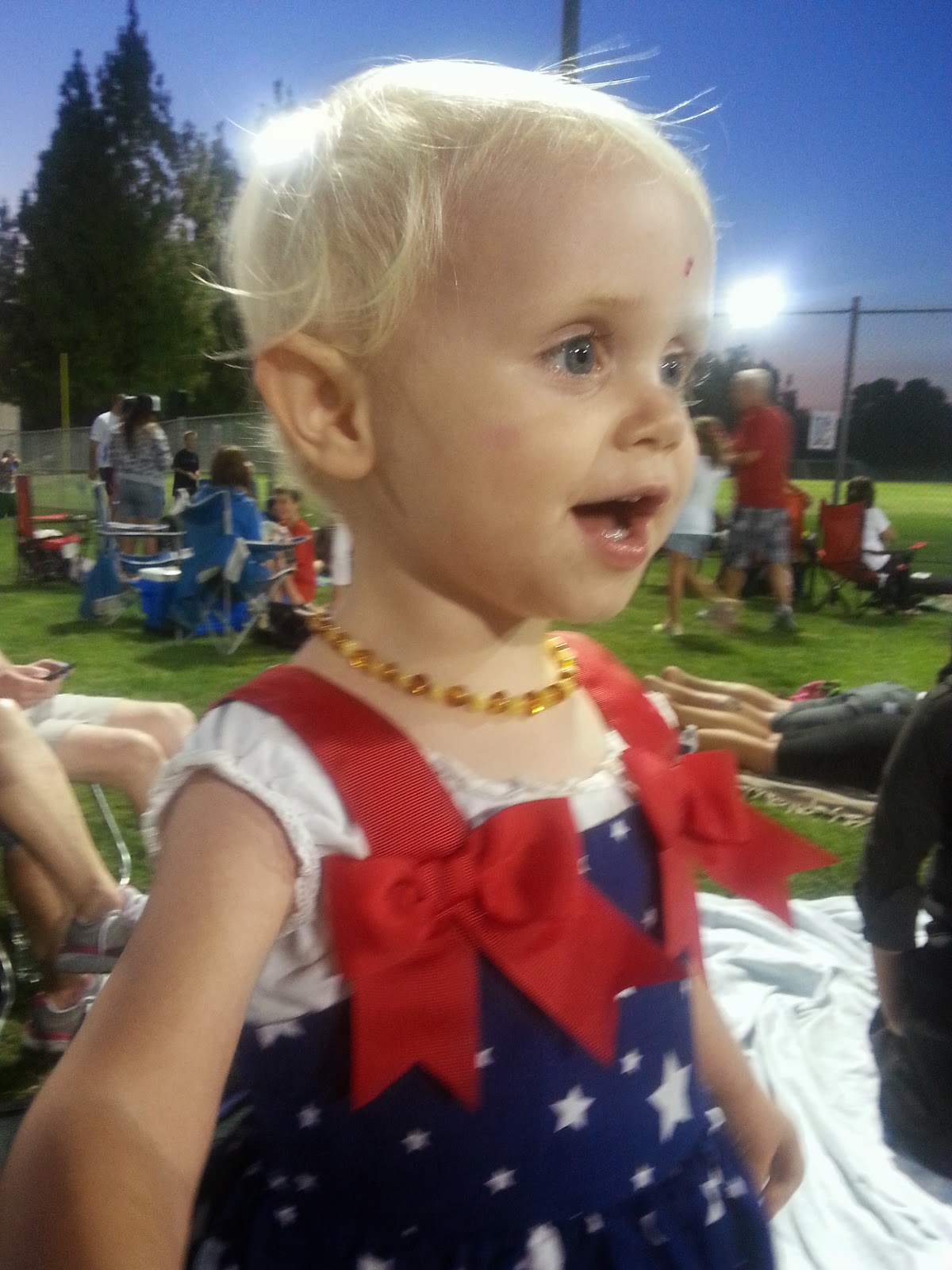 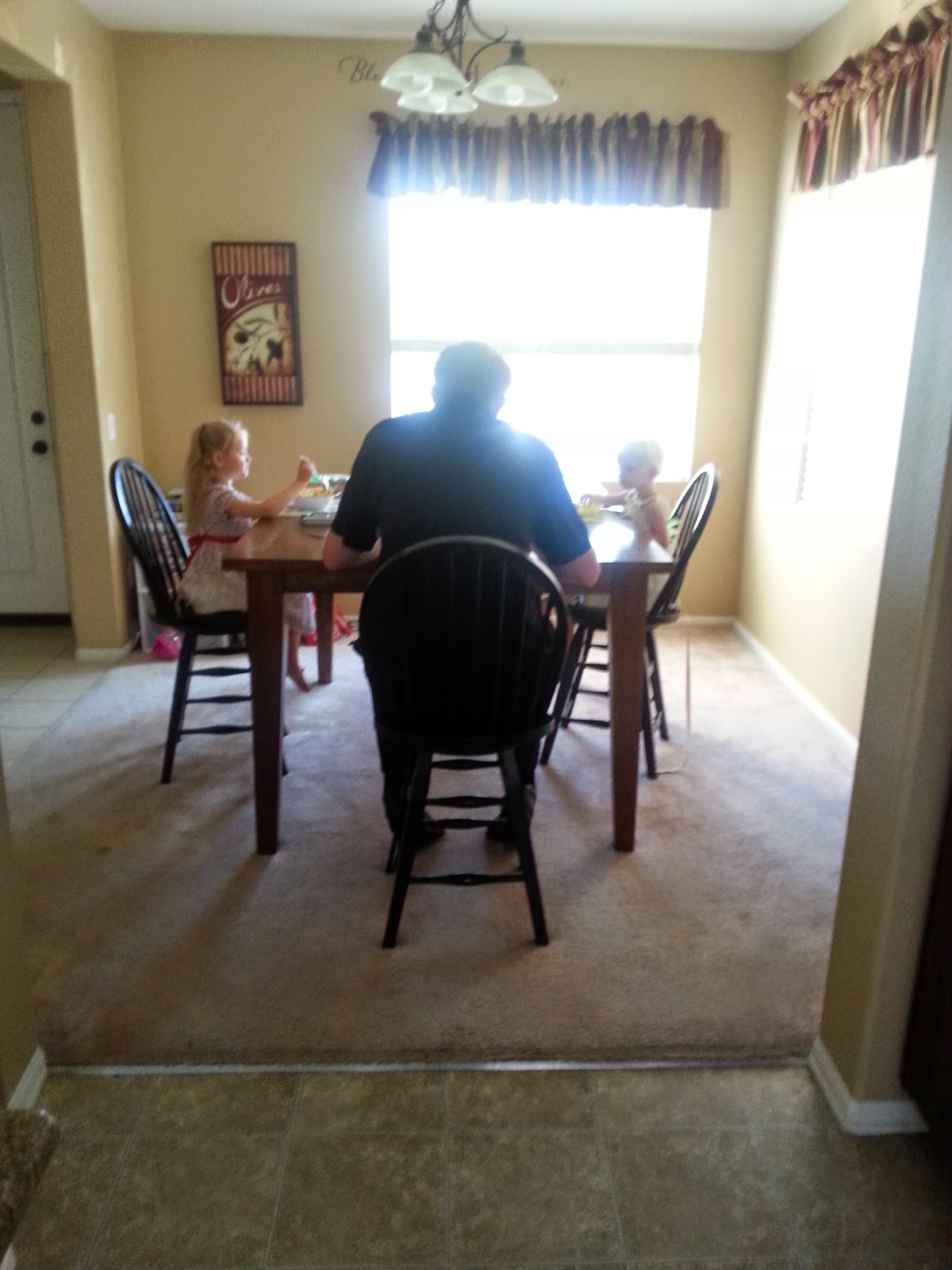