Back in the Saddle Again: Our first homeschool week of 2014

I decided to start Claire's homeschool the week after Christmas week.  So we started on the 30th and went through the 3rd.  It was so much fun to get back into it.  Reminded me to how much we had over the summer with Before Five in a Row.  She loved the story of Hannah and Samuel and really seemed to "get it."  She really enjoyed the fingerplay for this unit, too. So, we are off and running for 2014.
The first story was about Hannah praying for a little baby.  The book said to show the child pictures of themselves when they were babies, hitting various milestones.  It was crazy to flip through the pictures.  It's forced me to really look at how much she's changed.  It was neat and hard all at the same time.  I miss my chubby cheeked Cabbage Patch baby but love my smart, serious, fun little girl, too.
For our counting activity, she drew babies faces in boxes and we counted the boxes.  I introduced counting by 2s a bit but it was the first time and she didn't totally get that.  We'll revisit that, for sure. 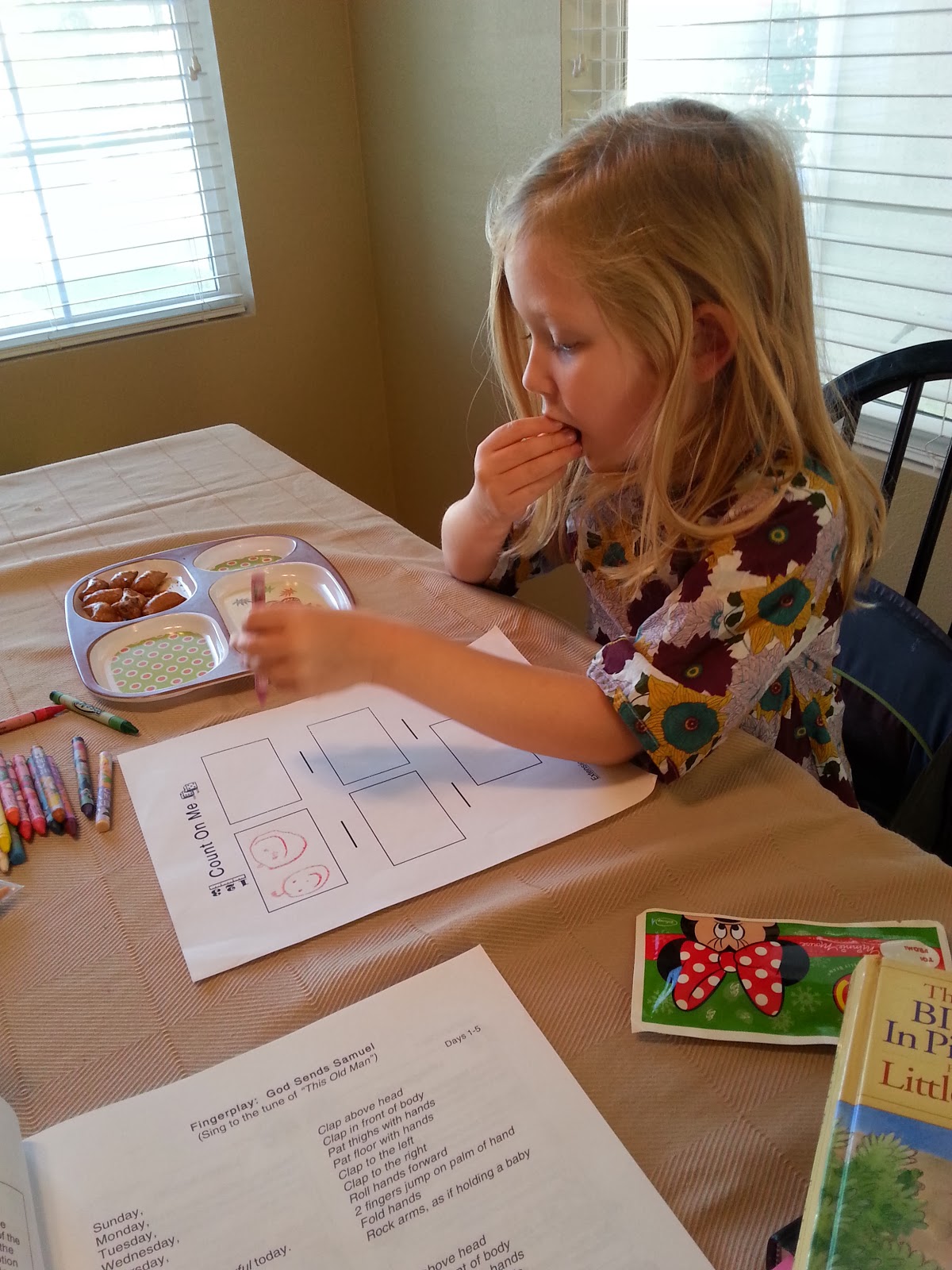 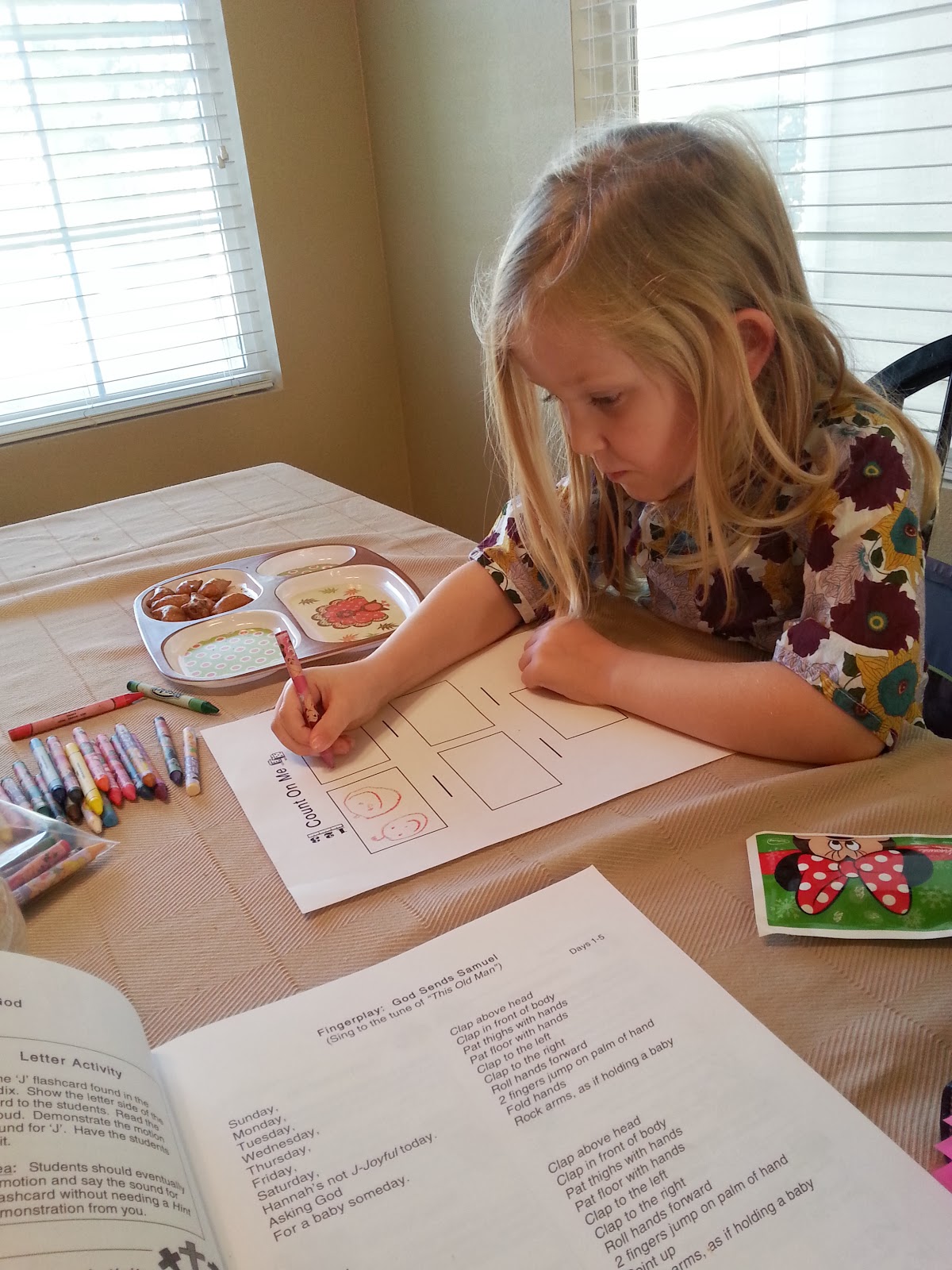 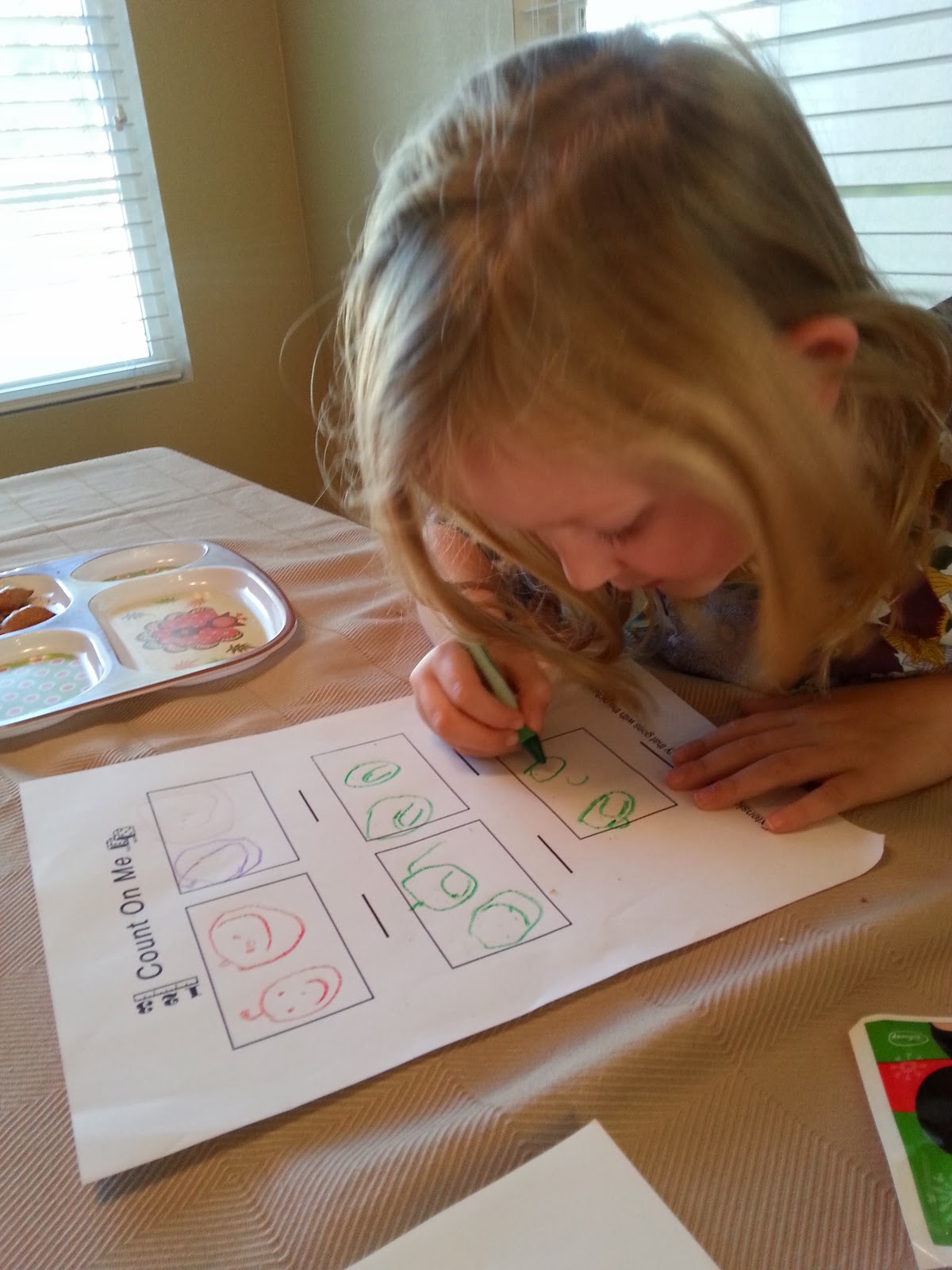 I added a little counting activity from Claire's High Five Magazine.  There was an activity in there with snowmen and the idea is to point to the snowman with the "most buttons" or the "least buttons" or the "same amount of stripes" on his scarf or whatever.  This was a good add on.  I'm so glad I decided to get the magazine for her (got it discounted through the school's magazine drive).  She's been loving it. 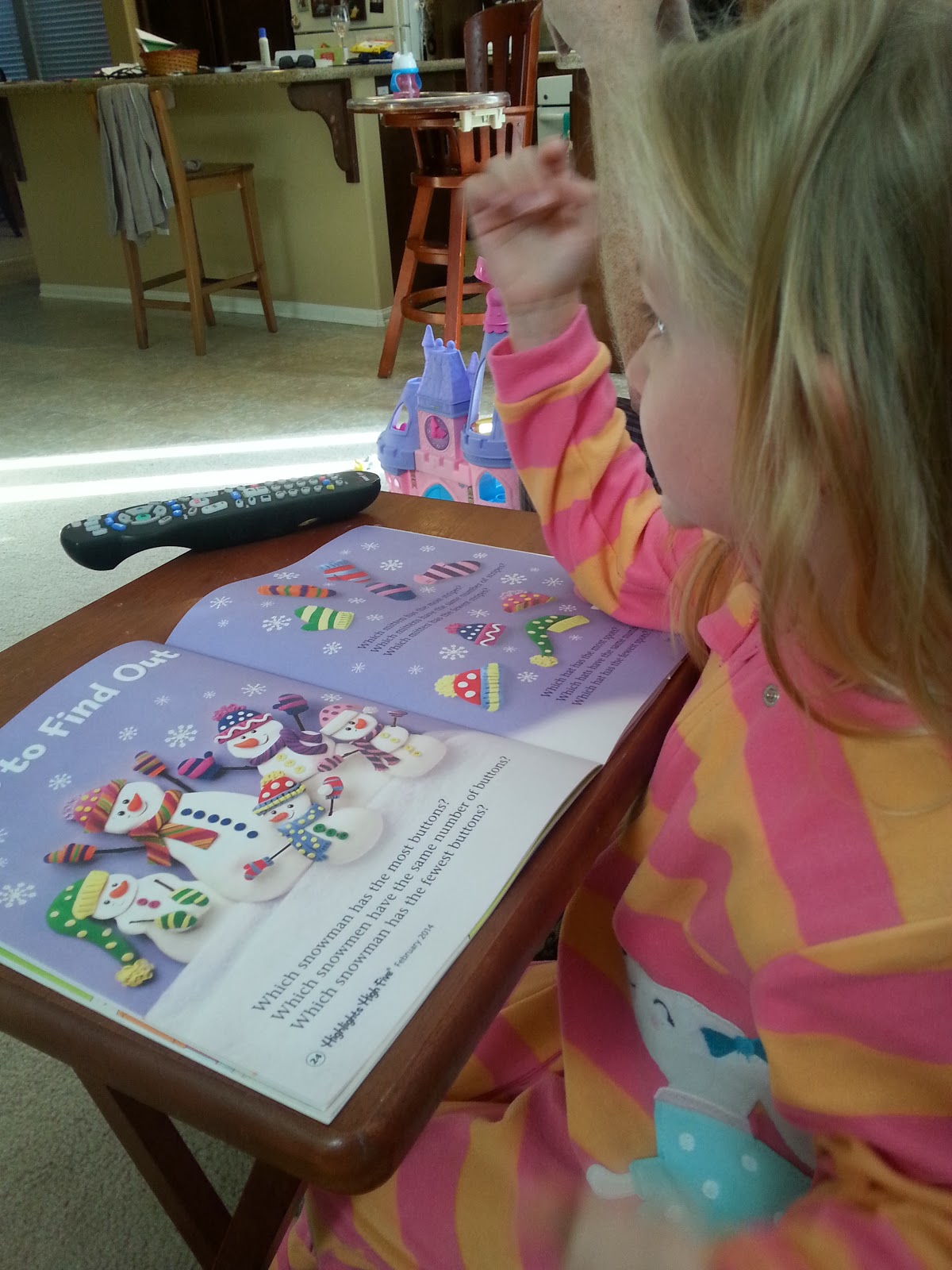 The letter of the week this week was "J"  We made upper and lowercase "Js" out of  her new playdough she got in her stocking.  We talked about what sound the "J" makes and named some words that started with "J" my favorites from her list: "Joyful," "Jesus" and "Joshua" :-) 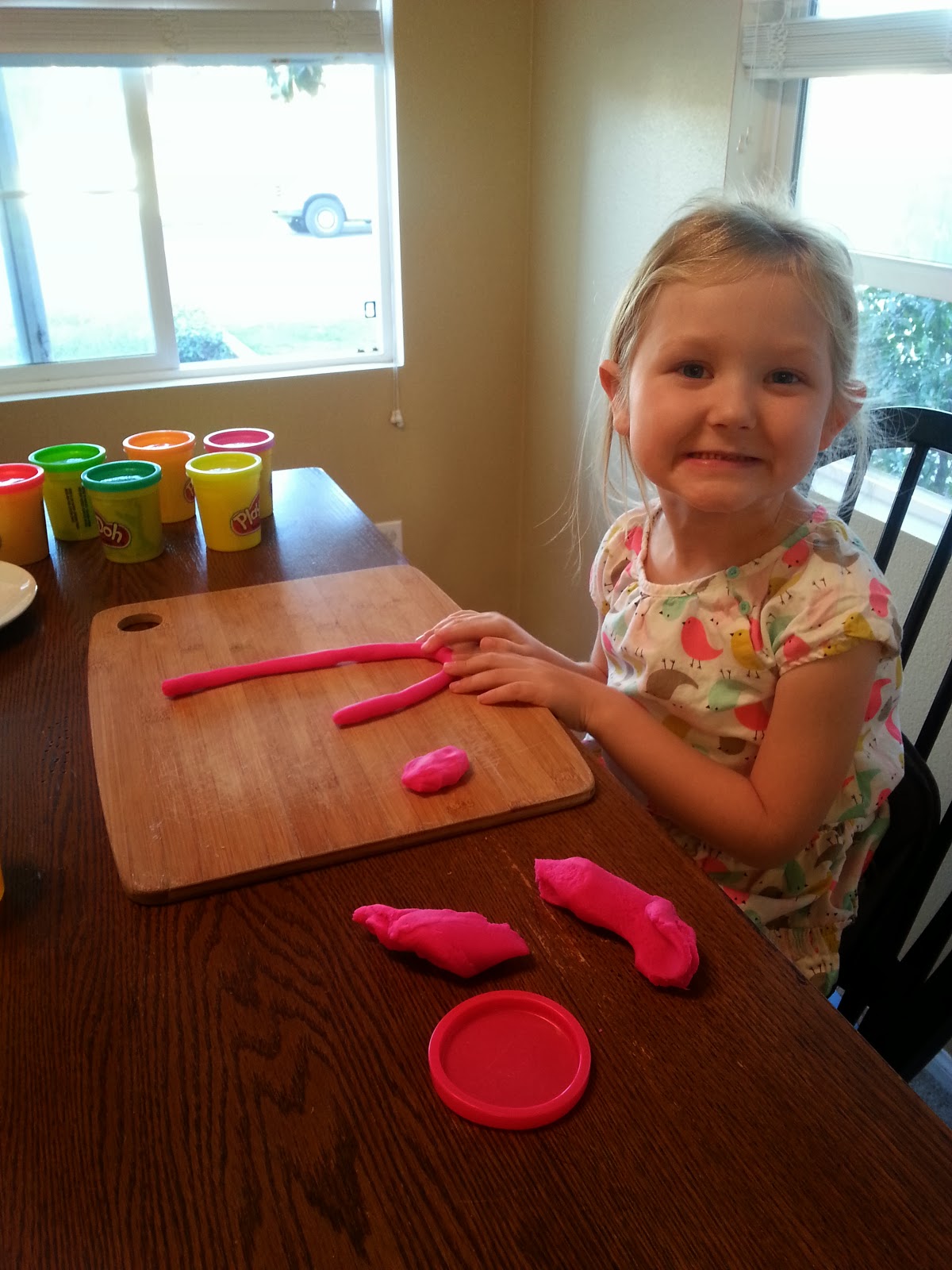 This, of course, let to Claire wanting to make more letters with her playdough and eventually, her wanting to just play with the playdough, which was fine with me. 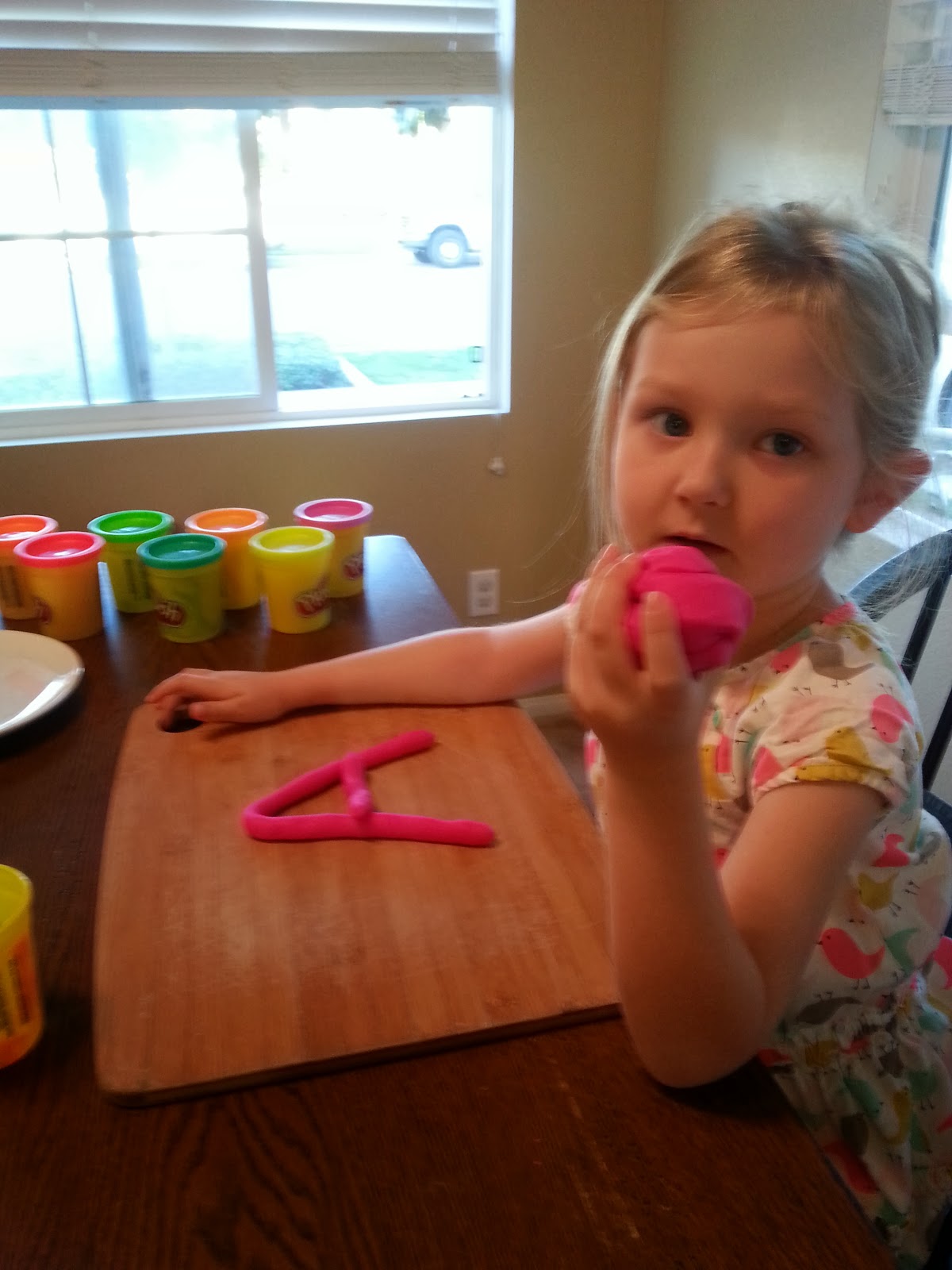 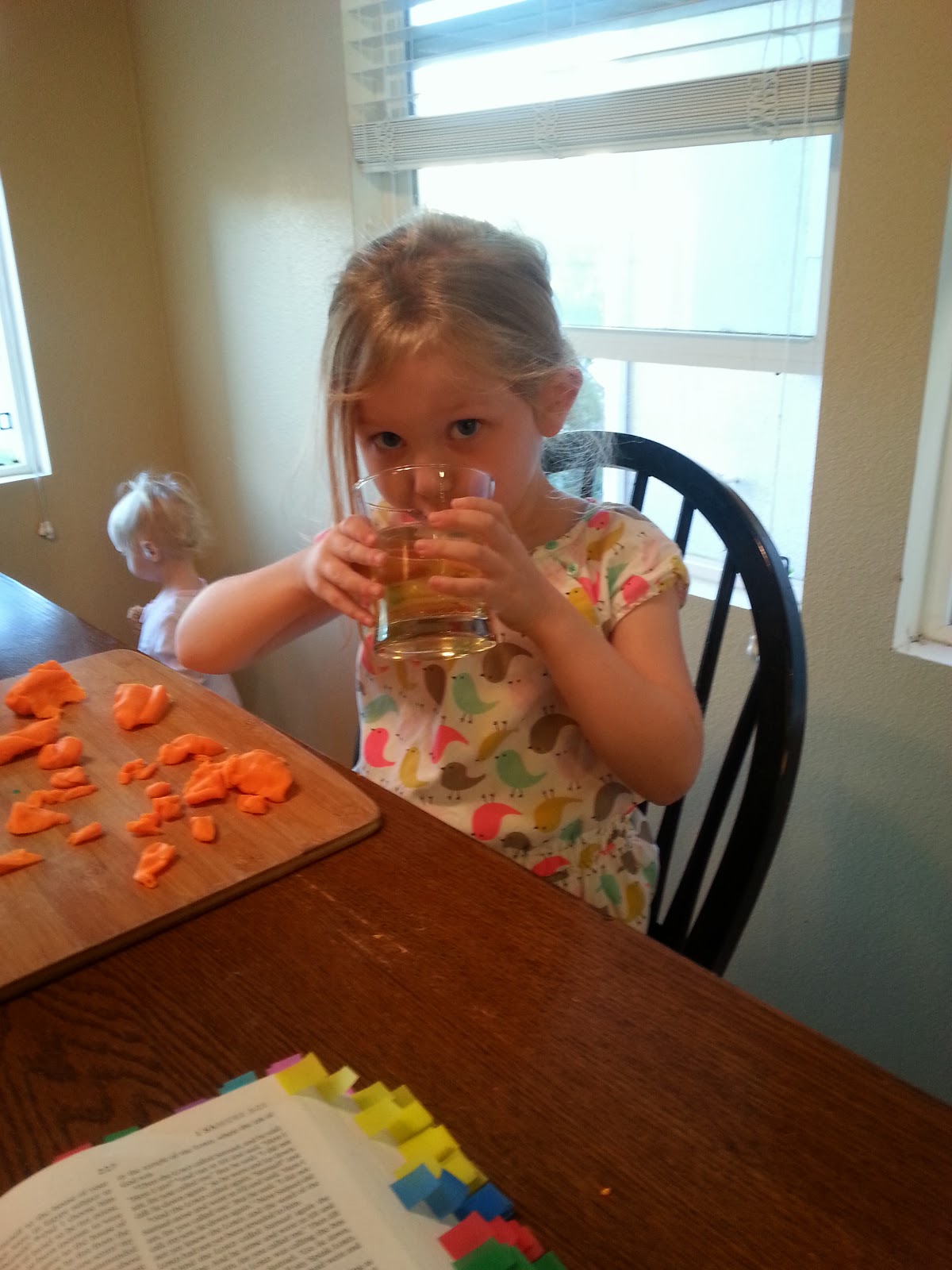 Now, Claire has discovered "Martininellis" since New Years.  We have one bottle left and she has been asking more more "sparking juice" ever since we gave her a taste.  She doesn't, normally, drink anything but water or milk and VERY rarely juice when we go out (although, she will ask for it at random time, I think, to test whether we'll give it to her, periodically.)  So this was a big, big treat for her and she loved it.  Well, I agreed to giving her a glass since she was doing so well at her school work and having such a positive attitude.  She was a very happy girl.  And she worked on her "J Hide and Seek" page like a pro. 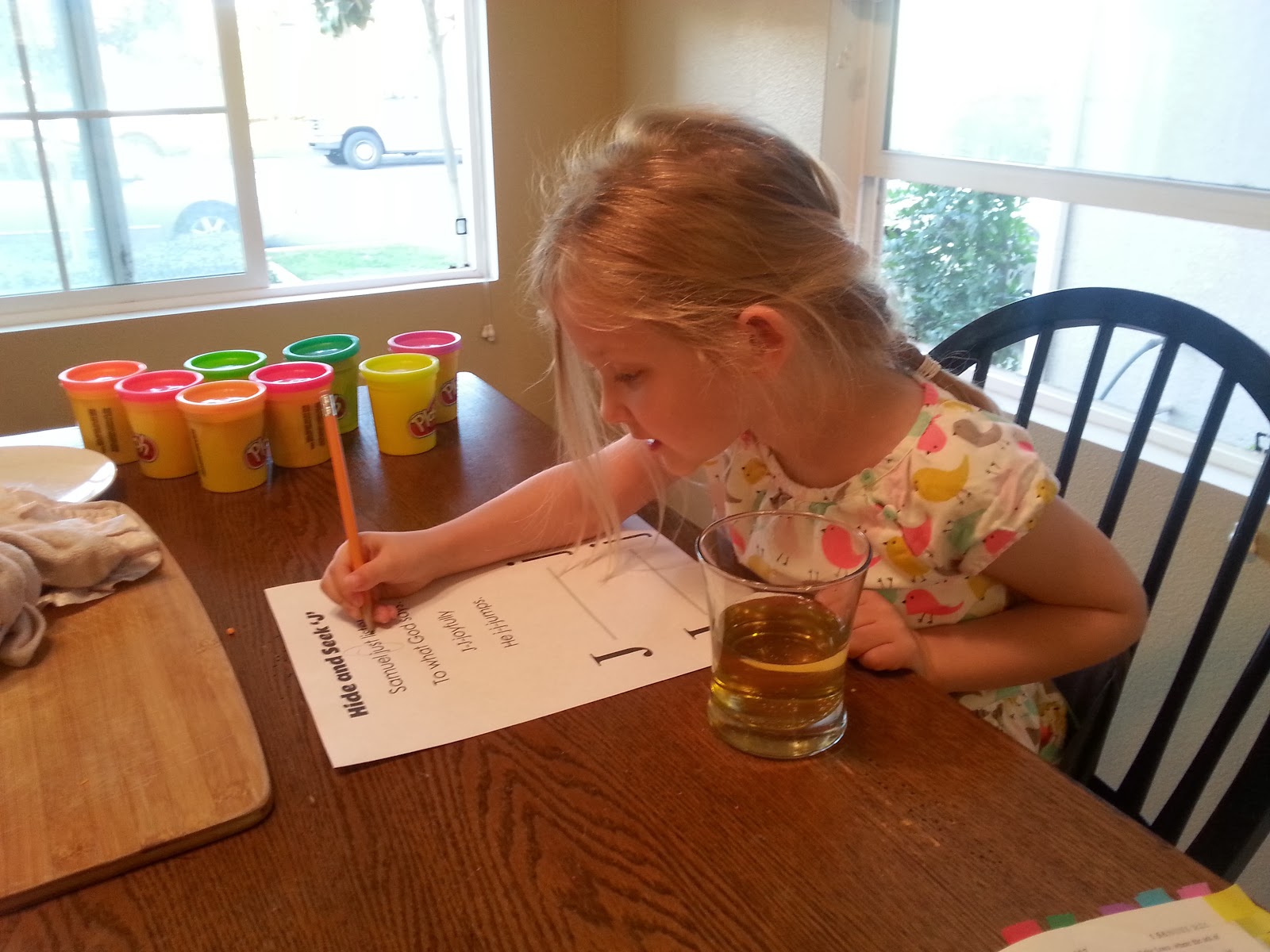 There were a few "acting it out" activities we did that I couldn't capture with my camera, mainly because I was acting them out with her!  But we pretended to be Hannah bringing Samuel to Eli to give him to the Lord and we stomped and clapped out rhythms to demonstrate that Samuel listened carefully to the Lord and did what He asked him to do!
On day 4 we played a little game called "Capture the Ark" to tell the story of the Ark of the Covenant being captured by the Philistines and what that meant to the people of God.  The idea is to take an object that is to represent the ark and put it under one of 2 or 3 cups.  Move the cups around and the child identifies which cup the "ark" is under.  At first, we tried to take a ball of yellow play dough and make that work, but it didn't roll like it should and so we switched it out for the playdough container.  It worked much better.  Interesting activity.  Sometimes she followed the cup well and others she didn't track so much and picked the wrong cup.  So we'll revisit this, for sure.  Probably and easy game I can pair with lots of different lessons! 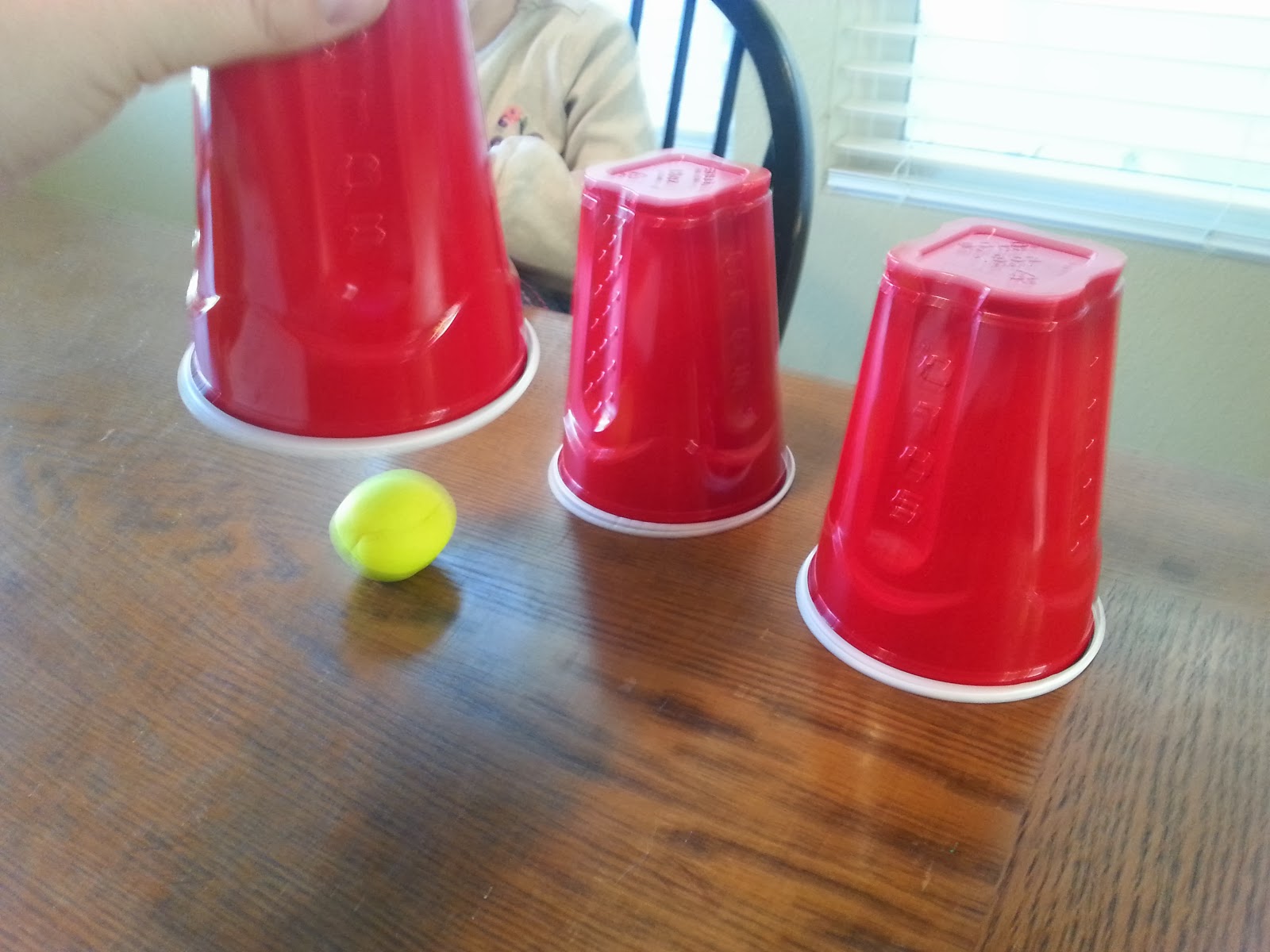 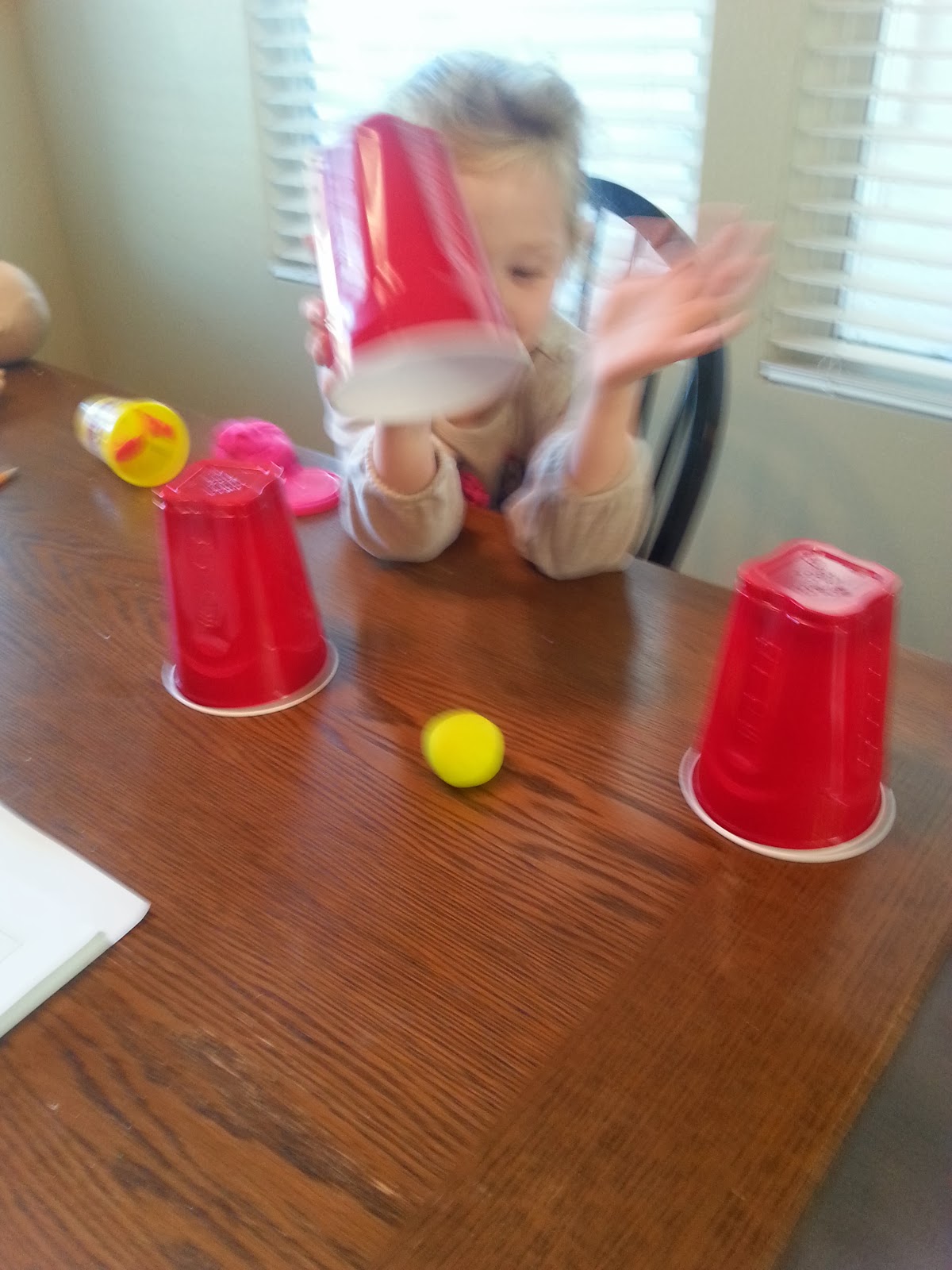 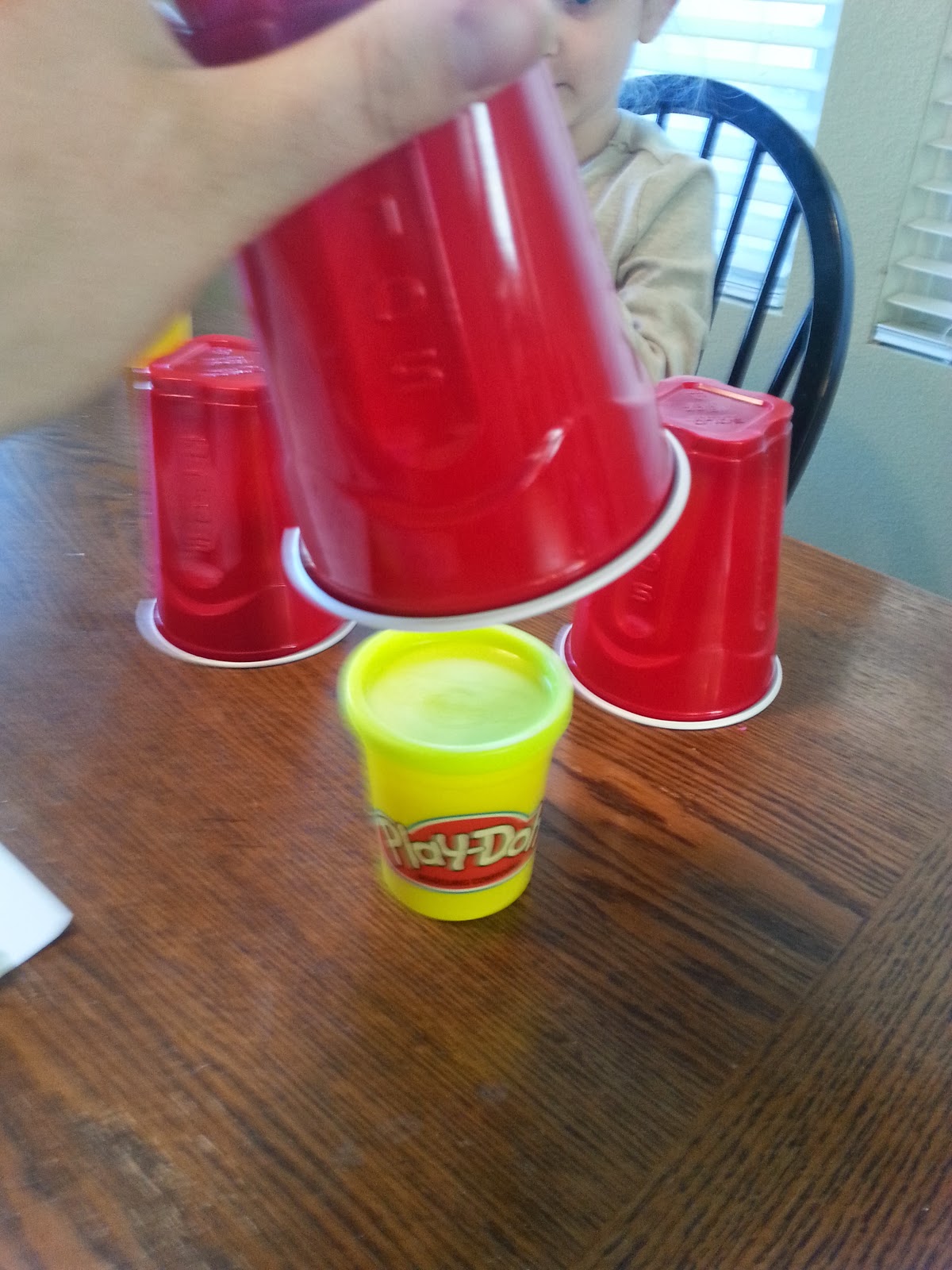 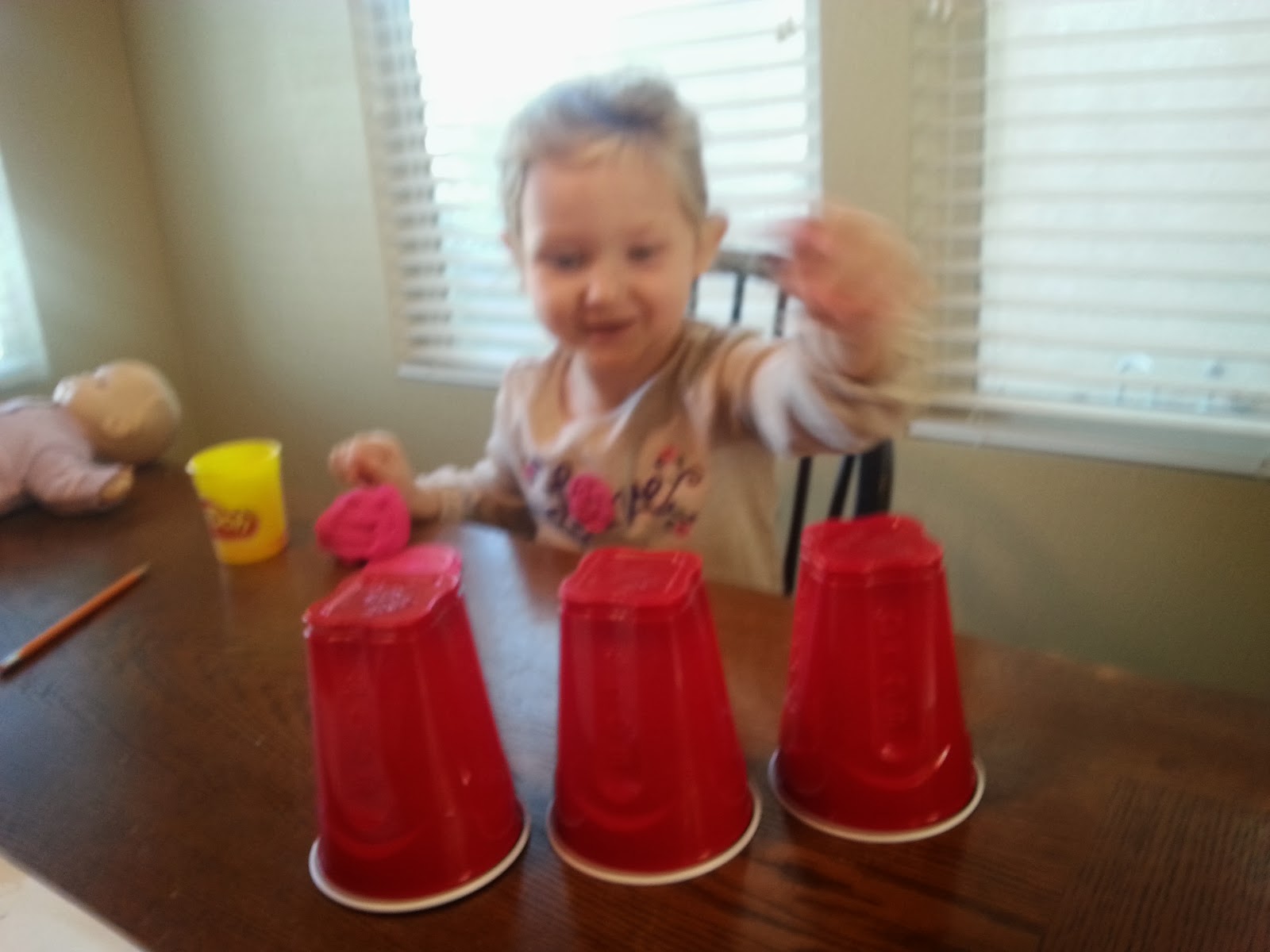 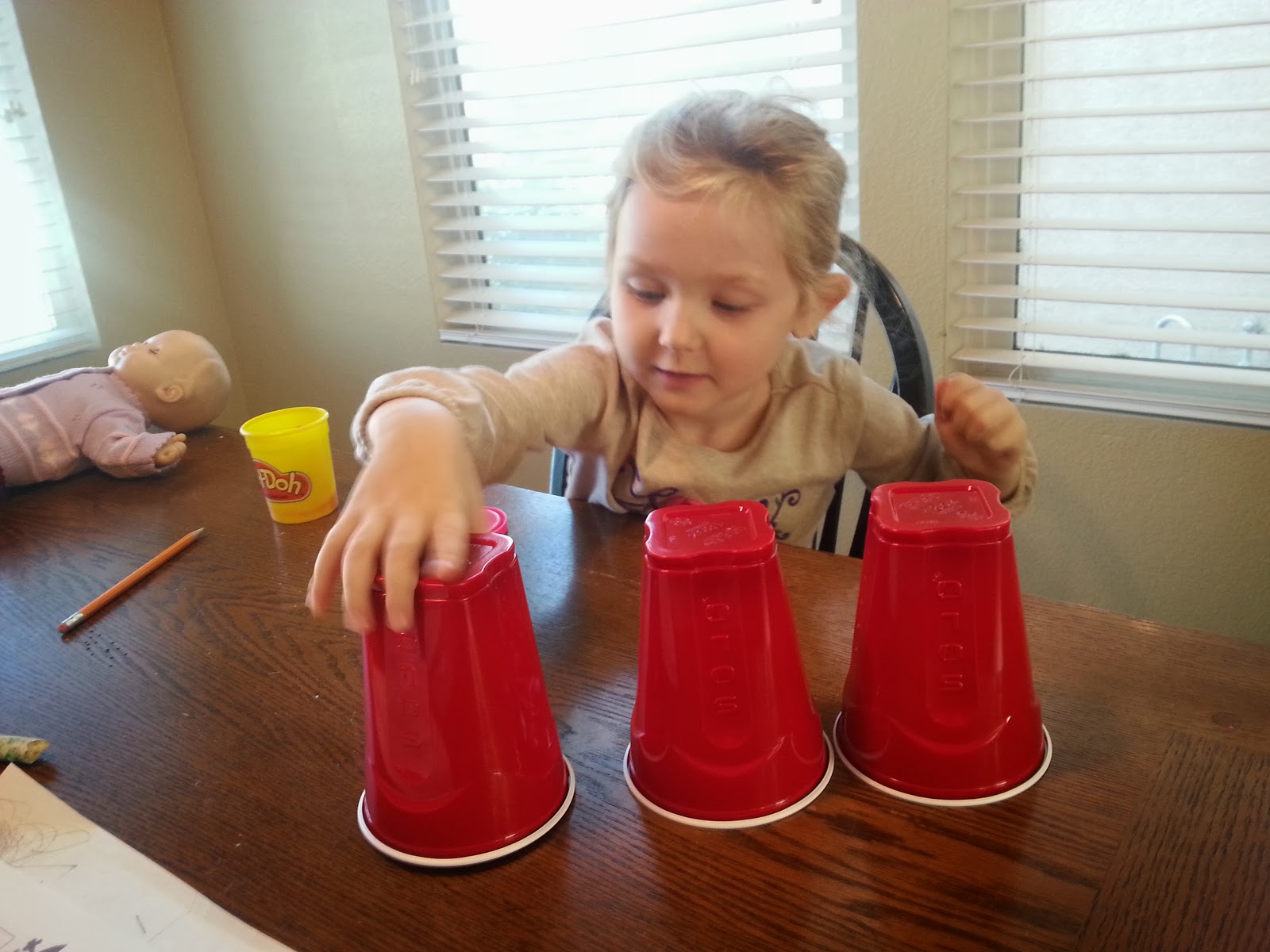 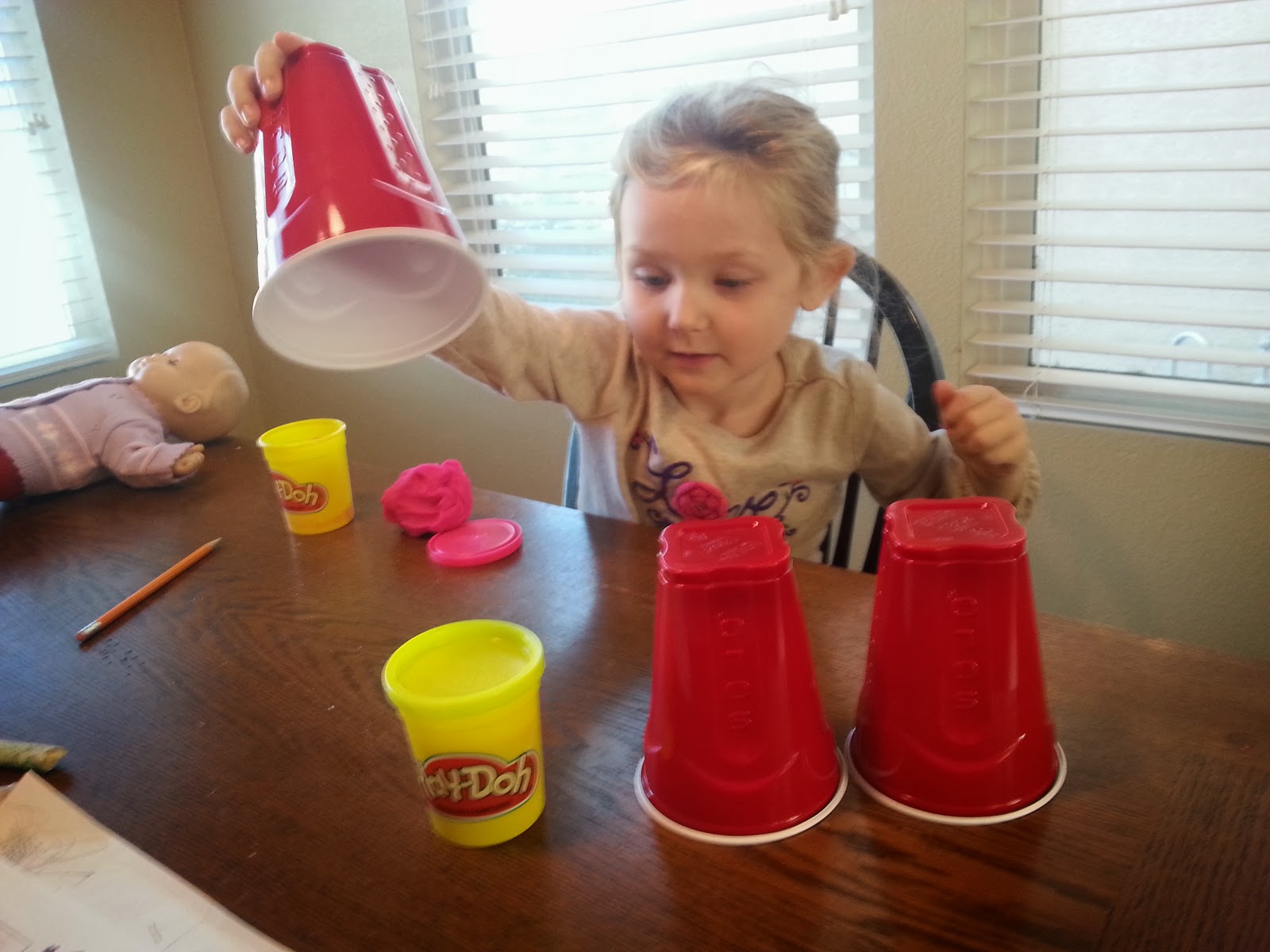 One of my favorite things about this week, though, was taking school outside.  I want to do this so much more often!  For another letter activity, we took the sidewalk chalk and drew the letter "J" all over the sidewalk near the park. 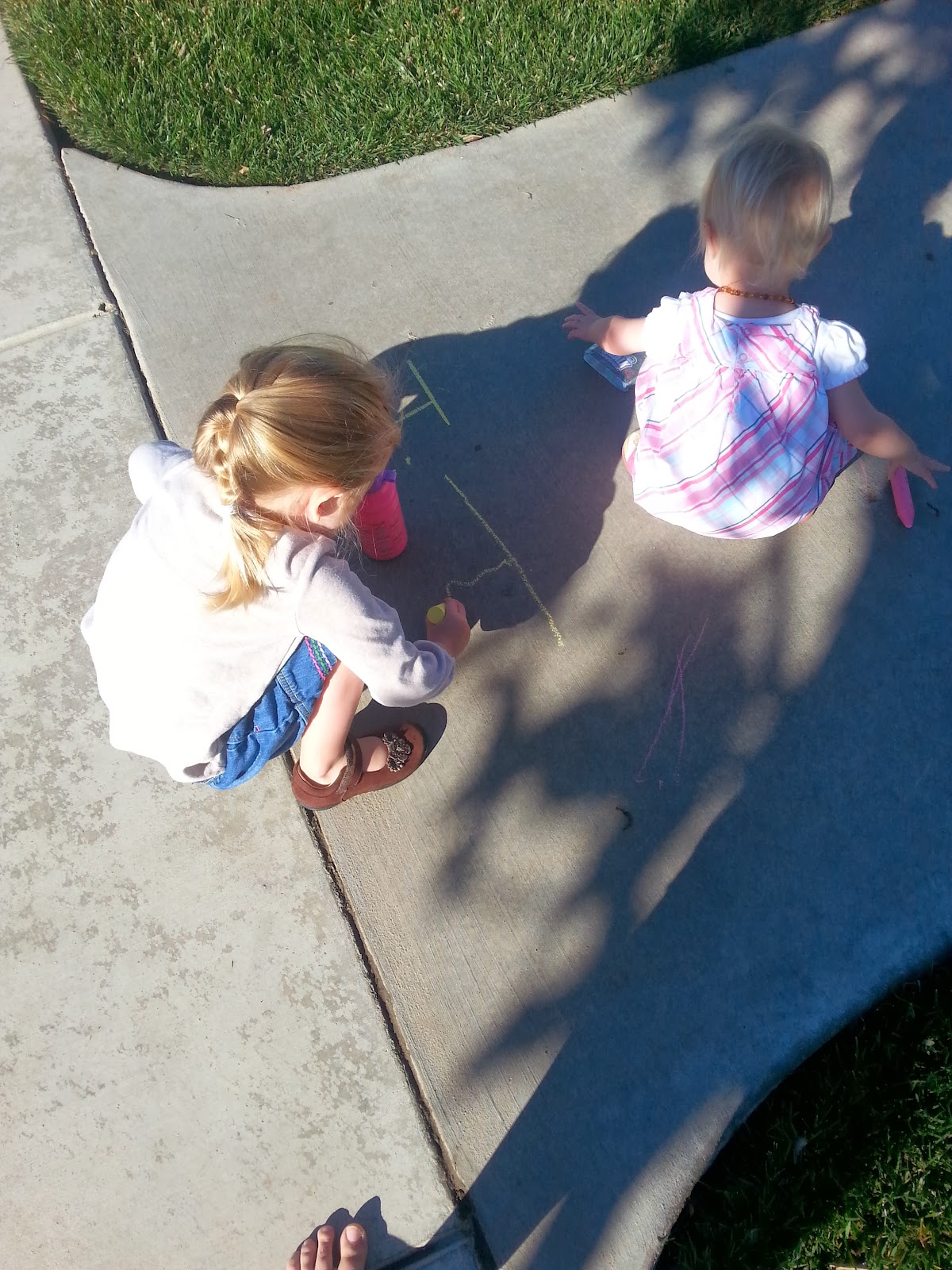 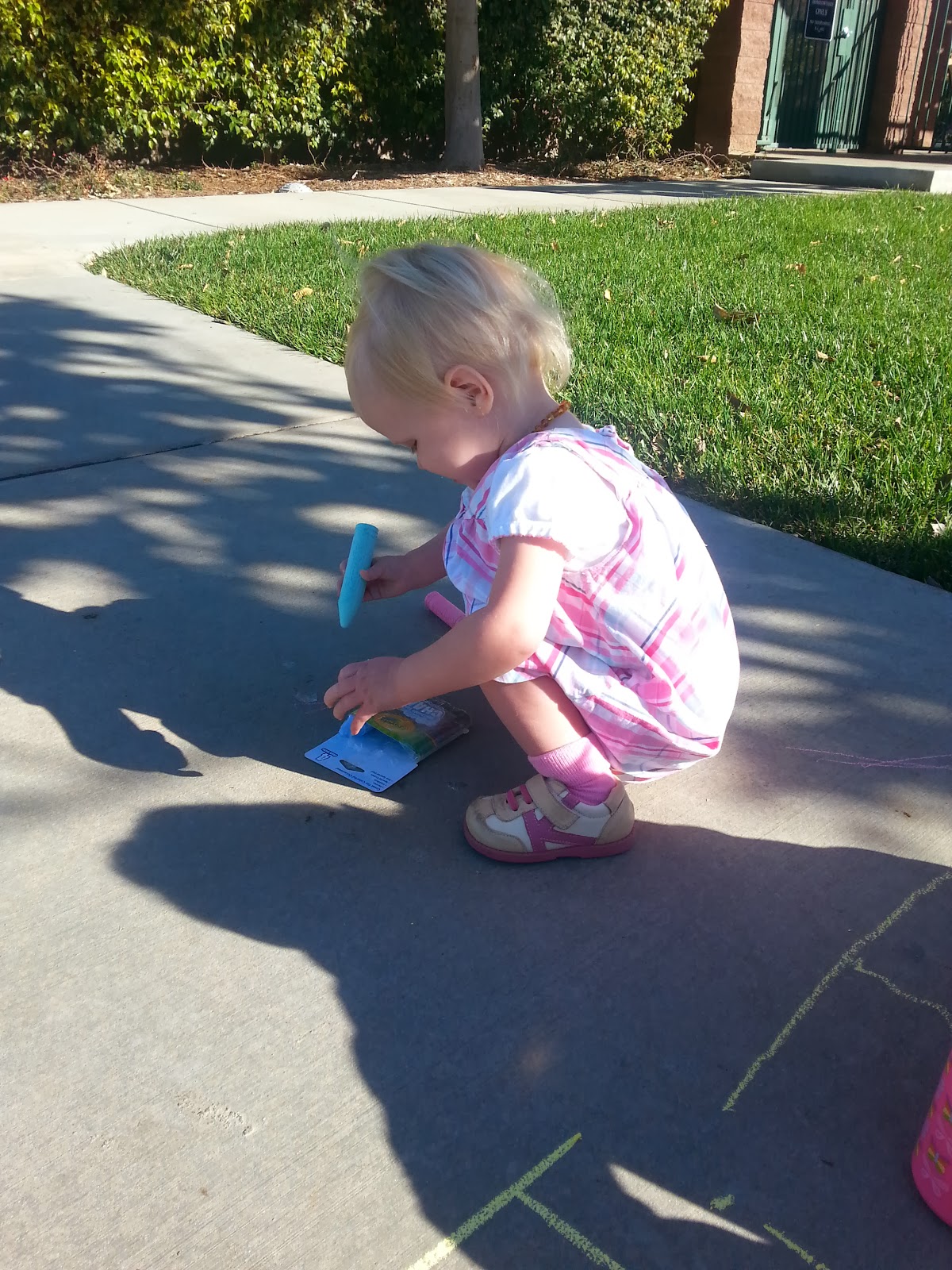 Our last activity and story was about Saul and Samuel anointing Saul as King!  I drew a big oval for a head and Claire drew a face in the oval, representing Saul. 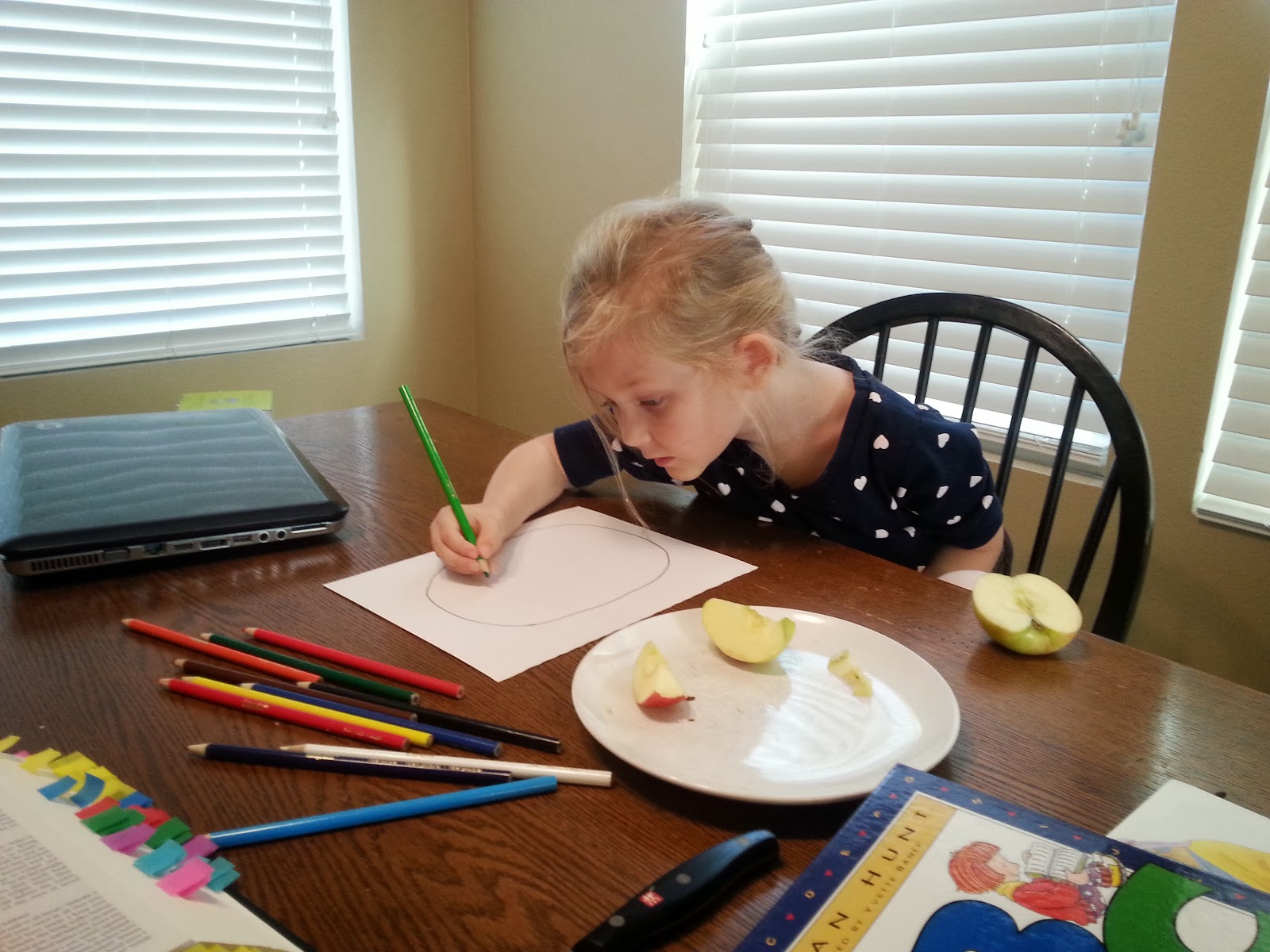 Then I took a few drops of doTERRA Frankincense oil (only a few drops! That's not a cheap oil. . . but it's am.az.ing)  and then let her take a q-tip and put it on her "Saul's" forehead.  She really seemed to understand the concept and liked her "oil painting" for sure. 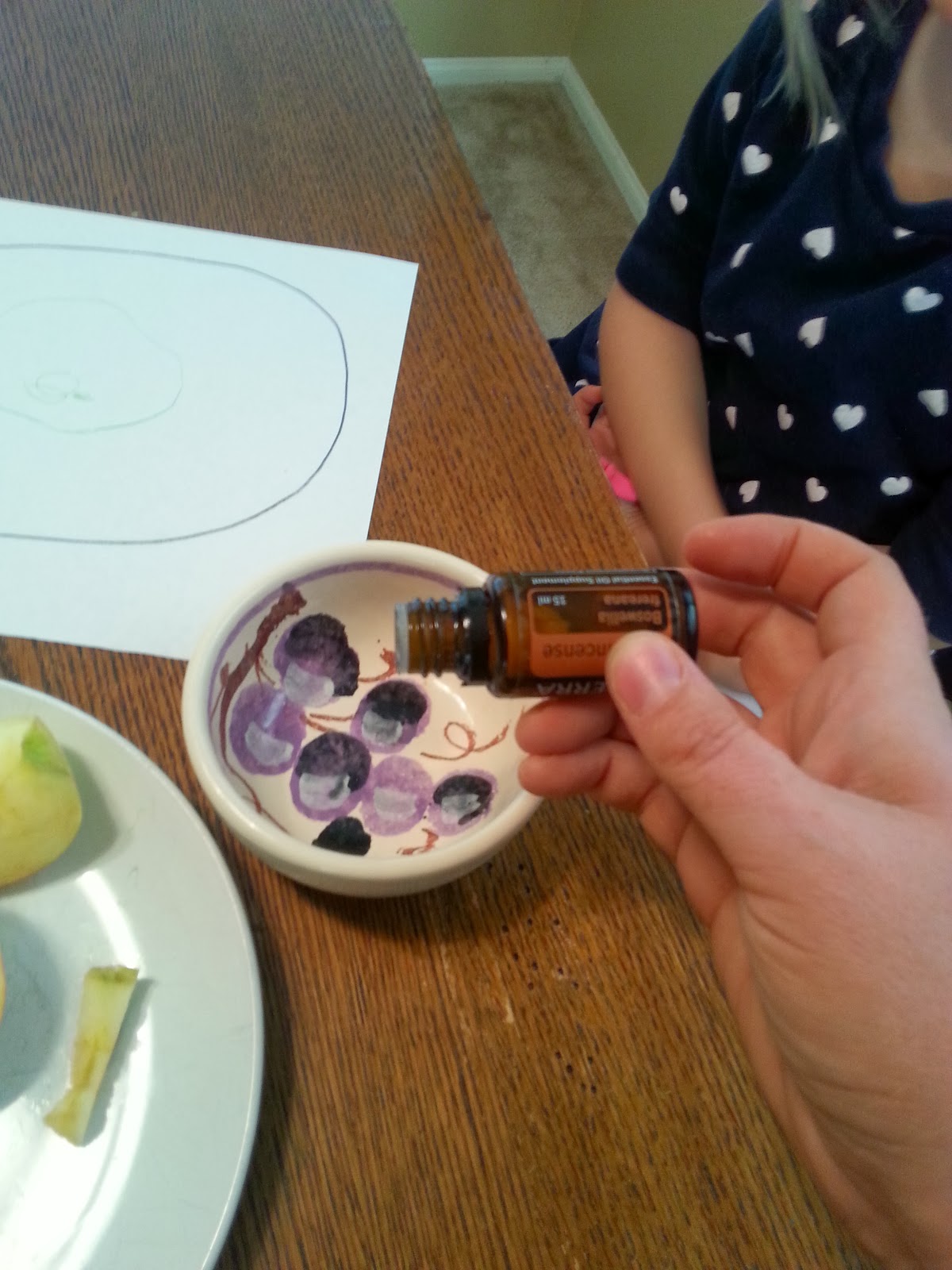 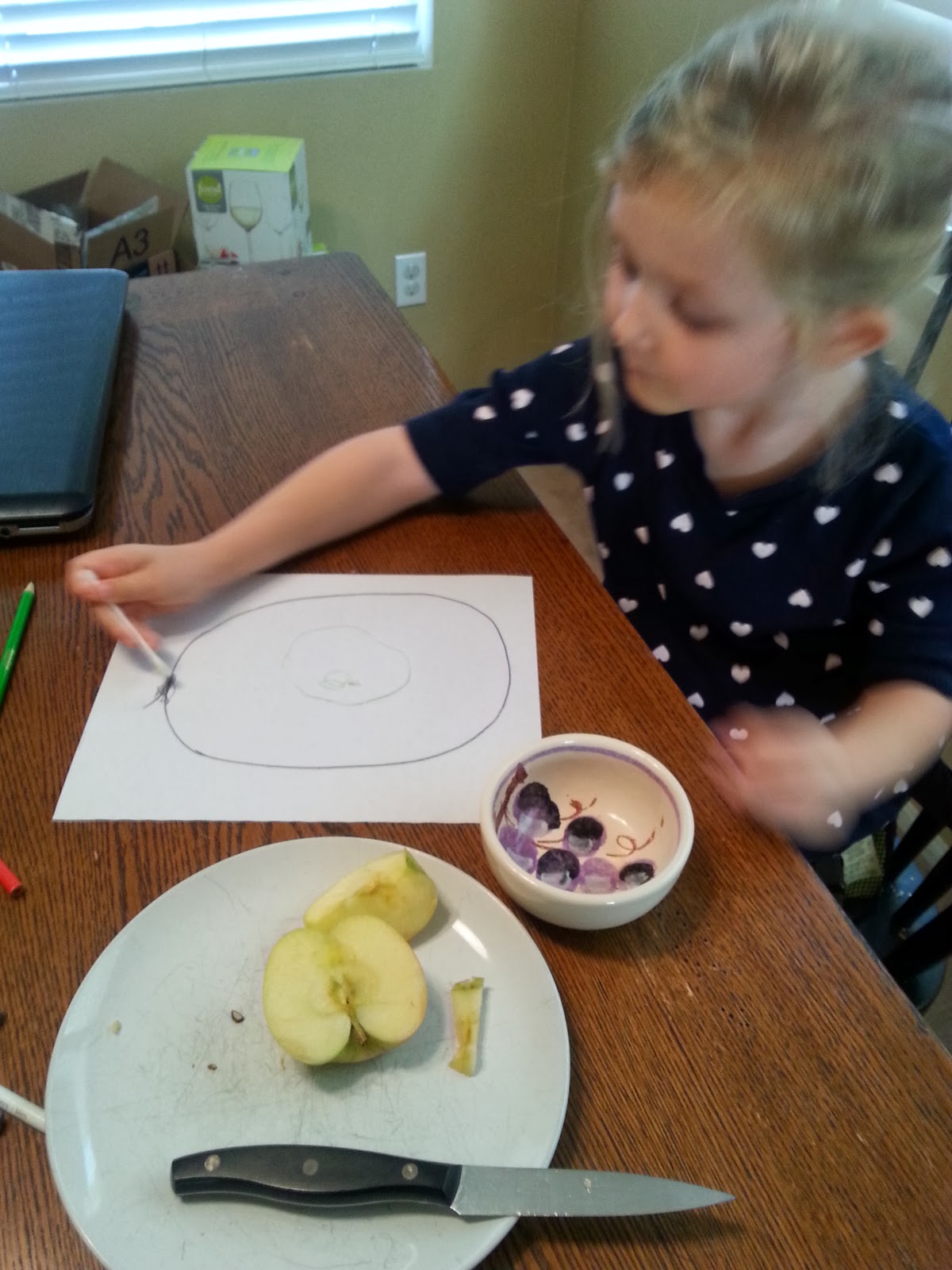 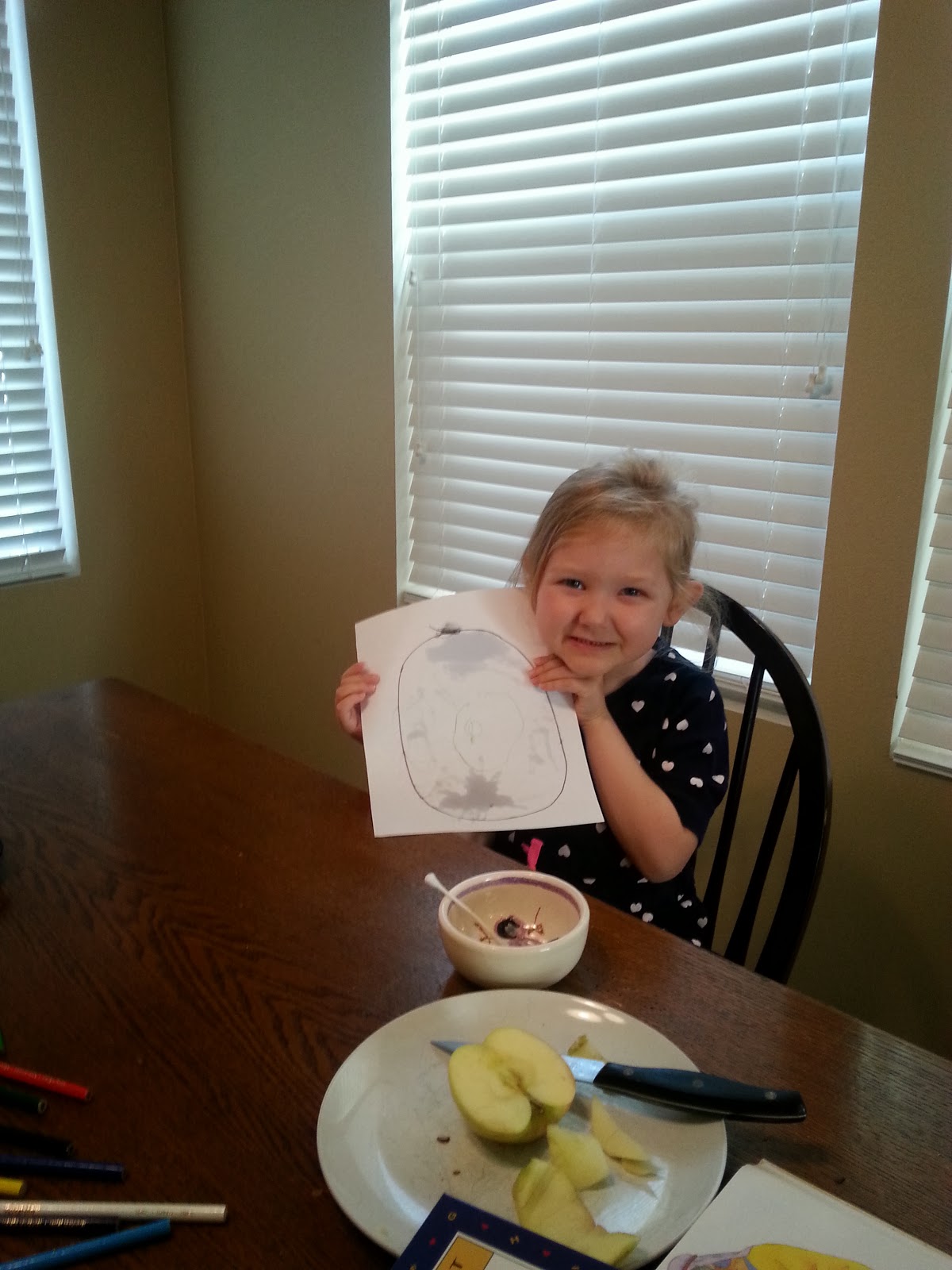 Friday afternoon we got to go do something special.  When I was pregnant with Claire and a few times when I was pregnant with Ashlyn, I took a prenatal yoga class where I met my teacher, Dolly.  Dolly has kept in contact with many of the pregnant mommies and babies from the Mommy and Me class and invited up all to come and bring our older kids (3-10 and allowed the toddlers to be there too!) for a kids yoga class.  It was so much fun!  Poses and stories and moving and acting like different animals.  The kids LOVED it and got a lot of energy out that afternoon, for sure!  She's agreed to have us do this once a month.  It's nice to be back in that little yoga studio where it all started when I was pregnant with Claire, 4 years ago.  Seems kind of unreal. 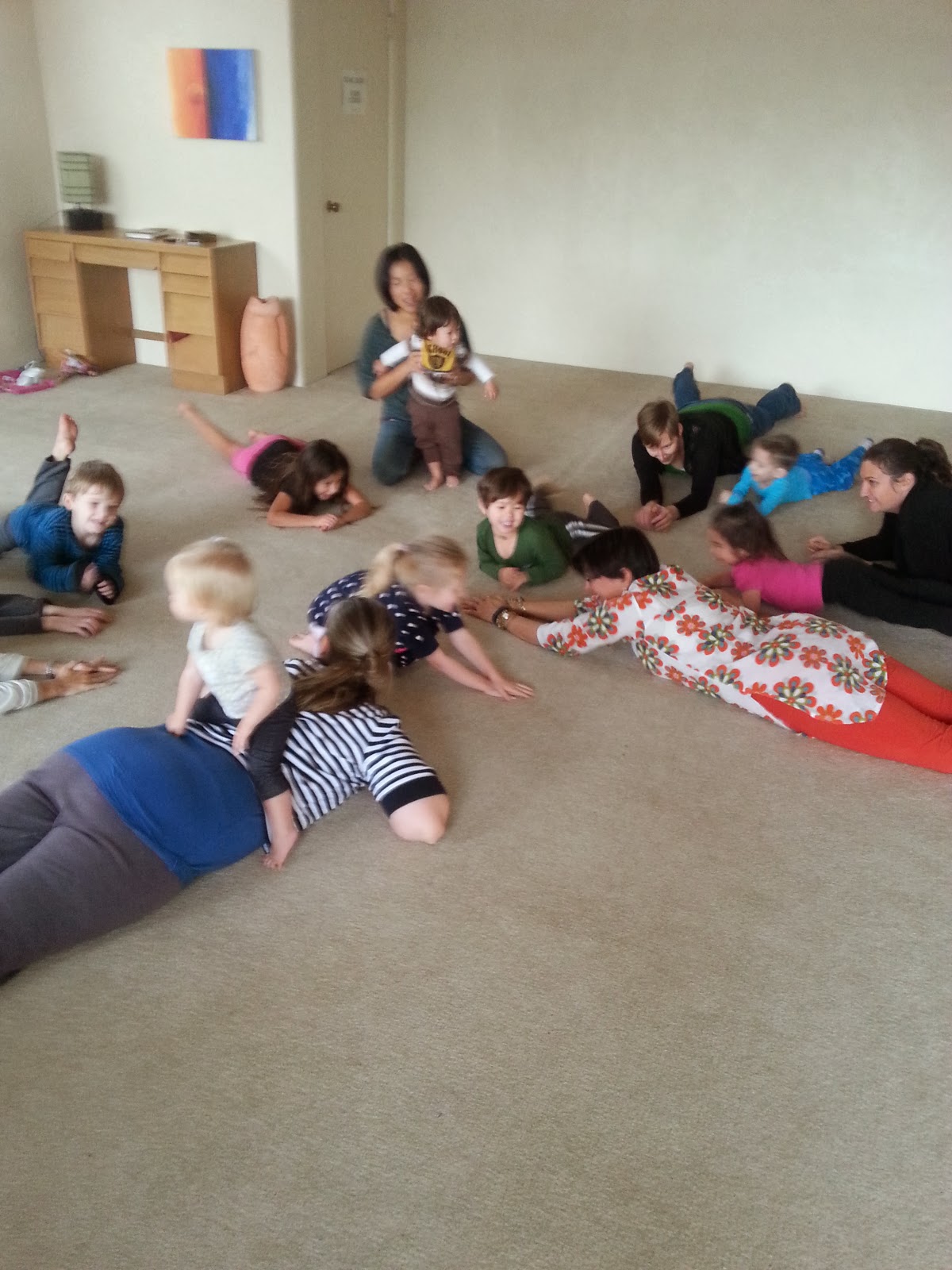 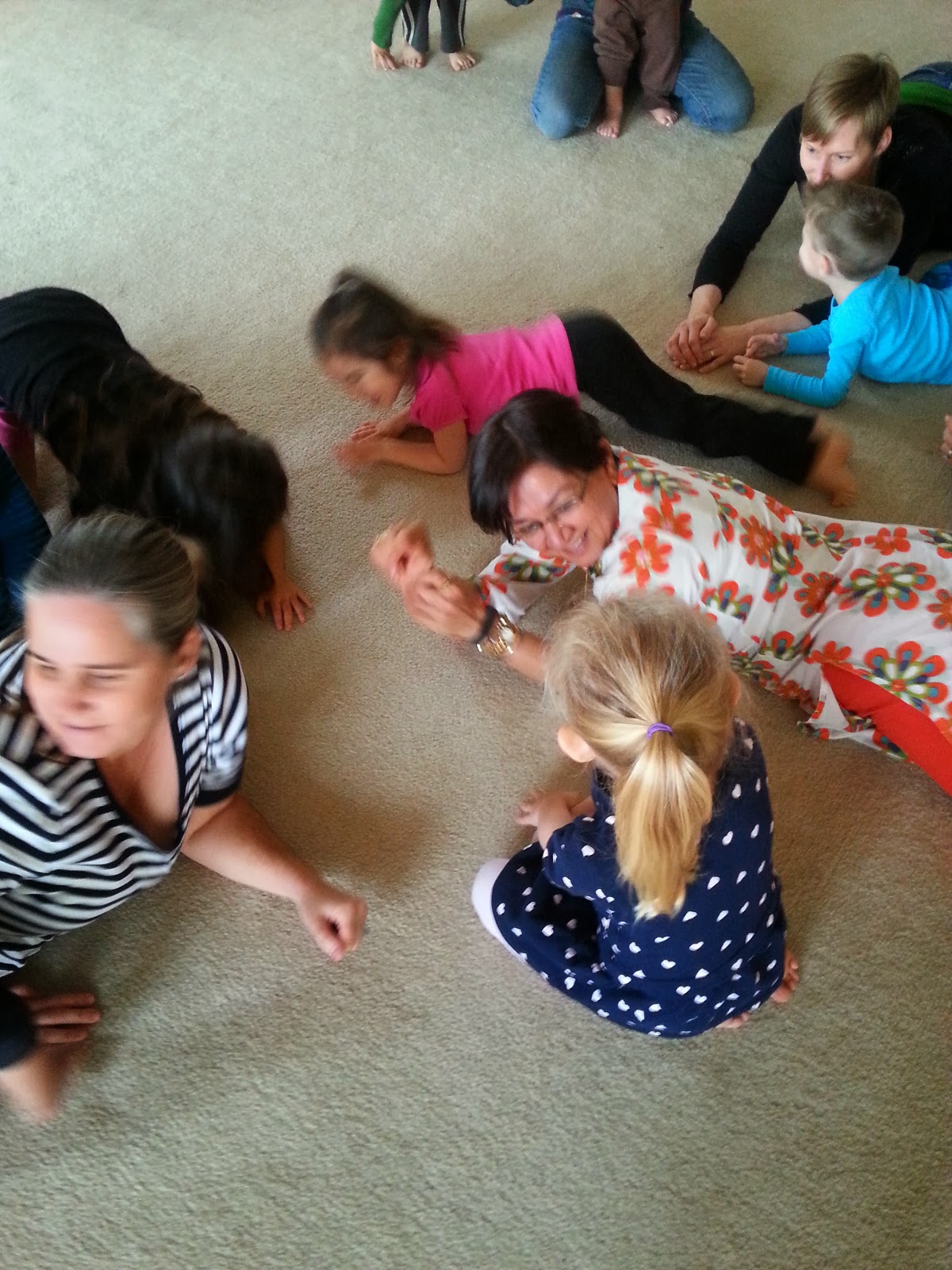 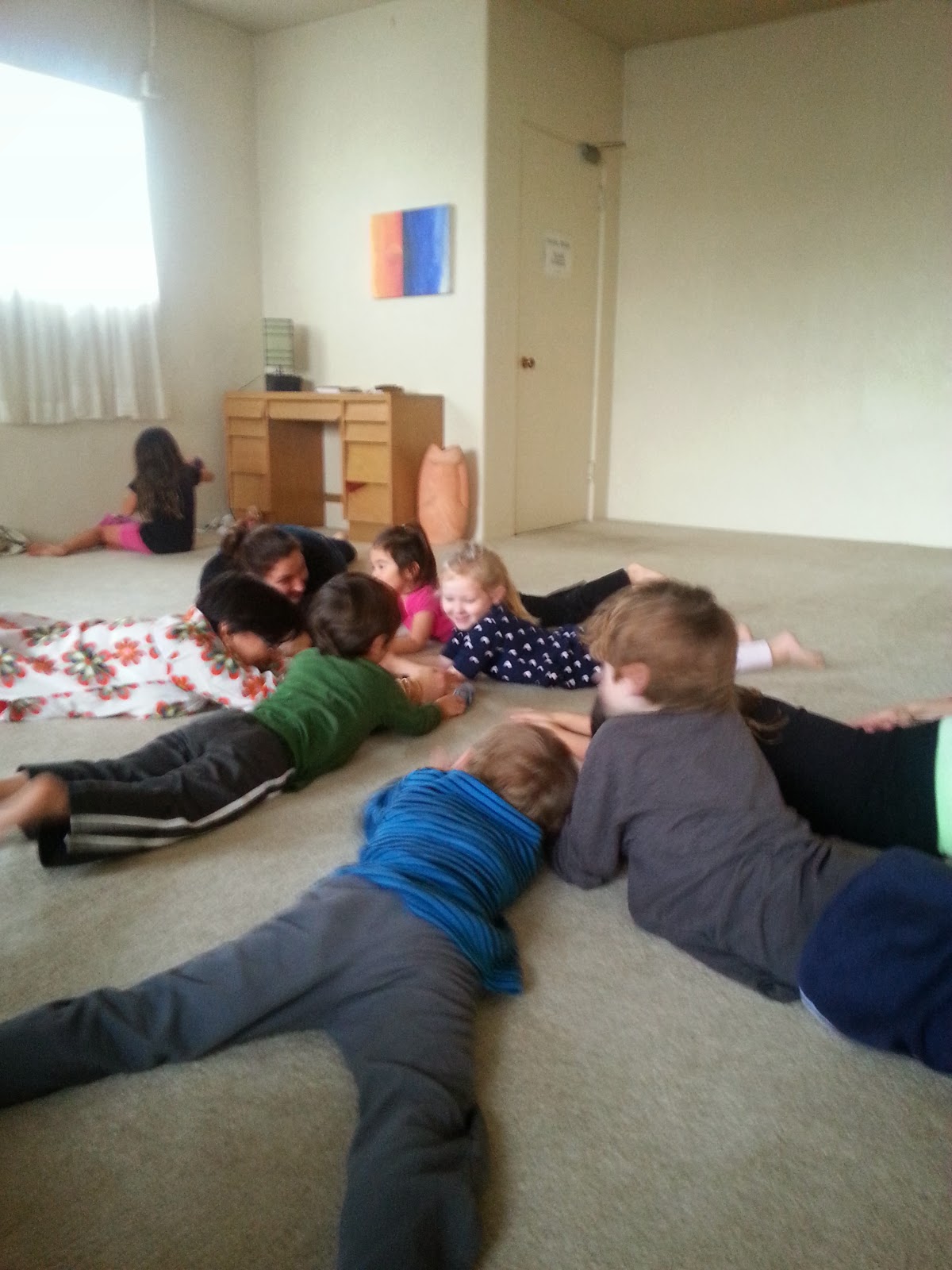 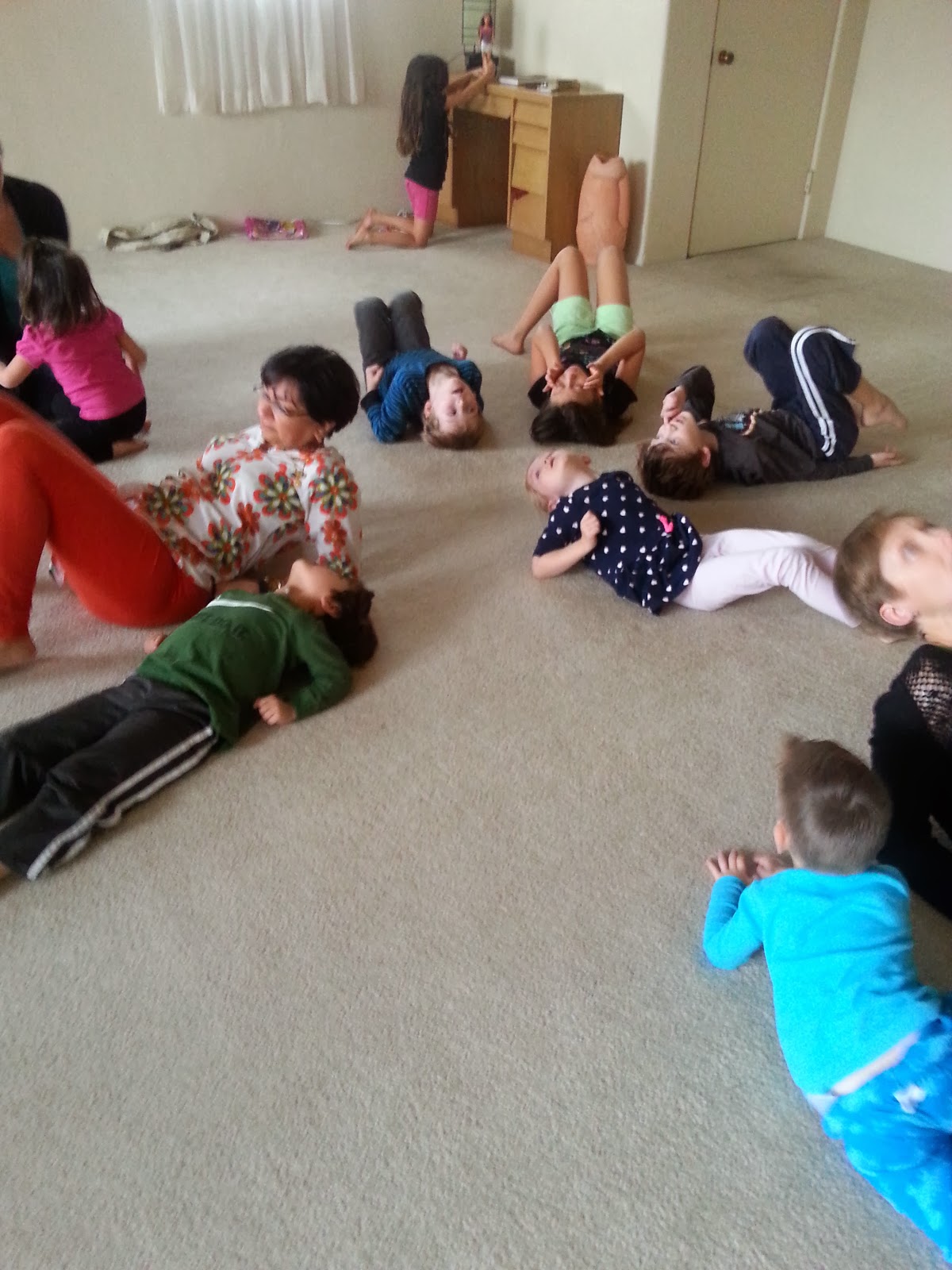 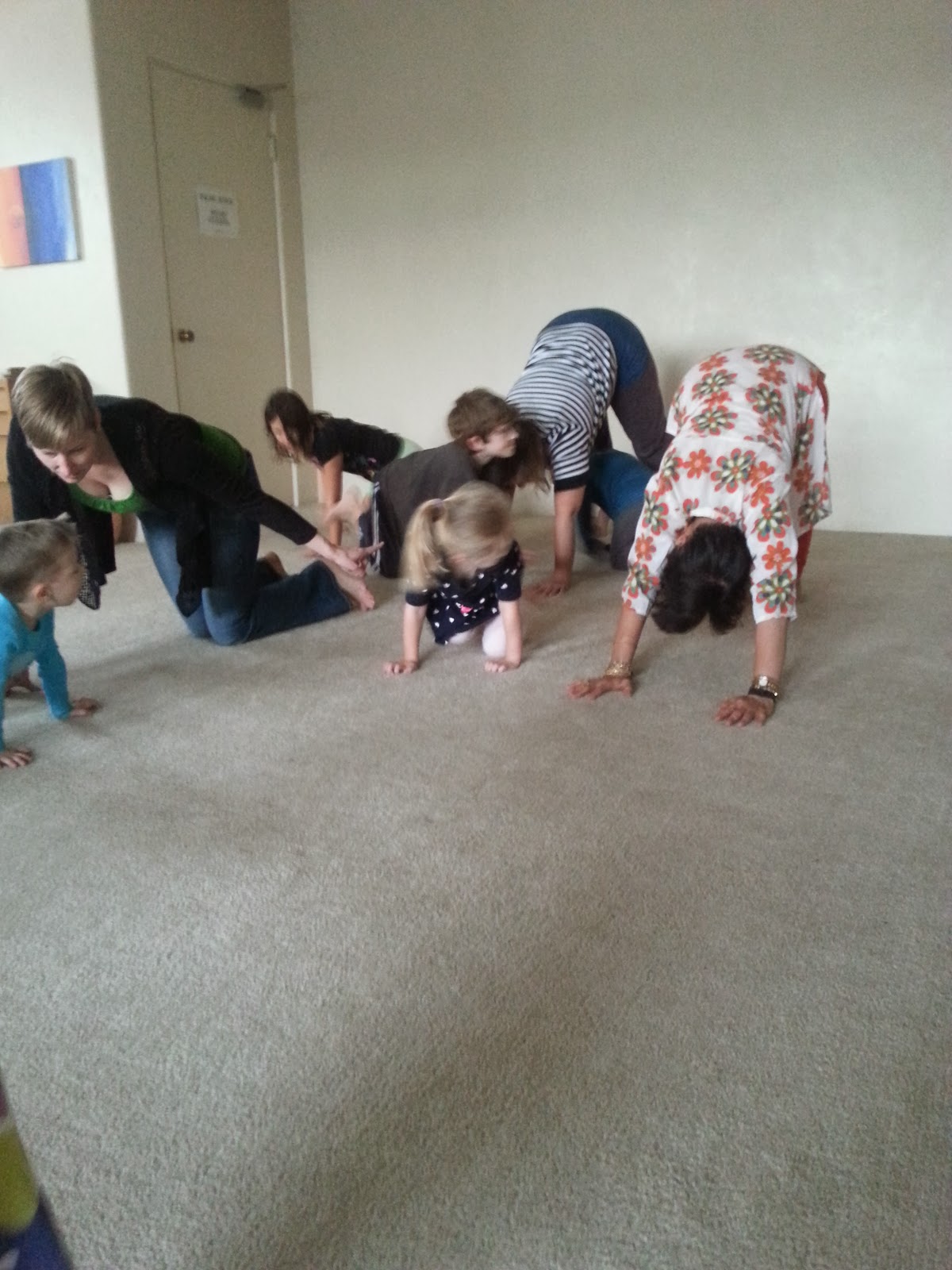 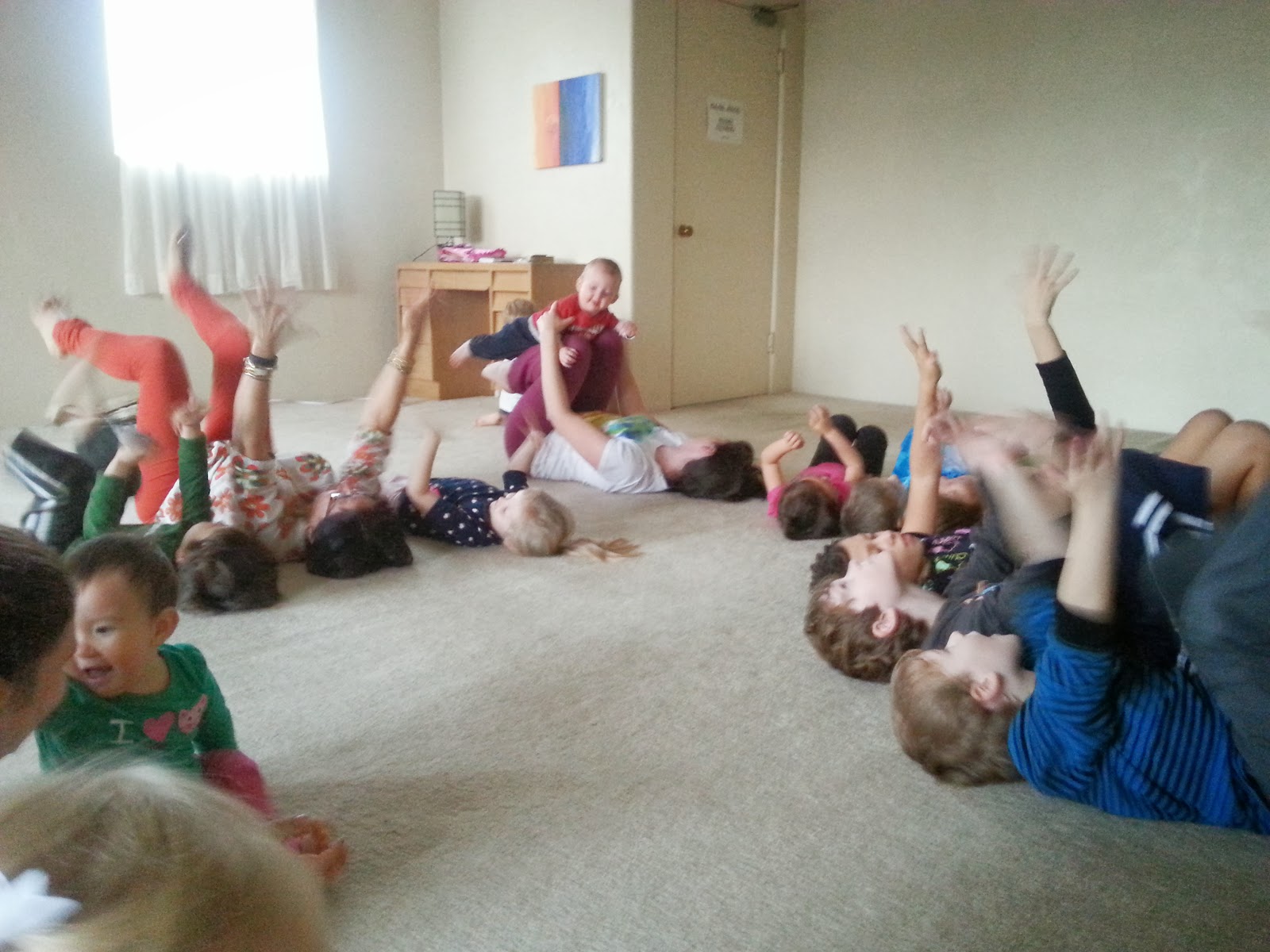 This weekend, we also started a new thing with Claire, as well.  Christian and the girls were waiting for me to finish dinner and I said to Christian, "Why don't you teach her her first lesson from her piano book.  She got the Alfred "Young Beginner" book for Christmas.  It went well. She stayed pretty engaged.  The lesson revolved around teaching her how to hold her fingers and which fingers were her 1st and 3rd and so on.  It taught her the black keys first.  Really simple.  I'm thinking Christian and I can take her through the first couple books and then we will have to have my mom teach her or if she is took busy, we will see about finding her a teacher.  But for now, we will do it ourselves as long as she seems interested.
Looking forward to more music and learning in the house this year! 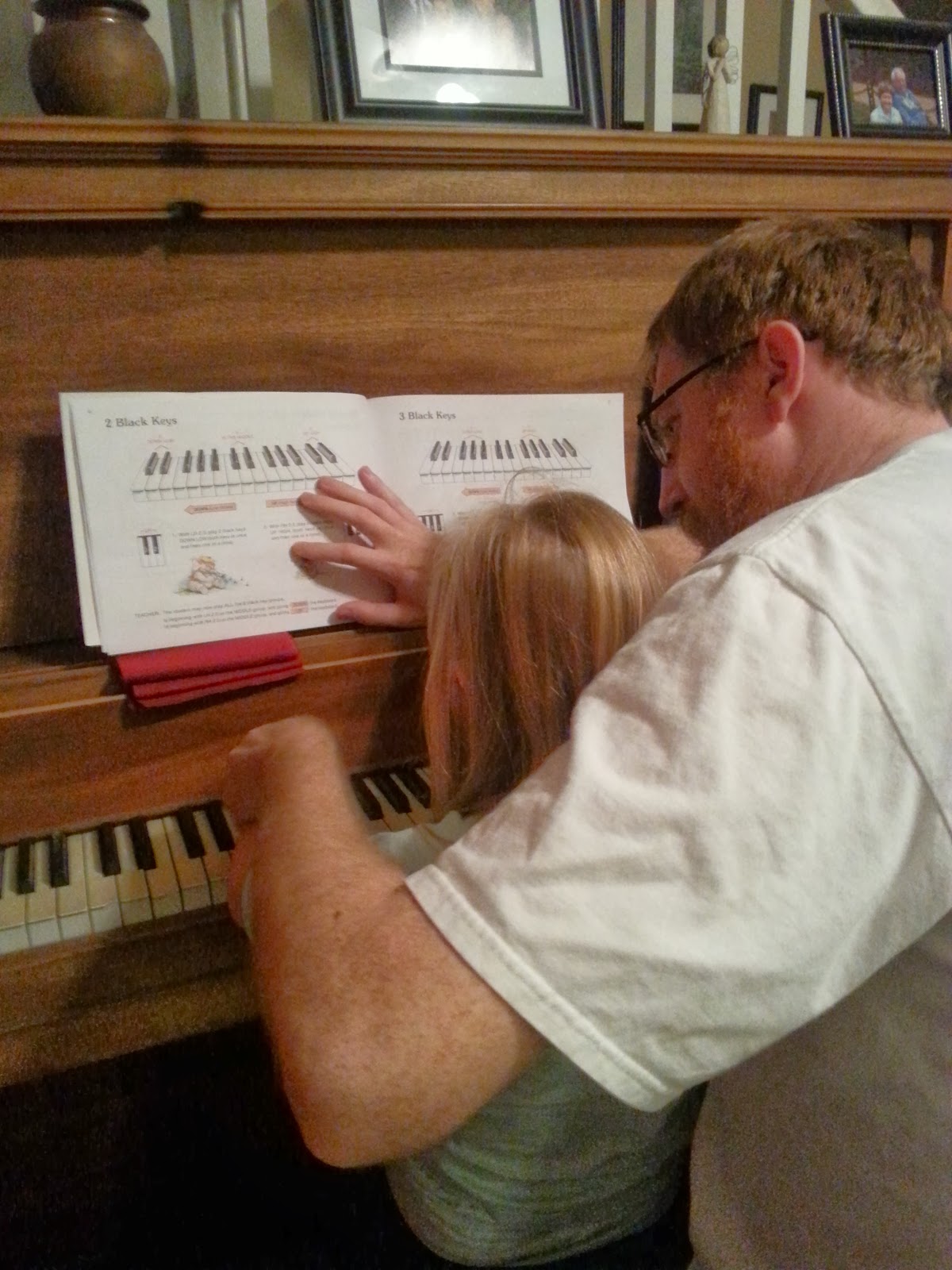