The Kayaking Incident and The Little Rabbit 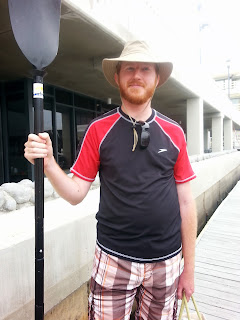 Kayaking and Cell Phones
This is the last picture I took on my old cell phone.  Christian, confident and ready to go on our Kayaking Adventure in Newport Harbor.  My parents bought us the 3 hour trip through Groupon for our 5th Wedding Anniversary.  We like adventure, so this seemed fun.  And it was, really fun and I can't wait to do it again.  However, we were pretty stupid and didn't put our phones in baggies or tupperware or anything.  Just assumed we wouldn't capsize.  And of course, we did.  Out in the middle of the harbor, we hit the wake of a pretty hard boat and the next thing we knew, we were in the water.  Thanks to a passing yacht, we were able climb back into our kayak but our phones were toast.  Thank God for insurance on both of them, but it was definitely a lesson learned.  But it took a little bit for Christian to take apart both phones, attempt to save them, realize it was a lost cause, call the insurance company and place the claim and wait for the new phones to get to us.   Luckily, thanks to Google+ and the Autobackup feature, I still have all my pictures that I took on my old phone. So the first couple of weeks, I took our homeschool pictures on my regular digital camera.  I went to find it, and lo and behold, I can't find the camera anywhere to upload for this blog post.  Luckily, I got a few on the new camera the second half of the week.  So, here goes:

Homeschool Preschool Week 3: The Little Rabbit
This past week we rowed, The Little Rabbit by Judy Dunn.  Cute, cute story about a little girl raising a white rabbit who eventually has baby bunnies.  Brought back ALL KINDS of great memories for me from the days of raising our rabbits we had (didn't hurt that the main character's name was "Sarah" either).  The book is illustrated with photographs rather than drawings so that was a mice change up, too.  To Claire, this was "bunny week."  The week before, her Mommy and Me Music and Art Class did a bunny hat craft so she got to wear the hat during "school time." 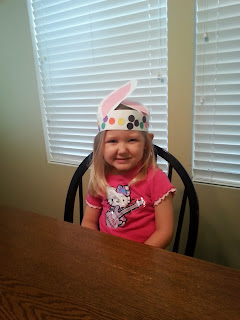 Our verse for the week was Proverbs 12:10a "Whoever is righteous has regard for the life of his beast" which we talked about meant "a good mad takes care of his animal."  Claire could recite the little verse by the end of the second day pretty well, since the subject matter was so fun to her.  She loves animals and her own pet, our cat, Tara.  It was a perfect unit for her.

Colors and Drawing
The first day of these, I have tried to start with art of some sort.  So we went to a page in the book that has a photograph of the main character, Sarah, lying in a field of grass with her white bunny, Buttercup.  She is surrounded by pink flowers.  We took a large box of crayons (64 count box) and had to pick crayons that most closely matched the color of the grass, the flowers, the rabbit, Sarah's yellow shirt.  Then I had her try and copy the picture with a picture of Sarah in the grass with Buttercup of her own.  She did alright and is getting a little better at representing things she sees (although her work is still very Jackson Pollock) 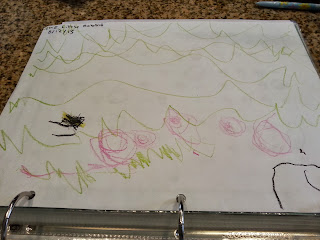 Counting Bunnies
Again, I got a few fun printables that went along with The Little Rabbit from Homeschool Creations and there were several things to use for numbers and counting.  I love how she still thinks everything is a game.  The first page was pretty clearly a worksheet page.  I don't want to rely on them too much but as long as she loves them, I'll go with it for simple things.  This one had white bunnies in squares.  Some squares had 3 bunnies, some had 10, some had 8.  She counted the bunnies and circled the correct number.  She did great and only miscounted a few times when she'd forget a row or whatever.  It's fun to watch her develop like this.  Then we played a little counting game.  In the story, Buttercup gets lost in a rhubarb patch.  Homeschool Creations has printables of cards with numbers 1-20 on them behind little pictures of rhubarb.  The final card is a picture of the bunny.  I would hide the bunny under a number, and Claire would point out which rhubarb the bunny was hiding under (it wasn't too hard to figure out).  The trick was, that in order to break bunny free, she had to tell me the correct number the bunny was under.  If the number was over 12 or 13, she usually didn't know right away so we would count, pointing at all the numbers.  She wanted to do this over, and over and over again.  Great, great activity! 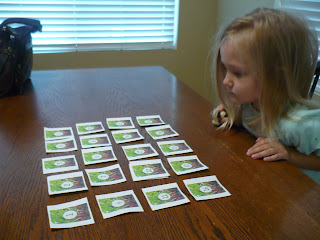 Days of the Week
In the book, Sarah names Buttercup's 7 baby bunnies after the days of the week.  Perfect to teach the days of the week to Claire.  This made me bring up some of the things I used to do when I taught history to middle school kids.  I think art and drawing is a pretty powerful way to teach people of all levels and it's GREAT for teaching a three year old who doesn't quite know how to read yet.  Next to each day of the week, we drew a picture of things we do that day to help her visualize the concept of each day having a name during the week and to allow her to see that the week repeats itself, for the most part.  This will take a LOT of reinforcement and I'm thinking about posting something with her days of the week somewhere in her room so she, daily, gets the concept, not just during this lesson.
Sunday: Drew a picture of Church
Monday: Drew a picture of a girl doing ballet since that is when she has her dance class
Tuesday: Drew a little girl smiling since there is nothing scheduled on Tuesdays and she gets to relax at home
Wednesday: Drew someone swimming since she has swimming lessons on Wednesday
Thursday: A picture of a Teddy Bear since she has Mommy and Me Music and Art Class that day (She calls it "Bear Class" since they sing the Teddy Bear Song every class)
Friday: Drew a picture of a car since we are going to try and do our homeschool fieldtrips on Fridays
Saturday: Drew a picture of Daddy since Daddy is home with us all day on Saturday
We finished this day's lessons with singing the Mr. Rogers "Days of the Week Song" that I remembered learning as a kid.  She picked it up pretty fast and we sang it everyday after that. 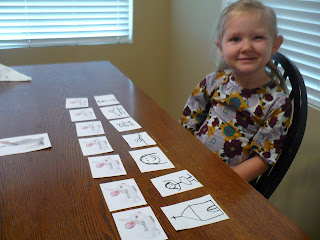 Writing and Letters/Sounds
Writing and copying is something I don't really push since I don't want to burn Claire out, but so far, she enjoys it so we go with it.  This week we focused on letters "R" for Rabbit and "H" for Hutch (the rabbit's home).  We did a few activities where she had to place all the items that began with letter H together, another game where she worked on syllables (not totally sure she really got this one but wanted to keep playing because she liked clapping the words out. . . definitely one to play again since she liked it and assume that soon it'll click).  The rest of our Language Arts time was spent writing out letters and words and sentences.  She is certainly proud of herself when she finishes a page. . . 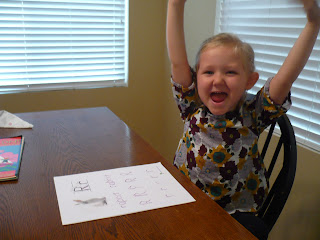 Compare and Contrast: Flowers and Animals/ Pet Rabbits and Wild Rabbits
Buttercup, in the story, meets several other animals.  There are also many scenes outside where the rabbits meet up with several types of plants and flowers.  So we did some classifications (super easy for Claire) and sorted the animals and flowers.  But then we talked about why they are different (animals move, make noise, breathe, etc. and plants do not.
We also compared Buttercup with a wild bunny she meets in the meadow.  Buttercup is white.  The Wild bunny is brown so he can hide from predators.  Buttercup has pink eyes and the wild bunny has brown.  The wild bunny lives in a hole outside, and Buttercup lives in a hutch in Sarah's backyard. 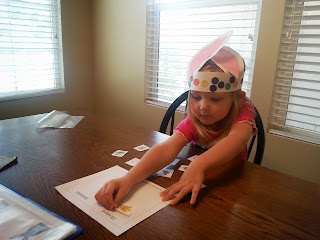 Taking Care of Pets: Mr. Rogers
One of the last things we did was I let Claire watch an old episode of Mr. Rogers Neighborhood about taking care of animals/pets.  It struck me how simple this little show was and how much Claire LOVED it.  You can find countless, FULL episodes here. 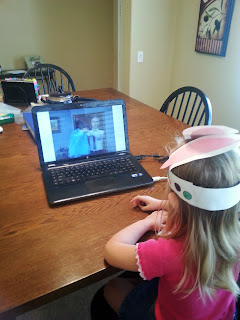 Sensory Box
Claire's favorite The Little Rabbit activity was definitely her sensory box she got to put together.  I ordered a little miniature hutch off Amazon for a few dollars and a miniture figure of a little girl holding a white rabbit.  She LOVED putting this together and playing with it. She talked all about it this was "Sarah and she's holding Buttercup they play in the grass and this is Buttercup's Hutch."  I could probably add more elements from the story- flowers, a turtle, another brown rabbit, baby bunnies etc. but this is what I had time for and it was great. 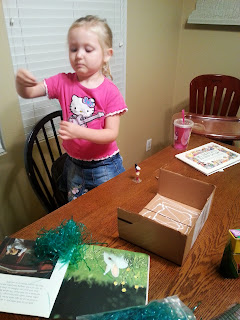 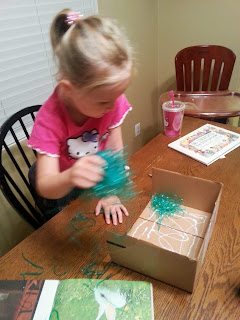 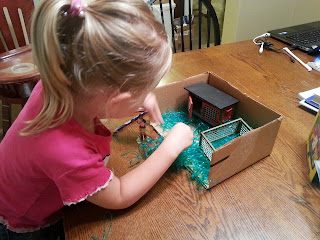 Field Trip: Kahoots Pet Store:
On Friday, we took our very short field trip to Kahoots Pet Store so she could look at the baby rabbits and other pets there.  Unfortunately, she couldn't pet them and there seemed to be a very suspicious pet store employee following us around the store keeping a watchful eye on us as we looked at the animals.  Both girls loved it but it wasn't what I wanted.  Claire pointed to a little white baby bunny and said, "Look! It's Buttercup!"  Yay!  She connected it, though.  That's what I was going for! We wound up buying some cat litter and some cat treats for Tara and went on our way. . . 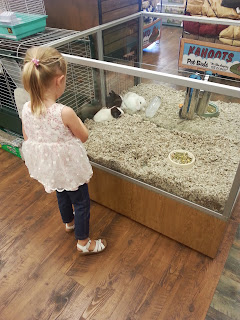 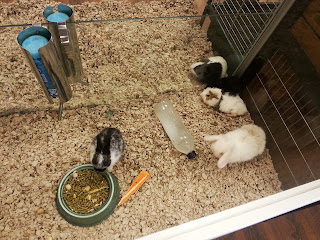 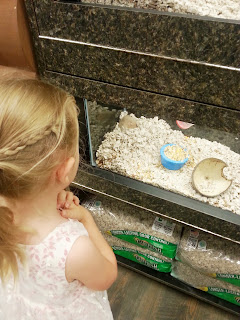 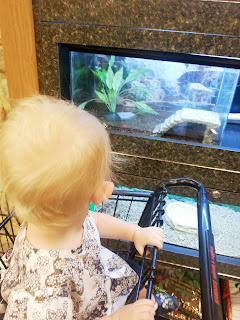 Moral of the story, wee three of Herman Family School went great!  On to week four!  Can't believe we've been at it for close to a month!  Doesn't seem that long!  Things will change, though, in a couple weeks when I return to the school part-time.  We plan to continue teaching her at home so I'll update with our new schedule and how we'll make it work and how it's working soon!  For now, enjoying these last several weeks!

Labels: before five in a row, Claire, homeschool, homeschooling, preschool