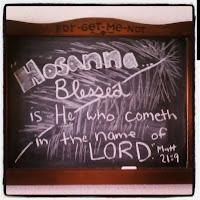 I wanted to make a bigger deal out of Easter/Holy Week than I did but I was able to get a few things in that I wanted and I think it turned out great.  I have stored up lots of fantastic memories from this past week and I'm hoping Claire is starting to hide a few things in her own heart and that the wonder of Christ's love and who He is and His work for her becomes more and more evident as we continue this journey.
For Palm Sunday, I decided to get a craft together for Claire and her little buddy, Logan for church.  The children in our church are with the parents in worship, for the most part, but in the last year or so, a few volunteers have put together a short Sunday School class for the kids during the sermon.  Thus far, we have put all the kids together, but I thought I might pull the littles out for a Palm Sunday Story and craft.  Pinterest to the rescue. I found a easy, cute craft for the kids using their handprints to make palm branches.  We read the story and practiced saying "Hosanna!" (Which is really cute with 2 year olds) and made our branches.  I know they are "getting" everything but I keep working to build this foundation.  Our house didn't look like a house when it was a concrete slab but without the slab, it's not a house.  So for me, Palm Sunday was about teaching my little one that there's only One fit to worship. 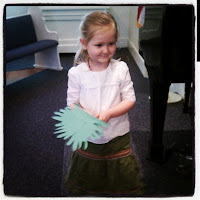 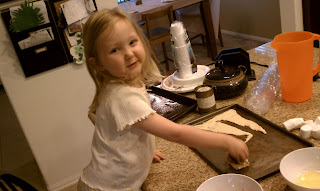 The rest of the week I tried making sure we talked about the crucifixion (age appropriate of course).  We read the story out of her story Bibles a couple times.  She's known, "Jesus died on the cross because He loves us"  For a while.  She associates the cross with Him, for sure.  We were coming up on a Methodist Church which a huge cross on the steeple and she just about went ballistic from the backseat not long ago.  "Look mommy, look!  Cross! Jesus"  Apparently, this is all sinking in, which is good.  So for the resurrection, I thought I might go ahead and do Resurrection rolls with Claire and see how it goes.  I knew teaching the Resurrection to a small person who really doesn't quite understand death was going to be interesting but I decided to do it anyway and reminded myself of the whole "building a foundation" thing.  I've been having her help with cooking dinner, lately, and thought she could also get a cooking lesson out of it as well.    So Saturday night we started after dinner.  These are so, so easy.  I pulled out the marshmallows and melted the butter and put cinnamon and sugar in a second bowl.  Told Claire that we were going to pretend the marshmallow was Jesus.  She seemed okay with this.  So we continued.  "Now when Jesus died on the cross, they took his body and put oil on it, since that's what the custom was in the place He lived. Can you take our pretend Jesus and roll Him in the butter."  "Oh, yes, mommy!"  So she took the marshmallow and rolled it up and got butter all over it.  "Then they took Jesus and put spices on Him so he wouldn't smell in the tomb, can you roll Him in the cinnamon and sugar?" "Okay, mommy" and she rolled the marshmallow in the cinnamon and sugar.  So far, so good, right?!  Then I gave her a triangle from the package of Crescent Rolls. "Okay, this is going to be our tomb.  They put Jesus' body in the tomb and sealed the tomb up tight"  And together we sealed up our marshmallow (I helped with this one since it doesn't work well if the marshmallow isn't completely covered).  We put the rolls in the oven and talked about how His body was in the tomb for 3 days.  After the allotted time (12 minutes, I recall), we took the rolls out and I gave one to Claire. We opened the roll up and "voila!" the marshmallow had vanished.  Perfect object lesson.  Empty tomb, Jesus isn't there's He's risen from the dead.  Claire's first response: "Where's my marshmallow?!" "Honey, Jesus has risen! He's not in the tomb!"  Claire looked at me quizzically.  Then, with a big smile she said, "Oh, yeah! Yay!" Then the smile disappeared and her concerned look returned.  "But where's my marshmallow?!"  I think she asked for that marshmallow a good 10 times.  So, she got a marshmallow and a Resurrection Roll that night and when to bed a little sugared up.  I kept telling myself, "You're laying a foundation, you're laying a foundation" and got a great memory out of the whole thing. 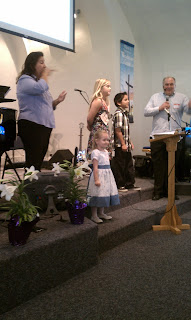 Easter Sunday, itself, was a little crazy. But a good, good crazy.  Saturday afternoon, I prepped the house for my family and Christian's family to come for Easter, finished my shopping for the egg hunt, baskets and dinner. After the Resurrection Roll event, I put Claire to bed and began working on her basket then got all the eggs ready for and Easter afternoon egg hunt.  So when Sunday morning rolled around, I was really, really glad we opted out of Sunrise Service this year.  We got the girls dressed in their blue dresses and got to the church at around 9:15 since we had to be there early for choir rehearsal and since Christian was leading the choir, we thought being on time should probably be a priority.  Service consisted of singing, sitting a bit, talking littles to the potty, and singing again.  At one point the the service, Claire was asked, with a couple of other children to answer the question, "What does Easter mean to you?" She's getting pretty good at figuring out "Jesus" is a pretty good answer to most church questions and for this one, she was spot on. Later, I took Claire and Ashlyn out for the sermon to Claire's class. Stayed there a bit, but went back into service with Ashlyn so I could sing again (our pastor had me doing something at different parts of the sermon, each time I passed Ashlyn to a willing church member to hold).

After church the kids enjoyed an egg hunt on the lawn.  The church put out a small bounce house.  Claire thus far, HATED bounce houses. So it
was pretty surprising to me to find her squealing like crazy and jumping around in the bounce house with her cousin, Marisol, who joined us that morning for church.
After naps everyone came over for dinner.  I made my first ham, which really wasn't that hard but it was one of those things that made me feel like an adult.  You know, have the whole family over for a major holiday and cook the main dish meat. Maybe it's just me.  But, everyone said it turned out grade.  I did a shank, made a glaze, stuck cloves in it, the whole bit.
When everyone arrived, there was a bit of down time.  Claire hasn't gotten to color eggs yet, so I went ahead and pulled out the dye and the eggs I'd boiled and let Claire and her cousin, Lila, color the eggs until dinner was ready.  They made a mess but it was a good mess and they were happy and having fun. Now we have a bunch of eggs just waiting for me to turn them into egg salad.  Later, after dinner, the girls had an egg hunt in the park across the street before the sun went down.  The whole group left around 8 or so. It was all exhausting, but I wouldn't have changed a thing.  That's that kind of "holiday stress" that I think I can handle; when afterward you sit on your couch with your feet up and sigh and think, "I'm so, so tired but that was so, so great."  Celebrating the resurrection. . .not sure what is more worth the work and more exciting than that. . . 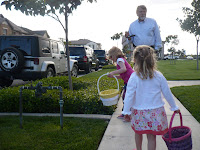