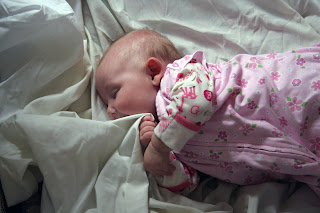 "There was never a child so lovely but his mother was glad to get him to sleep." ~Ralph Waldo Emerson

Sleep has never really been an issue for Claire. Ever. I mean, we had a bad night the night we brought her home but since then, it's been relatively easy. For the first few weeks or so, she woke up to eat every two hours. No biggie since she slipped right back to sleep after her feeding. But around 3 or so weeks she started skipping feedings until by 6 weeks she was sleeping until around 4 am, getting a feeding and then going to bed. By 8 weeks, she was sleeping from 8 pm - 6am. Brilliant. World best baby.
Things began to unravel at around 3 1/2 to 4 months. At one point, Claire let us know that the swaddle was no bueno. She woke up and cried every hour one night until I took it off, then slept like normal. Perfect. Easy swaddle weaning. Brilliant. Worlds best baby evidence #2.
Then I started napping her in her crib. She used to nap for hours in her swing. Great! But in her crib she was never a great napper. 45 min to 1 hour at the most in her crib or cosleeper. But I knew the transition had to be made. Soon she got into a crib nap routine. Not terribly long anymore but a routine nonetheless. Score. Brilliant. World's best baby evidence #3.
Then it happened. Mommy went back to work part time and Claire decided that the bottle was NO BUENO at all. Seriously?! So for the one feeding she needed while I was at work, she was on hunger strike. Would MAYBE eat an ounce for the sitter. So at night, she started waking at 3am to eat. Mommy liked the other arrangement better. For nighttime, she's now in her crib as well. She began to outgrow the co-sleeper. Not length-wise but width-wise since she now scoots all over the place and invariably winds up sideways. This coupled with the fact that Claire now likes to roll over in both directions, scoot and scrunches her tummy like she wants to sit up made her a rather restless sleeper. I had planned on co-sleeping longer than this, but a foot in mamma's face and daddy's snoring waking baby up are also NO BUENO. We still like her, but the "world's best baby" is starting to show her Psalm 51:5 side.
However, the last few nights have been the biggest cause for alarm, pause, indignation. . . whatever you want to call it or where ever you want to go with this. . .she's been back to waking up EVERY 3 HOURS! The night before, it was every 1 hour after 1 or 2 am. I can't remember. Good lord. What is this?! Teething? 4 month sleep regression? (several articles on this!), general insomnia? reflux? (her spitting up is a new thing these days as well).
Now, we are not the "cry it out" types. We think it's somewhat mean at this age. The kid isn't quite being "defiant" yet. Talk to me again later, when I can see the gleam of "like heck I'm going to go to sleep!" I'm ok with "fuss it out" but full fledged crying is not my thing. So, I'm hoping, "this too shall pass." And she'll be back wearing her "world's best baby" crown in no time. Many things I've read seem to support this hope.
In the meantime, I still have this brilliant little person in my care. Who, according to us, will always be the world's best baby. Really. Even at 4 am.
Posted by Sarah at 4:18 PM