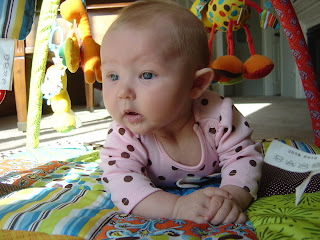 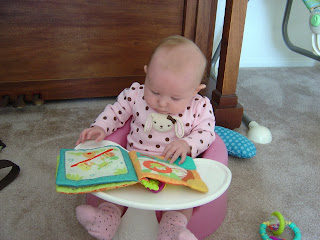 Our baby girl is growing! I've washed and cut the tags off all of her 3-6 month clothes and she's fitting nicely into them now! It's amazing. Not long ago I remember looking at those dresses and onesies thinking she was so tiny and she's never fit into them! She rolls over both directions and when she rolls onto her tummy, sometimes she pushes up on her arms. She has started to scoot forward a little bit while on her stomach, too. Apparently, early mobility is a trait she may have inherited from both my brother and I who crawled at 6 months and were walking by 10 months. I love that she's so strong and spunky but, at the same time, it'd be nice to be able to have an immobile baby just a little bit longer. Who knows, maybe she'll calm down a little bit. (I think that's my denial creeping in).
This past weekend, she also started sleeping in her own room as well. It took us a bit to come to that decision since we were planning on co-sleeping for a while longer but after much discussion, we decided this was the time. Claire is strong enough to roll over and I am not as concerned about suffocation issues as I was before and, recently, she started to wake up much more during the night. I began to wonder if we were all waking each other up! She did sleep a little better in the crib, only waking up once to eat. Even this is odd for her, though and hopefully, as she gets adjusted to babysitters and my work schedule, she's get back to being the great sleeper she's been since the first or second month of her life when she started sleeping 8-7 or so.
She has her 4 month check up with the pediatrician coming up, so they'll be more to say then, I'm sure.
There's the baby update. I need to commit to doing this more often. At least once a week. I've thought time and again that I need to do this more often and have considered topics. . . making it happen is the rub.
Posted by Sarah at 9:01 PM