The Weekend That Wasn't

I've been trying to come up with a post for a few months now that could cover the last several that I have missed while on my apparent blogging hiatus.  I didn't plan on leaving Halloween and Thanksgiving and Christmas undocumented.  Didn't mean to just disappear-- I just did.  I think one of my New Years Resolutions was to "Blog More."  Happy February.
Anyway, what finally pushed me back in front of this screen were the events of this past week.  Totally unexpected and totally awful.  Last Tuesday I started to feel a little "cold-ish."  Scratchy throat, stuffy head.  My nose was running by the end of the day.  Annoying but I thought I was dealing with it naturally and that it was just a cold.
I woke up Wednesday morning feeling like I had been run over.  Multiple times. My back ached.  My head was pounding.  I thought I might throw up.  But it was 5 am and there was no way for me to get ahold of all the parents of my musical theater kids at work.  So I went in.  I managed through 0 period.  Taught period 1 but by 2nd period, I had thrown up twice (outside of class, thank God) and I just wanted to go home.  I stayed the rest of my morning, but period 2 unloaded large sets from the Sea Container and period 3 watched a totally non-music related movie.  I didn't care. I went home and slept while the girls napped but then they woke I was back to work with them making messes around me.  I'll spare you the gory details but it wasn't too pretty.  I couldn't eat anything.  I had no energy and couldn't stop the quick trips to the bathroom that always came when one of both girls required attention.  My dad dropped supplies off on his way home from work once and played with the girls for about an hour before Christian got home one evening, another day, they picked up Claire and brought her home to let her play at their house for the morning.  Ashlyn was growing fussy and I was so afraid that I was beginning to lose my milk supply for her.  At night, I was either waking to feed her or running to the bathroom.  I needed sleep badly but it just wasn't happening.  I didn't go in to work either Thursday or Friday morning, but I couldn't rest at home and felt terrible about how I was ignoring the girls. But by Friday morning, I felt well enough to eat some saltines and for dinner on Friday, I asked for real food and kept it down.
By Saturday morning, I was fine again and ready to take Claire to swim lessons and go to a family birthday party with the girls.  While it was miserable, I felt blessed that it only lasted 3 days. I was getting Claire ready for her swim class. She seemed 100% fine.  I was putting her shirt over her swimsuit and she threw up. Again and again.  It was awful to see the look on her face.  After it happened she said, "But I go swimming! I go Grammy and Papa's!  I not want to throw up again!"   Sweet girl.  That's what we wanted to happen too, love.  So Christian went to the birthday party by himself and I stayed home with a little girl who got sicker by the hour. I have decided that there are very few things that are harder to watch than your toddler throwing up.  I have friends with chronically, seriously ill children and I have no idea how they deal with watching their child in so much pain all the time because this weekend was heart-wrenching and it was only a weekend. 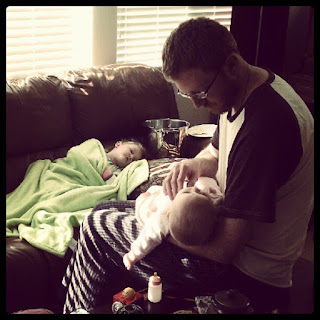 Sunday, we skipped church.  Ashlyn, uncharacteristically, slept through the night Saturday night.  She usually wakes up a few times to nurse and Saturday night I didn't hear a peep out of her.  In the morning, I picked her up and she was burning up.  I nursed her a bit and she threw it all up.  Sunday was the worst day for both girls.  I've never seen Claire so listless. She spiked a fever of 103.9 (on a underarm thermometer) while Ashlyn hit 101. We discussed Urgent Care a few times but went with tepid baths and lots of sleep.  Potty trained Claire was in a Pull Up all weekend and sat next to an empty soup pot at all times.  Ashlyn slept on one of us all day, Claire was on the couch.  She would only speak a few words and only in a whisper.  I worried constantly about dehydration and their high fevers. It was pitiful.
And so Monday, which was the only day both Christian and I had off until May, was spent making sure the girls got better.  It wasn't the "family togetherness" we were hoping for (a hike, trip to the beach, or a picnic in the park was more what I was thinking) but it was togetherness nonetheless.  I am blessed by a few things, however, when I look back at this difficult, messy, sometimes scary, weekend.  I love that we are a family. That we have us.  That we love each other. That I have a husband who cares about his little girls, who didn't think twice about stepping in an helping care for them even though there was a real possibility that he too could have come down with the same illness and he has no sick days at work. 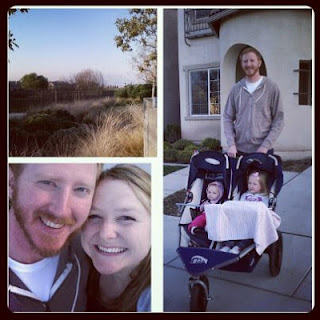 By Monday evening everyone was well enough to go outside --or I, at least decided they were.  The girls were still pretty weak but we all needed the sunshine and so we took everyone for a walk around the block in the stroller before dinner.  It felt good to be out.  I realized I hadn't been since the Wednesday I came home from school feeling so terrible to begin with.  The girls went to bed right afterward.  Ashlyn recovered much more quickly, I'm guessing, due to all the benefits of breastfeeding. Claire asked to go to bed at 6:30.  Didn't want dinner. But I didn't have to go into her room once that night to change her or give her a bath.  The illness had taken it's toll and she was coming out of it, exhausted, but well again.
Today I finally got my girls back.  They were, mostly, themselves.  Claire was tired in the morning for her sitter, is still eating less than normal and her nose is runny and Ashlyn had her last VERY messy diaper but they were smiling again.  Claire joined us for dinner for the first time since last Friday.  We missed her.  I'm not interested in doing that again. But I'm thankful that, so far, our prayers were answered and Christian didn't catch this terrible virus.   Odd thing to inspire me back into the blogosphere but I'm pretty grateful for my family and that gratefulness was heightened during this nasty bug. Who knew? :-)  Regardless, I'm glad to be back from both the Herman President's Day Plague of 2013 and from my absence from this site.
Praise Him from Whom all blessings flow. . . hopefully, you'll see a bit more of us in 2013 :-)
Posted by Sarah at 10:44 PM No comments: