Week 6: Joseph Part 2 (and a few other weekend events)

So this week went considerably better than last week.  Both of our cars worked and even though I had Back to School Night one night this week, we were on schedule this week and didn't have to "do school" over the weekend in order to finish things up.
This week's letter of the week was "E" so we did some practicing writing letter "E" in our copybook.  She really isn't quite getting the concept of writing "on the lines" and I'm thinking I'll probably order this same book again next year for her to complete again.  She likes most of the activities and it'll be really fun to see the difference a year makes and how much she'll, I'm assuming, improve. 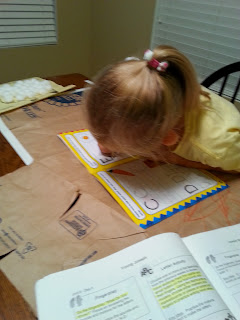 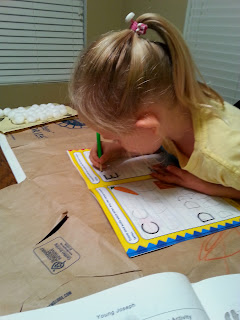 She also completed her "Hide and Seek" page for the week where she circled all the "Es" she finds in her weekly fingerplay poem.  By now, she knows the drill since this program is pretty repetitive. When she gets the Hide and Seek page, she knows exactly what to do. 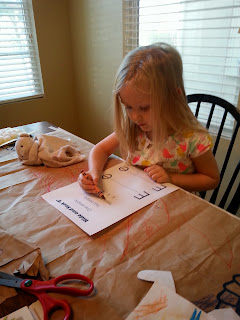 Our stories, this week, focused on Joseph after he is out of prison and has told Pharaoh what his dreams meant!  We made a little picture of a person (we, because she wasn't to sure about drawing a person by herself, so I helped by holding her hand as we drew our figure) that we named "Joseph."  We talked about Egypt and gave him and Egyptian headpiece made out of construction paper.  Mommy's not the best artist so it kind of looked a bit more like a football helmet but it was close enough. :-)  We talked about how Egypt is in a desert area and that the desert has sand.  We raided her sandbox in the backyard and glued the sand to the bottom of the page using a spoon.  She had a blast with this and, although it was pretty messy, it cleaned up just fine. 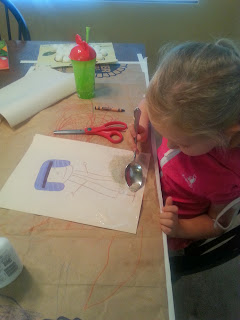 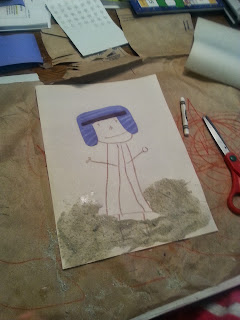 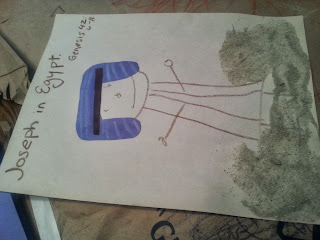 After naptime the next day, I put our giant masking tape letter on the floor of the living room.  She decided that this week she wanted to drive her toy car along the letter and then after she was tired of that, she took her Bear and "walked" him all over the letter.  I think I'll let her decide more what she wants to do with our giant letters each week. 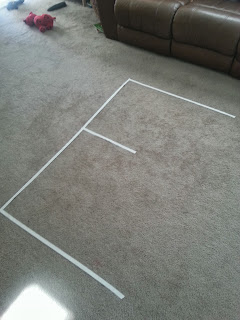 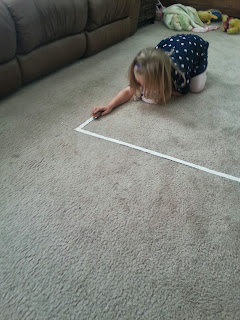 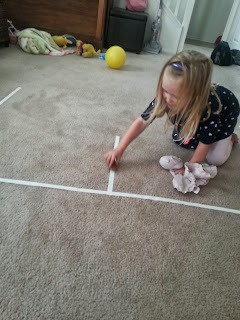 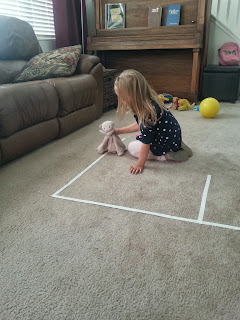 Same day, we glued beans to the letter "E" and what was great about this time, she wanted to glue it herself and she did a great job! 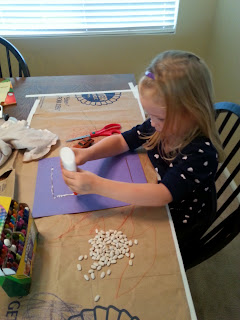 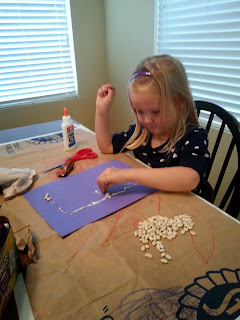 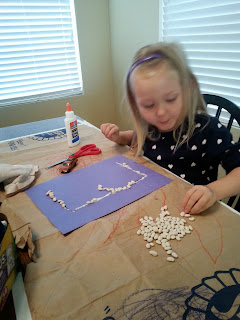 After schooltime, we were able to head out to the park and get some energy out.  It was a beautiful day and for a a while we were the only people at the park and had the whole place to ourselves! 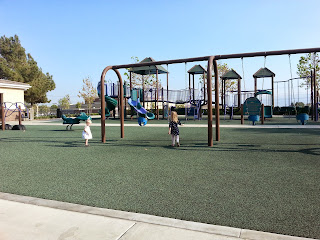 That evening, we settled in for the 1st postseason Dodger game against the Braves.  They won, which always bodes well for the rest of the postseason. . . we hope.  Normally, I'm a stickler about "no eating on the carpet" but we made a "baseball picnic" exception.  I have a feeling that if the Dodgers continue to do well this postseason, we may be making many exceptions to this rule in the next several weeks. 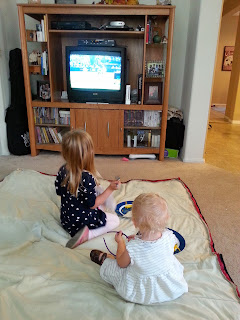 Saturday was a huge day for the girls. My parents have moved into a new house.  The girls are liking it since the backyard has a pond with huge Koi fish.  I'm excited that this will be the house that the girls will be creating memories at as they grow up.  It's not far from my high school and from friends in the Whittier/La Habra area.  It's nice to be back in a familiar area to visit them. 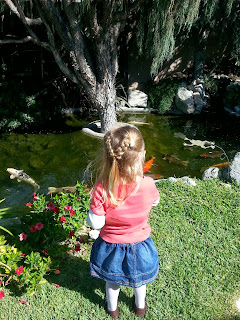 Speaking of, a dear friend of mine since high school threw a 1st birthday party for her little boy on Saturday afternoon.  The girls had a BLAST over there with the other kids at the party.  It's nice to have friends with whom you can pick up with at any time, like no time has passed. . . 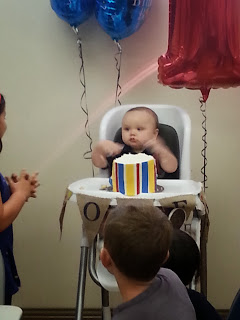 Saturday night ended something like this. . . Claire thought Ashlyn's tummy was perfect for a canvas and decided to draw all over sister.  Ashlyn didn't seem to mind.  Only problem. . . she'd just gotten out of the bath.  Oh well.  I always say, "good thing kids are washable." 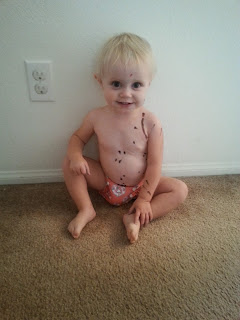