First Dodger Game/Hello Kitty Bobblehead Night
I great milestone was reached this week for the girls.  Months ago, Christian and I noticed that on the Dodger Schedule, "Hello Kitty Bobblehead Night" was scheduled for Monday, September 9th at 7:10pm.  Not really considering the wisdom of dragging our children out to Los Angeles, close to bedtime on a weeknight, we excitedly, bought tickets for the game.  I have been a Dodger fan since I was very young. My Uncle Steve was a big fan so I decided I would be too.  1988 was a great year for me.  3rd grade and the Dodgers won the series.  It's been a bumpy ride for a fan ever since then but this season's been great and I'm glad we decided to do this crazy thing Monday Night, even if waking up at 5am the next morning for work wasn't, exactly a picnic.  Thanking God for Starbucks and students who give giftcards for that place. The girls did remarkably well at the game and having the theme of the evening be Hello Kitty made it perfect for the girls.  It took us a while the get there and, since the Dodgers are currently winning, the crowds going into the park were pretty crazy.  It look us a very long time to get into the stadium and I think we finally made it to our seats at about the second inning.  They were playing the AZ Diamondbacks and there were several big moments during the game, notably the Home Run Hat Trick by Juan Urribe.  Claire's comment after each home run, "Everyone's is so loud!!"  Ha!  But she understood it was because the Dodgers were winning and that was good for her!  At the 7th inning stretch, Hello Kitty (someone dressed in a character suit) was up on the Jumbotron.  She was "Singing" down below.  Claire almost bolted out of her seat, wanting to "go down and hug her. . . " She was so excited, I felt terrible having to tell her "no"  Luckily, the game was interesting enough for her and she didn't get too upset that she was so close but so far from meeting a celebrity.  Ashlyn was our biggest concern, since the game started at her bedtime but she did great.  I'm really, really impressed with both of them.  It was nice to be together at the stadium as a family.  Several times during the game, however, I'd look over at Claire and she'd look so, so sleepy.  I'd ask if she was tired and she'd flick her eyes wide open and say, "No, mommy!  I watching the game!"  Made me proud, but we left in the 7th inning.  Lucky for us, the game was not close, and we didn't miss a major upset while driving home.  Dodgers won 8-1. 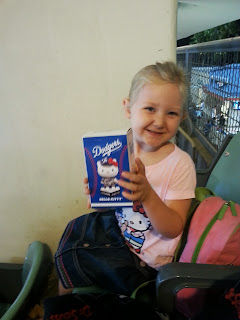 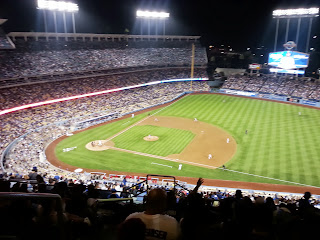 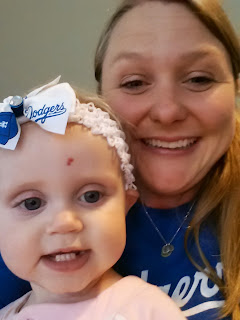 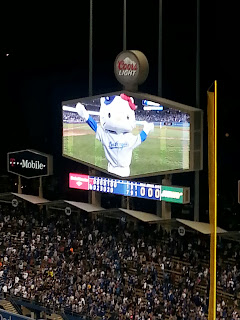 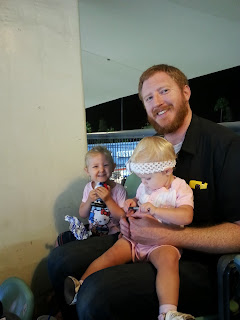 Week 3: Abraham
So, with all the excitement Monday night, preschool this week was a little less structured.  In fact, to squeeze elements of the Abraham story as well was work on our letters and some numbers, we had Herman Family Saturday School and then rest the last Abraham story and discussed it before bed tonight (Sunday).  There will be weeks like this, and the great thing about doing it a home this way is there IS that flexibility to do our formal learning whenever works for us!
The letter of the week was "C"  According to the book, I should have had Claire do this project with cottonballs.  Well, mama was fresh out of cottonballs and (remember that Dodger game?!) had plenty of sunflower seeds so a "sunflower seed "C"" it was. 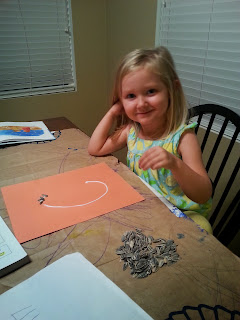 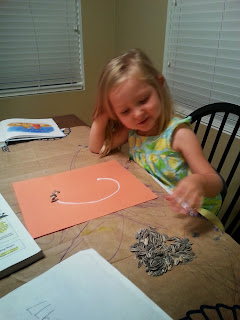 Our focus, thoughout the Abraham stories was how God keeps his promises (much like how we ended our Noah and the flood lessons) and how important it is to trust God like Abraham did.  First, Abraham had to trust God when he told him to pack up and leave Ur to live like a nomad. Then he had to trust God when Lot took the best land for his flocks and THEN he had to trust God to keep him promise that Abraham would have a son and he'd have as many descendants as the stars.  Claire mad a little craft that represented Abraham trust God with his life when he made him travel from his home (she colored and mommy folded a 3x5 card into a little tent) and then Claire painted "stars" on a black sheet of construction paper using a balled up piece of paper towel.  I didn't know how much of everything she truly got until we took the story and craft with us to Sunday School at church (we have a preschool lesson for the kids during the sermon) and she was able to tell much of the story.  It was pretty neat to see what she had learned. 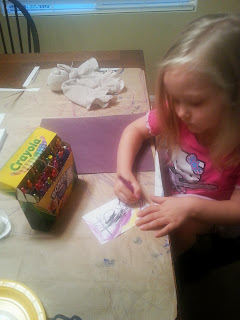 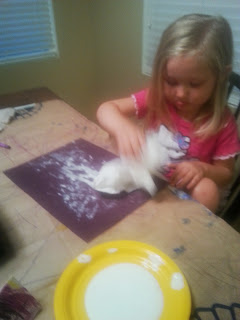 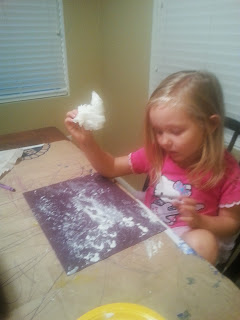 We did some more "letter C" fun.  I am still totally amused at how excited she gets about the tape letter on the floor.  I'm hoping she keeps this excitement up for the next 23 weeks/letters.  This time she was supposed to take a toy car and move it along the letter while making the letter sound for "C."  She insisted on wearing the tutu (that is way too small for her, btw, but she doesn't care). 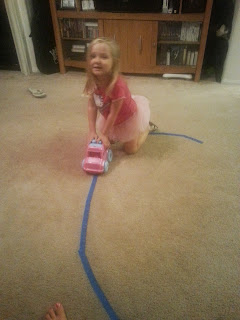 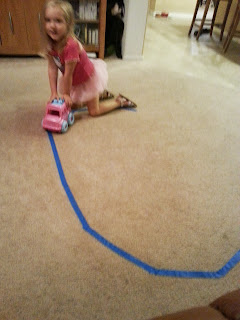 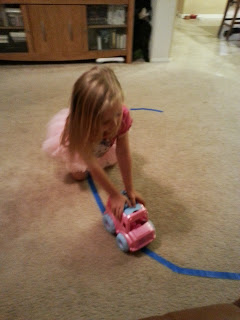 One thing that I think is so fun and effective about this program is the fact that they get to act out the stories a couple times a week.  In the book it said to make a tent out of a sheet.  I wasn't sure where I'd hang the sheet so I just pulled out our Kidco Peapod and that was our "Abraham Tent"  Then I turned on Claire's Twilight Ladybug and then we turned off the lights (one time when doing school at night after dinner was a good thing for us!) and we reviewed the story of God promising Abraham his family would be more than the number of the stars.  We talked about how you can't count the stars; there are too many! 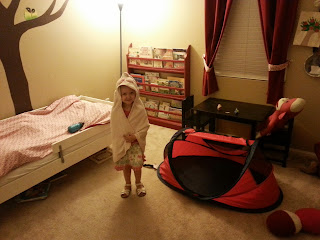 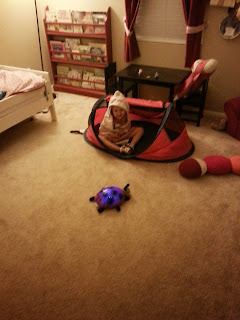 And, of course, we did our "bookwork."  I've mentioned before that this program stresses letters and their sounds and Claire is already very familiar with those so we are having her practice writing letters.  She, actually, seems to enjoy it, although, needs encouragement.  Sometimes, she'll blurt out "I CAN'T!" if a letter looks difficult.  I usually make her try it and she always is so pleased with herself when she does it. 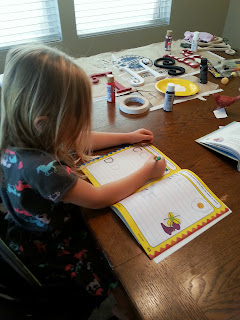 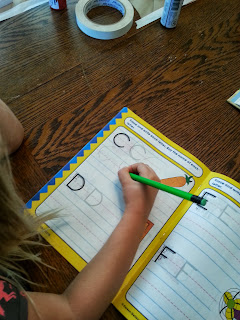 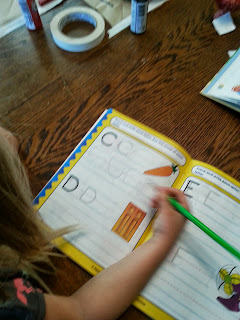 This was another "act out the story" day.  It was the day we talked about Abraham entertaining the 3 visitors from heaven and their message to Abraham about his promised baby boy!  We had a "picnic" with three of her stuffed animals and talked about how God wants us to be hospitable and kind to others.  We never know when we may be "entertaining angels." 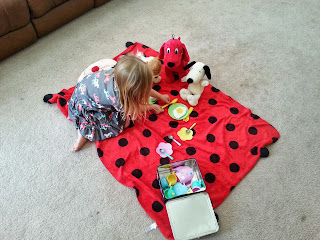 Our last picture for the week is of our Sunday School classroom.  Just Claire and Logan and Ashlyn this week.  A little chaotic but fun anyway :-) 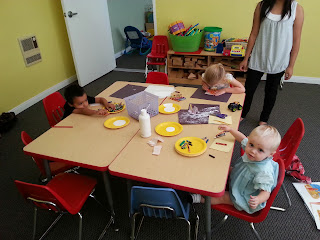 At bedtime, tonight, we read and talked about the story of Abraham and God asking him to sacrifice Isaac to test his love for God.  Sure a multifaceted story for a 3 year old, but we talked about how important it is to love nothing more than we love God.  We need to be willing to give up whatever He asks us to and how that's not always, and often isn't easy.  This homeschooling thing is not just teaching Claire truth, but hitting mommy's heart too.  So even though it was a crazy, busy, somewhat off week, we were able to make it a productive week, too.  Hardly a second to breathe, but on to next week!
Posted by Sarah at 9:53 PM